Home About Beacon Press
Previous month:
May 2008
Next month:
July 2008

In the department of jobs you may not have known existed, Kate Braestrup is the chaplain for the Maine Game Warden Service. Lest you think that she spends her time blessing moose and praying for trout, read this excerpt of... Read more →

Posted at 12:05 PM in Fiction, Literature, and the Arts, Publishing News, Race and Ethnicity in America, Religion | Permalink | Comments (0)

What Were They Thinking? United States v. Williams and Free Speech

What Were They Thinking? United States v. Williams and Free Speech

Roughly a month ago, the United States Supreme Court handed down a decision in United States v. Williams that upheld the consitutionality of the Prosecutorial Remedies and other Tools to end the Exploitation of Children Today Act of 2003 (The PROTECT Act). The 7-2 decision is the latest in a disturbing line of Congressional actions and Supreme Court decisions that cloak encroachments on the First Amendment in the pious garb of protecting children. Read more →

Posted at 01:32 PM in Activism, American Society, Children and Family, Frederick S. Lane, The Court and the Cross | Permalink | Comments (1)

Pride and Sports: An Interview with Pat Griffin

Pride and Sports: An Interview with Pat Griffin

For Pride Month, Beacon Broadside invited Pat Griffin, director of It Takes A Team! Education Campaign for Lesbian, Gay, Bisexual, Transgender Issues in Sport, to discuss the issue of homophobia in sports. Dr. Griffin is the author of Strong Women, Deep Closets: Lesbian and Homophobia in Sports and co-editor of Teaching for Diversity and Social Justice: A Sourcebook for Teachers and Trainers. The interview questions are from Helen Wheelock, a regular contributor to the Women's Hoops Blog and the Women's Basketball Coaching Association's magazine, Coaching Women's Basketball. Read more →

There have been gay poets—or, at least (if you prefer historical accuracy) poets who presented same-sex erotic passion—for as long as poetry has been written down; maybe longer. Think of Sappho, whose name has referred for centuries both to the idea of eros between women and to the ancient idea of lyric itself: think of what may be her single most famous poem, "He seems to me equal to a god, that man/ Who sits beside you," its first sentence a feint towards opposite-sex desire, its substance an homage to the young woman Sappho loves. Shakespeare's sonnets, most of them addressed to a comely young man, have inspired centuries of arguments about his erotic investment in, "the master-mistress of my passion." Walt Whitman insisted that he wrote for, and about, both women and men, but what records there are tell us that he loved men; he put his poems about same-sex love ("adhesiveness," as he called it) in a discrete segment of his lifework, Leaves of Grass, entitled "Calamus" (after the phallic plant of the same name): Whitman inspired what later became gay movements as his poetry circulated internationally—in England, Edward Carpenter and J. A. Symonds thought they had found in his work a model for gay Utopia. Federico Garcia Lorca's "Ode to Walt Whitman" called together, under Whitman's name, the stigmatized homosexual men of the Old and New World, trying to wring new lives from their frequent self-hate. Read more →

Posted at 12:04 PM in Fiction, Literature, and the Arts, Queer Perspectives | Permalink | Comments (7)

God and Man at Dartmouth

God and Man at Dartmouth

I chuckled to myself wondering what William F. Buckley, the author of the landmark conservative tract God and Man at Yale, might have thought of this year's Baccalaureate Service at Dartmouth College. In addition to Christian hymns and Bible readings, there was a Native American prayer offered in the Yuchi language, and recitations from the Hindu and Buddhist traditions. The main speaker – yours truly – was a Muslim. Read more →

Trans people aren't broken. We aren't looking to be "fixed," and we have no need of a repairman. We have spent decades trying to convince the Western world of this, and forgive us if some in our ranks were starting to feel a little optimistic about our progress – until, maybe, now. Read more →

On June 19, 1865 Union soldiers arrived in Galveston, Texas and let people know that the Civil War had ended and the enslaved were free. This news—and the Union soldiers necessary to enforce the law—made it to Galveston two and... Read more →

Posted at 03:16 PM in American Society, Children and Family, Environment and Conservation, History, Race and Ethnicity in America | Permalink | Comments (3)

Lesbian couples raising children in the suburbs of my city, Washington, DC, got a one-two punch in the last three weeks. First the Maryland Court of Appeals ruled that when only one member of the couple had adopted the child they were both parenting, and then the couple split up, that the child had only one mother….and that mother can decide whether to maintain or stop contact between the child and the other mother. Since 2000, Maryland courts had been awarding visitation rights in this situation. Not anymore:the highest court in the state said there’s no such thing as a “de facto” parent with rights to continue a relationship with a child she has raised. Read more →

Posted at 11:01 AM in American Society, Children and Family, Civil Rights, Queer Perspectives, Race and Ethnicity in America | Permalink | Comments (1)

Yale Environment 360, a new online magazine from the Yale School of Forestry and Environmental studies, launched last week. Among the stellar commentary from leading voices in the environmental movement is Beacon's own Fred Pearce, whose piece "Water Scarcity: The... Read more →

Pride month is a chance to pay respect to our brothers and sisters who have worked all year to secure the rights of GLBT folk everywhere: by campaigning, organizing, marrying, or joining the PTA as same-sex parents. It's an opportunity to reflect upon the past year and all that was accomplished in the name of GLBT equality and all that needs still to be done. Most of all it's a chance to celebrate with beads, bikinis, and martinis. Read more →

Posted at 11:59 AM in American Society, Children and Family, Queer Perspectives | Permalink | Comments (0)

The Shoulders Barack Obama and Hillary Clinton Stand On

The Shoulders Barack Obama and Hillary Clinton Stand On

Oregon—where I live—held its primary election on May 20. For the first time since I moved here for college in 1972, the primary actually meant something to the presidential contest. Always in the past our primary is so late in the game that the presidential candidates for both parties have already been crowned. This exceedingly white state handed a man of color an 18-point margin of victory over a woman. That same day, far across the country in Kentucky, voters there handed that same woman a 35-point victory over the man of color. Read more →

Almost 35 million Americans – 11.3 percent of the population - were classified as food insecure or very food insecure (a term that used to mean "hunger") by the U.S. Department of Agriculture in 2006. Not coincidentally, this is almost the same number of Americans who live at or below the nation's official poverty level (the food insecurity rate is likely to increase when tallied again this fall). When those folks are combined with 57 million Americans who are considered near-poor, we have nearly one-third of a nation already struggling to put food on the table. Read more →

Posted at 10:52 AM in Activism, Environment and Conservation, Politics and Current Events | Permalink | Comments (0) 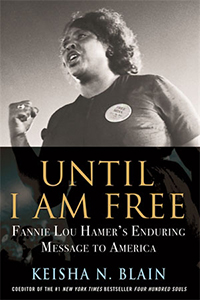 Now on Sale: Until I Am Free