I've been doing some research on the Supreme Court during the 1930s, and have run across some interesting comments from Justice Harlan Fiske Stone on dissenting. Stone was a progressive Republican appointed to the Court by Calvin Coolidge. He served as an Associate Justice under Chief Justices William Howard Taft and then Charles Evans Hughes, before Franklin Roosevelt appointed him Chief Justice in 1941. Read more →

Everyone here at Beacon Press is deeply saddened by the deadly shooting last Sunday at the Tennessee Valley Unitarian Universalist Church in Knoxville, in which two people were killed and seven others injured. Police reports indicate that the shooter targeted... Read more →

At the Root, Kai Wright discusses the hit black homeowners are taking in the mortgage foreclosure crisis, a topic he addressed earlier in this excellent article at The Nation. Kai has previously contributed to Beacon Broadside on gay teens and... Read more →

Another homosexual brouhaha is brewing. Psychologist Trayce L. Hansen has reviewed nine studies that examined the sexual orientation of children raised by same-sex parents and has concluded that children raised by same-sex parents "have a 4 to 10 times greater likelihood of developing a non-heterosexual preference than other children." Read more →

Death is central to my definition of religion: religion is our human response to the dual reality of being alive and having to die. We are not the animal with advanced language or tools as much as we are the religious animal. Knowing that we must die, we question what life means. The answers we arrive at may not be religious answers, but the questions death forces us to ask are, at heart, religious questions. Where did I come from? Who am I? Where am I going? What is life's purpose? What does all this mean? Read more →

The Perils of Parables

The Perils of Parables

It is no secret that the evangelical wing of the Republican Party has some strong reservations about the presumptive Republican presidential nominee, Senator John McCain. The "agents of intolerance" charge that McCain leveled at Pat Robertson and Jerry Falwell during the 2000 primary, for instance, has not been forgotten. Nor were evangelicals pleased when McCain so quickly disavowed two prominent evangelical preachers, the Rev. John Hagee and the Rev. Rod Parsley, for making controversial statements about Islam, Hitler, and the Holocaust. Read more →

Posted at 10:43 AM in Frederick S. Lane, Politics and Current Events, Religion, The Court and the Cross | Permalink | Comments (0)

Mark Winne, author of Closing the Food Gap: Resetting the Table in the Land of Plenty, will be participating in Slow Food Nation, "the first-ever American collaborative gathering to unite the growing sustainable food movement and introduce thousands of people... Read more →

Posted at 12:05 PM in Environment and Conservation, Politics and Current Events, Race and Ethnicity in America, Religion | Permalink | Comments (0)

Is Talking About Age "Ageist"?

Is Talking About Age "Ageist"?

The McCain campaign and its supporters cry foul when anyone even whispers that, if elected, he will be 72 years old when he puts his hand on the bible to take the oath of office. But if it's ageist to ask whether a 72-year-old has the mental, emotional, and physical stamina to take on what is undoubtedly the biggest and toughest job in the world, what label do we give to the common corporate practice of not hiring people over 50? Ageism-Plus? And what to the real prejudice that reduces the old to caricatures from whom we want to turn away lest they somehow contaminate us with their "oldness?" Ageism-Squared? Read more →

Colombia Hostage Rescue Cause for Joy and Sadness

Colombia Hostage Rescue Cause for Joy and Sadness

The news that the Colombian military had successfully rescued 15 hostages held by the Revolutionary Armed Forces of Colombia (FARC) spread quickly around the world. The story was deemed newsworthy by most mainstream media outlets because the leftist guerrilla group's four most high-profile hostages—former presidential candidate and Colombian-French citizen Ingrid Betancourt, and three U.S. military contractors—were among those liberated. The liberation of the hostages has conveniently shifted media focus away from yet another political scandal in which the administration of Colombia's President Alvaro Uribe finds itself mired. Read more →

Should we think that our current problems as a nation—the falling value of the dollar, a perilous dependence upon overseas products, an administration that favors the wealthy over the ordinary man, and an edgy attitude towards women in politics—are unique to 2008, they also worried a nearly forgotten Founding Mother over two hundred and twenty years ago. Read more →

The end of the Supreme Court's term gives me a chance to reflect on some of the dissents that the justices wrote. The question I want to explore – which I deal with in some of the essays accompanying the opinions I've reprinted in I Dissent – is this: Why bother to dissent, especially at great length? Read more → 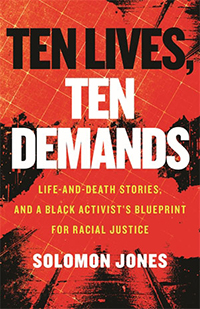