Today's post is from Rabbi Danya Ruttenberg, author of Surprised by God: How I Learned to Stop Worrying and Love Religion. This post originally appeared at her blog. 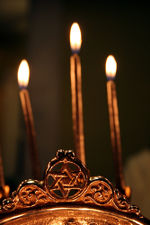 A lot of people have trouble with Hanukah. I did, for years. I'd go to parties and nibble on my latke or sufganiya while grumbling under my breath about how there was nothing here to celebrate. I'd light my hanukiyah (menorah), but I'd only do the bare minimum needed to fulfill the mitzvah and I'd do my best not to enjoy it.

My problem then, and the problem of the people who this year have already informed me that they're all but going to boycott the holiday, is that the history of this particular celebration is, well… complicated.

The war through which we celebrate Hanukah was, in part, a Jew-on-Jew civil war, in which zealous traditionalists attacked and killed more assimilationist Hellenized Jews. The catalyst for the violent revolution was the reigning Syrian Greek king, Antiochus IV, who demanded that Jews worship false gods and violate the Sabbath, or die. The Jews who refused to do this were not very pleased with the ones who did. 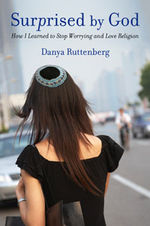 Historically speaking, the miracle of Hanukah is that this small, bandit guerrilla army (the zealots) triumphed over Antiochus' large army and formidable weapons, against all odds, not only taking back the desecrated Temple, but re-dedicating it as well.

The "Hanukah miracle" with which most kids are raised was apparently invented by rabbinic sages living 300-600 years after the Maccabean events took place—the first time we hear the story of oil that was meant to last for one day but instead burned for eight is in the Talmud. It's not clear exactly when the story originated, but some scholars posit that the tradition originated when some of the rabbis still living persecuted under Roman rule figured it wouldn't be that clever to publicly celebrate a holiday marking the violent overthrow of a foreign government, particularly (possibly) in light of the failed Bar Kochba rebellion. So, instead, they came up with the much more kid-friendly version about the oil which, conveniently, lends itself much more to spiritualized interpretations of Hanukah.

Why was it eight days originally? There are a few theories. One suggests that the Maccabees were too busy waging war to celebrate Sukkot on time, so they did so later—but that doesn't explain why Hanukah would become a whole separate holiday in subsequent years. Two others offer a little more irony: one suggests that an eight-day winter festival of lights was widespread in Greek, Roman and Babylonian Antiquity, and another notes that that's how long the Greeks celebrated their military victories.

All this, frankly, wasn't even enough to bother me–not even the Jew-vs-Jew part. That's nothing new as Jewish history goes. What happened afterwards, however, was really disturbing. After the Hasmoneans/Maccabees/Zelots/heroes of our story won, once Israel was reclaimed and the Temple restored, Judah, the Hasmonean leader, and his brothers set to making a mighty Hebrew nation, by force. First they attacked the non-Jews on their own Hasmonean turf. As it says in the apocryphal Book of Maccabees, "they forcibly circumcised all the uncircumcised boys that they found within the borders of Israel." (I Mac 2:46) As if that weren't bad enough, Judah "Maccabee" "took [a Gentile-filled] town, and killed every male by the edge of his sword, then he seized all its spoils and burned it with fire." (I Mac 5:28). He then did the same thing to the innocent people in Maapha, Chaspho, Maked, Bosor, other towns in the region of Gilead, Hebron, Marisa, Azotus, and other places in the land of the Philistines. There are a lot of stories; when the army "saw a tumultuous [wedding] procession with a great amount of baggage, they rushed on them from the ambush and began killing them… the wedding was turned into mourning and the voice of their musicians into a funeral dirge." (I Mac 9:39-41)

The people that were killed or circumcised here were innocent. I don't feel any more OK that it was "our guys" doing the unprovoked attacking and killing; that makes me feel worse, more uncomfortable, more upset, and I feel compelled to take some sort of responsibility for it.

One can, perhaps, understand why this holiday made me so angry for so long—why I'd go to synagogue and blurt uncomfortable facts about military history while everybody else was trying to enjoy a nice game of dreydel. It wasn't really a fun place to be.

Then something shifted. I don't know what, or why. One year, though, I started sitting meditation in front of my Hanukiya every night, sitting and breathing with the candles as they burned, thinking about renewal, rededication, how to make something from what seems to be the utter desolation of nothing. It's not that I had forgotten the atrocities committed at the end of the Hasmonean war, it's that… they didn't block me anymore. Rather, I began to wonder how I might be able to clean up the despoiled Temple of our history, to once again sanctify my faith—in Hanukah, and in celebrating Judaism as it exists today—even after everything my ancestors had done.

A few years ago, I took a class on Biblical criticism—scholarly theories about who wrote which parts of the Bible when, and why. In class, the professor and my rabbinical student colleagues talked a lot about a sort of a two-mindedness that they think is necessary to be able to both understand probable historicity of the text and to experience them as sacred documents. When teaching, you're a serious scholar, when praying you're a religious Jew, and never the twain shall meet.

And yet, it doesn't have to be that way. Paul Ricoeur talks about a "second naïveté," the ability to see God shining through the words of the Bible even after one has been immersed in the potentially cynicism-inducing theories of Biblical authorship. Me, I had learned about all this Biblical criticism stuff way back in college, before I believed in God, before I was interested in practicing Judaism. It had seemed perfectly rational and didn't bother me—so maybe I never had a first naïveté.

A few years later, God showed up pretty powerfully for me (or, more likely, I showed up for God) and I began using the language of "revelation" a lot. It didn't matter that I knew perfectly well that historically speaking, the revelation at Mt. Sinai story in Exodus 19 and 20 were likely written by this or that authorial school embedded in particular human contexts. It just didn't matter. That information didn't impede my experience of Divine radiance pouring through me and around me, making the events on Sinai look more and more plausible. The God I was starting to meet glowed quite a bit like the God described in the Sinai story, and seemed, increasingly to me, to be utterly capable of the events narrated on those pages. Whether the stories in the Torah were literally or metaphorically true, they were telling me something about the nature of the God I had already begun to meet. The Torah, I began to see, was true on its most important terms.

As such, the two-mindedness advocated by my teacher struck me as a bit schizophrenic, and maybe not the most mature theological approach. Isn't God bigger and more radiant than a few historical facts here and there? Can't we do better, shoot for more? Dare I say… integration?

A mature adult faith demands that we take in difficult, painful facts and allow them to become part of our understandings of God, our language of faith and connection. Hanukah is not a holiday about innocence. Neither is Purim, actually–Jews did some slaughtering there, too.

Part of adult faith is being able to look truth in the eye, to take responsibility for it, and to not get stuck by the fact that it's not an easy story. It certainly requires us not to take our frustrations out on God. I know too many people whose faith was seriously shaken by Biblical criticism–as though God changes just because our understanding of history might. As though God weren't bigger and far more expansive than that. As though it's God's fault that we're just getting some new information. As if it's God's fault that human beings sometimes behave in ways that are unforgivable. As though God's Divinity might not shine through texts written at different times and places, for different reasons.

An adult relationship to our tradition has to include the facts of, in this case, bad human behavior and Jewish culpability, and yet also maintain the awe and reverence that God Godself deserves. Is there any reason that I can't be grateful for the survival of the Jewish religion while condemning the actions of those who were involved in its (miraculous) survival?

Or, to put it another way, perhaps our question is not, "How can we possibly celebrate God and miracles if God didn't save our pure souls from the evil hands of others?" but, rather, How might we celebrate God and miracles while acknowledging the many complex ways in which our own hands have impacted history? How might our theology shift to accommodate the awareness that our miracles have sometimes had painful consequences for others? How might we now celebrate renewal, rededication, re-sanctification with a greater understanding not only of what it means to receive light, but also to give it out? What might that mean about what we do in the world today, what action we take as unforgivable atrocities rage just outside our door? We leave our Hanukiot in the windows of our houses to publicize the miracle that is God's ongoing manifestation in the world–how might our behavior, our actions, similarly reflect our desire for all to partake of God's miraculousness?

We have to be honest about the history that's happened, to take responsibility for what has been done by Jewish hands and to use what's past to spark discussion and action about how to behave in our world today. We can and should embrace the rededication of our souls, hearts and minds on a spiritual level, and we should also use these tropes of rededication to look at the world at large, to see what has been defiled and how we can make it holy again. And maybe, after all, being able to move past a child-like faith into something more integrated and whole is, in itself, a sort of re-dedication, re-sanctification–in itself kind of a miracle.

Today's post is from Rabbi Danya Ruttenberg, author of Surprised by God: How I Learned to Stop Worrying and Love Religion. This post originally appeared at her blog.

A lot of people have trouble with Hanukah. I did, for years. I'd go to parties and nibble on my latke or sufganiya while grumbling under my breath about how there was nothing here to celebrate. I'd light my hanukiyah (menorah), but I'd only do the bare minimum needed to fulfill the mitzvah and I'd do my best not to enjoy it.

My problem then, and the problem of the people who this year have already informed me that they're all but going to boycott the holiday, is that the history of this particular celebration is, well… complicated.

The war through which we celebrate Hanukah was, in part, a Jew-on-Jew civil war, in which zealous traditionalists attacked and killed more assimilationist Hellenized Jews. The catalyst for the violent revolution was the reigning Syrian Greek king, Antiochus IV, who demanded that Jews worship false gods and violate the Sabbath, or die. The Jews who refused to do this were not very pleased with the ones who did. 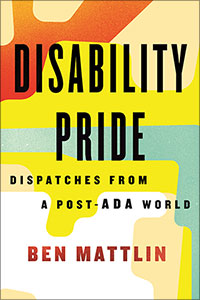