Home About Beacon Press
Testimonies from the Desert: What’s behind our Standard of Living?
Fran Hawthorne: Green Advice Books and Reality

Beginning around 1980, the World Bank and the IMF began imposing a one-size-fits-all formula for development, called structural adjustment programs. These required borrowing countries to adopt a package of economic reforms, such as privatization, ending subsidies and price controls, trade liberalization, and reduced worker protections. After more than two decades, there is no strong evidence that this approach has achieved its stated goal of stimulating growth, while the toll on working people has been staggering. The IRCA commission report acknowledged the potential for harm by noting that "efforts should be made to ease transitional costs in human suffering."

The North American Free Trade Agreement, however, was not intended to relieve human suffering. 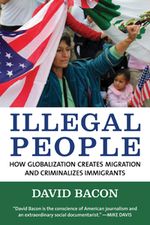 Mexico hoped to negotiate a commercial treaty, to gain access to U.S. markets for Mexican goods and raw materials, which had often been barred by protective tariffs imposed by the U.S. Congress. The United States and Canada sought, on their part, to make it easier for foreign companies to move money and goods across the border, to invest in Mexico, and to protect that investment. But in 1994, the year the treaty took effect, U.S. speculators began selling off Mexican government bonds. According to Jeff Faux, founding director of the Economic Policy Institute, "The peso crash of December 1994 was directly connected to NAFTA, which had created a speculative bubble for Mexican assets that then collapsed when the speculators cashed in."

The government devalued the peso, trying to prevent a flood of money back to the north, but also allowed bankers to freely exchange pesos for dollars. As businesses tried to repay debt with pesos worth only half as much, bankruptcies spread. According to Harvard history professor John Womack, the old "nationalists," many now private billionaires, took control of government policy. In the ensuing political crisis, the new president, Ernesto Zedillo, made a deal with U.S. treasury secretary Robert Rubin. Goldman Sachs and New York and Spanish banks took control of the Mexican banks, and were guaranteed payment for refinancing Mexico's debt. "I think about eighty percent of Mexico's finances now runs through New York and London," says Womack. "The new Mexican government surrendered, conceded, and abandoned all the protections for Mexican businesses and producers." The arrangement negotiated with Rubin, he says, "was much more about finances than about trade, much more about the movement of capital, the creation of debt and derivatives, and the pursuit of speculation than about the movement of commodities."

The U.S. government guaranteed the bailout, and in return President Bill Clinton demanded that Mexico use oil exports to guarantee debt payments to the banks. Mexico had historically used its oil income to finance government expenditures, keeping taxes extremely low for businesses and the wealthy, while starving the state oil company PEMEX of capital for modernization and expansion. Using oil income to pay debt made matters even worse. In 2006 Manuel López Obrador, the PRD's presidential candidate, said he would ease the pressure on Mexicans to migrate by raising the income of the poor in the countryside. But even if a popular government had been elected, as seemed possible that year, it would not have had Mexico's main source of income available for alleviating poverty, granting rural loans, rescuing dilapidated social security clinics, or raising teachers' salaries and building more schools in Oaxaca.

Mexico lost a million jobs, by the government's own count, in 1995. That experience was repeated in 2000–2001, when recession in the United States, and the decline in consumer purchasing, led to the layoff of over four hundred thousand workers in the maquiladoras. NAFTA became an accelerant, pouring gasoline on the fire of economic reform.

Instead of creating prosperity, it displaced workers and farmers at an ever greater rate.

The economic reform process required the Mexican government to dissolve the CONASUPO stores. Mexican subsidies to farmers were ruled illegal, although the U.S. continued paying huge subsidies to its largest growers under the provisions of the U.S. farm bill, while buying enormous quantities of farm commodities. At the same time, CONASUPO's state-run stores were held a barrier to the entry of private companies into the retail grocery business.

The ability of U.S. producers to grow corn cheaply using intensive industrial methods affected Mexican growers long before NAFTA. In the 1980s Mexico became a corn importer, and according to Sandoval, large farmers switched to other crops when they couldn't compete with U.S. grain dumping. But with no price supports, hundreds of thousands of small farmers found it impossible to sell corn or other farm products for what it cost to produce them. And when NAFTA pulled down customs barriers, large U.S. corporations dumped even more agricultural products on the Mexican market. Rural families went hungry when they couldn't find buyers for what they'd grown. It's no accident that the Zapatista National Liberation Army, based in poor indigenous communities in Mexico's southernmost state, Chiapas, planned the beginning of an armed rebellion for the day NAFTA took effect. The Zapatistas knew what would happen to indigenous communities in the southern countryside. And the final elimination of tariffs on white corn, beans, and other farm goods on January 1, 2008—the implementation of NAFTA's final chapter—was greeted by demonstrations across Mexico.

Mexico couldn't protect its own agriculture from the fluctuations of the world market. A global coffee glut in the 1990s plunged prices below the cost of production. A less entrapped government might have bought the crops of Veracruz farmers to keep them afloat, or provided subsidies for other crops. But once free market strictures were in place, those farmers paid the price instead. Veracruz campesinos joined the stream of workers headed for the Smithfield plant in North Carolina and points beyond.

Poor people in the cities fared no better. Although a flood of cheap U.S. grain was supposed to make consumer prices go down, the opposite occurred. With the end of CONASUPO and price controls, the price of tortillas more than doubled in the years that followed. Higher prices intensified urban poverty, increasing the pressure to migrate. One company, Grupo Maseca, monopolized tortilla production. On its board of directors are Federico Gorbea Quintero, president of Archer Daniels Midland México, and Ismael Roig, ADM's vice president for planning and business development. (ADM is one of the United States' largest corn producers and processors.) Carlos Hank Rhon, whose family formerly controlled CONASUPO, is now also a Grupo Maseca director. Meanwhile, Wal-Mart has become Mexico's largest retailer.

Under its former development policy, foreign automakers like Ford, Chrysler, General Motors, and Volkswagen had been required to buy some of their components from Mexican producers. Workers labored in the parts plants that produced them. NAFTA forbids governments from requiring foreign investors to use a certain percentage of local content in their production. Without this restraint, the auto giants began to supply their assembly lines with parts from their own subsidiaries, often manufactured in other countries. Mexican parts workers lost their jobs by the thousands.

"The financial crashes and economic disasters drove people to work for dollars in the U.S., to replace life savings, or just to earn enough to keep their family at home together," Womack says. NAFTA didn't reduce migration, as the IRCA commission predicted. Following the 1994 crisis, it produced it. More than 6 million Mexicans came to live in the United States in the thirteen years after the treaty went into effect. In just five years, from 2000 to 2005, the Mexican population living in the United States increased from 10 to 12 million, and the government predicted annual migration would soon reach four hundred thousand per year. With few green cards, or permanent-residence visas, available for Mexicans, most migrants were undocumented.

Award-winning photojournalist, author, and immigrant rights activist David Bacon spent over twenty years as a labor organizer. His books include The Children of NAFTA, Communities without Borders, and Illegal People, and The Right to Stay Home. He is an associate editor at Pacific News Service and writes for the Nation, American Prospect, Progressive, and San Francisco Chronicle, among other publications.

Beginning around 1980, the World Bank and the IMF began imposing a one-size-fits-all formula for development, called structural adjustment programs. These required borrowing countries to adopt a package of economic reforms, such as privatization, ending subsidies and price controls, trade liberalization, and reduced worker protections. After more than two decades, there is no strong evidence that this approach has achieved its stated goal of stimulating growth, while the toll on working people has been staggering. The IRCA commission report acknowledged the potential for harm by noting that "efforts should be made to ease transitional costs in human suffering."

The North American Free Trade Agreement, however, was not intended to relieve human suffering.