“You Have the Right to Remain Silent”

Today's post is from Frederick S. Lane, an author, attorney, expert witness, and lecturer who has appeared on "The Daily Show with Jon Stewart," CNN, NBC, ABC, CBS, the BBC, and MSNBC. His fifth book is American Privacy: The Four-Hundred-Year History of Our Most Contested Right.

"The approach," John Roberts said in a memo written in the summer of 1981, "was to avoid giving specific responses to any direct questions on legal issues likely to come before the Court." In effect, Roberts was advising O'Connor that she had the right to remain silent, because anything she said could and would be used against her. It is an approach that has been followed religiously by Supreme Court nominees ever since, including Roberts himself during his 2005 confirmation hearings to succeed the deceased Chief Justice William Rehnquist.

For conservatives, it is clear that silence has been golden. 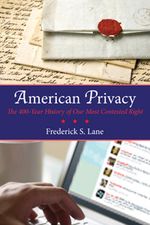 Since Justice O'Connor's confirmation, nine other justices have been appointed to the Court, six by Republican presidents and three by Democratic. The steadfast adherence of recent nominees to what should be called the Roberts warning has essentially neutered the Senate's ability to advise and consent (its constitutionally-mandated role in the nomination process), and has enabled the confirmation of a series of more-conservative-than-they-sound members of the Court. The American public's grasp of what the Court does and its importance in their day-to-day lives is tenuous at best, but the Kabuki theater that masquerades as a Senate confirmation process has done nothing to educate people about the profound importance of the Court or how each nominee might change it.

It will be interesting to see if conservatives are hoist by their own petard during the upcoming confirmation hearings for President Obama's most recent nominee, Elena Kagan, who has apparently conducted her life as if it was a permanent dress rehearsal for a Supreme Court confirmation hearing. As numerous commentators have pointed out, Kagan has one of the thinnest paper trails of any nominee in recent history. Just 21 when Sandra Day O'Connor was nominated, Kagan has had a lifetime to contemplate the possible benefits of the Roberts warning to potential nominees, and to shape her career accordingly.

As enjoyable as it will be to watch Republican senators mouth platitudes about the importance of full and complete answers from a Supreme Court nominee (artfully forgetting their spirited defense of the evasive answers of recent conservative nominees), there is something intellectually antiseptic about Solicitor General Kagan's record. By all accounts a brilliant legal mind, her aloofness from contemporary legal debates has at the very least deprived us all of potentially insightful arguments, and at worst, has left her unprepared (at least initially) for the rigorous debate that ricochets off the Court's marble walls.

The decline of strenuous give-and-take during Senate confirmation hearings deprives the American people of classic teachable moments, those rare instances when the three branches of government come together to shape the future of the country. It would be a great and refreshing service to the nation and the Court for a nominee to answer frankly and honestly about how he or she would decide various types of cases. All of the usual caveats can and should be given -- every case turns on its specific facts, a nominee's opinions might shift over time or in response to one's colleagues on the Court, it is inappropriate to comment on litigation in which he or she was directly involved, etc. -- but the idea that each nominee is a blank slate upon which the litigants write is fallacious. Let us have a vigorous debate over the values and beliefs of each nominee, and hold them up to the admittedly imperfect lens of the Senate to see how they match those of the American public. Then, at least, we'd have a better idea of what we're getting into when a new set of robes is issued.

The importance of this debate has been increasingly underscored by the growing deviation of President George W. Bush's nominees, Chief Justice John Roberts and Associate Justice Samuel Alito, from their carefully-scripted and purposely banal confirmation answers. Over the course of several days of hearings, each repeatedly assured the Senate of their respect for the precedents of the Court and the underlying legal principle known as stare decisis. Then-Judge Roberts told senators that he would "have the humility to recognize that [judges] operate within a system of precedent."

Over the last five years, however, the conservative wing of the Roberts Court (joined increasingly by President Reagan's last appointment, Associate Justice Anthony Kennedy) has subtly and not-so-subtly launched an assault on numerous prior Court decisions, many issued by the Warren Court, that have long been in the cross-hairs of conservatives. No questioning after a request for counsel? Gone. Discrimination claims based on mixed motives for firing (some legal, some perhaps not)? Not any more. Bans on corporate involvement in campaigns? Surely you jest.

Particularly ironic, given Roberts's advice so long ago to O'Connor, was the Court's decision last week in the case of Berghuis, Warden v. Thompkins. Thompkins, a suspect in the drive-by shooting of another man in Michigan, was questioned for nearly three hours by police after being read his rights. Thompkins was given a form declaring that he understood his rights and expressly waived them, but he refused to sign it.

During the course of the questioning, Thompkins was mostly silent, but he did answer three questions that proved critical in his trial: Do you believe in God? "Yes" Do you pray to God? "Yes" Do you pray to God to ask for forgiveness for shooting that boy down? "Yes" His answers were introduced at trial and helped convict him of first-degree murder. The Sixth Circuit Court of Appeals overturned his conviction, but a 5-4 majority of the Supreme Court, led by Justice Kennedy, reversed that ruling.

No longer, Justice Kennedy said, would the police be required to affirmatively show that a suspect had waived his Miranda rights in order to introduce subsequent statements at trial. Instead, he said, "a suspect who has received and understood the Miranda warnings, and has not invoked his Miranda rights, waives the right to remain silent by making an uncoerced statement to the police." After more than 40 years of clear and well-established precedent and police procedure, the burden is now shifted to suspects -- often poorly-educated and inherently intimidated -- to affirmatively invoke a right that Justice Roberts and his conservative colleagues seem to believe should belong to judicial nominees alone.

The Court's decision is deeply troubling on a number of fronts. As Justice Sonya Sotomayor noted in her dissent, it continues the Roberts Court's blatant disregard of precedent and increases rather than decreases the uncertainty of criminal procedure.

"At best, the court today creates an unworkable and conflicting set of presumptions," Justice Sotomayor

said. "At worst, it overrules sub silentio an essential aspect of the protections Miranda has long provided."

The key phrase there, of course, is "sub silentio," or "under silence." Time and again, the conservative members of the Roberts Court have quietly ignored or undercut long-standing precedent, or have overreached the facts of a case to take on issues nettlesome to the right but not squarely before the Court.

Regardless of one's view of the Warren Court's often society-shaking decisions, there was absolutely no question about what was at issue before the Court, what the majority's reasoning was, or the intended significance of its rulings. In an overwhelming number of cases, the Warren Court chose to affirm the fundamental liberty interests of individuals vis-a-vis the government, a philosophy that should garner support from both ends of the political spectrum today. For instance, in 1966, when Chief Justice Earl Warren penned the now-weakened Miranda opinion, the Court clarified the boundaries of police-suspect interaction:

"If the individual indicates in any manner, at any time prior to or during questioning," Chief Justice Warren said, "that he wishes to remain silent, the interrogation must cease." [Emphasis supplied]

For the conservative majority of the Roberts Court, it is somehow not enough for a suspect to indicate his or her unwillingness to talk by simply remaining silent, as Thompkins did for the bulk of his interrogation. Instead, absent an unequivocal invocation of rights by a suspect, police are authorized to continue hectoring him or her in the hope that he or she might inadvertently say something incriminating. That's not police work, that's a police state, and it is frightening that five members of the Court are seemingly oblivious to the difference.

One reason, undoubtedly, that the majority prefers an oblique erosion of Miranda is that the vast majority of Americans -- thanks to television police shows -- know their Miranda warnings by heart, and would be appalled by an outright reversal of that decision. But who is going to tell Americans that they no longer have a right to actually remain silent? At best, Americans now have the right to say that they want to remain silent, which is a less clear and ultimately more tenuous freedom.

Left unchecked, the Roberts Court will usher in a "Silent Spring" for long-treasured constitutional liberties. It is always important to remember that one of our most complicated but treasured rights, the right of privacy, is not grounded in the text of the Constitution, but instead in the relationship between individual and government that is implicit in the Bill of Rights. If the myriad decisions that have shaped our modern understanding of our constitutional rights are quietly eroded by a Court whose Chief is the architect of judicial evasion and misdirection before the Senate, we may awake one day to what can only be described as an oppressive silence.

“You Have the Right to Remain Silent”

Today's post is from Frederick S. Lane, an author, attorney, expert witness, and lecturer who has appeared on "The Daily Show with Jon Stewart," CNN, NBC, ABC, CBS, the BBC, and MSNBC. His fifth book is American Privacy: The Four-Hundred-Year History of Our Most Contested Right.

"The approach," John Roberts said in a memo written in the summer of 1981, "was to avoid giving specific responses to any direct questions on legal issues likely to come before the Court." In effect, Roberts was advising O'Connor that she had the right to remain silent, because anything she said could and would be used against her. It is an approach that has been followed religiously by Supreme Court nominees ever since, including Roberts himself during his 2005 confirmation hearings to succeed the deceased Chief Justice William Rehnquist.

For conservatives, it is clear that silence has been golden.