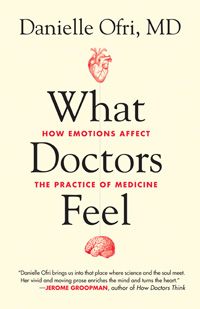 What Doctors Feel: How Emotions Affect the Practice of Medicine by Danielle Ofri

One of the NYTimes most emailed stories this week is from Danielle Ofri, MD:

I never told anyone about my lapse — not my intern, not my attending physician, certainly not the patient’s family. I tried to rationalize it: the radiologist had caught the bleeding, and no additional harm had come to the patient.

But what if I had discharged the patient? What if I had started her on a medication like aspirin that could have worsened the bleeding? My error could easily have led to a fatal outcome. The patient was simply lucky.

In hospital lingo, this was a “near miss.” But a near miss is still an error, just one in which backup systems, oversight or sheer luck prevent harm. [Read the rest here] 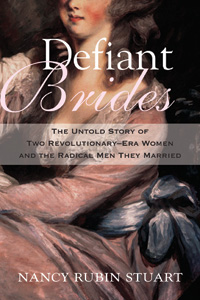 Defiant Brides: The Untold Story of Two Revolutionary-Era Women and the Radical Men They Married by Nancy Rubin Stuart

Barnes & Nobles’s book blog spoke with Nancy Rubin Stuart about the book and its jacket art:

“As I completed research and began writing the manuscript, I realized that there were several historical images of the treacherous Peggy Shippen Arnold but only one of Lucy Knox. Worst of all it was only a silhouette! Initially I thought the cover might depict the faces of those two women combined with several historical images of the American Revolution. Ruefully I mentioned my disappointment about the lack of portrait for Lucy Flucker Knox to my editor, Gayatri Patnaik, at Beacon Press, who assured me that we’d find a different solution. Bob Kosturko, the designer who created a stunning cover for The Muse of the Revolution, she explained, would be creating the cover for Defiant Brides.

“Gayatri was right. Some months later, Beacon Press sent me a draft of Bob’s cover design. I was thrilled. He had cleverly used the bottom half of a lavish portrait of Peggy Shippen Arnold but had eliminated her face. Simultaneously that solved the problem of Lucy’s missing face and hinted at the unpredictable course of the marriages that both teenagers embarked upon in the first flush of passion during the turbulence of the birth of the United States.” [Read the rest here]

Light Without Fire: The Making of America's First Muslim College by Scott Korb

Rollo Romig's wrote about the book and Zaytuna College on The New Yorker's book blog:

In his new book, “Light Without Fire,” the religion writer Scott Korb followed Zaytuna’s inaugural class of fifteen students through their first year, and his reporting reveals one of the most intriguing recent American experiments in providing a religious education. [Read the rest here]

Brokers of Deceit: How the U.S. Has Undermined Peace in the Middle East by Rashid Khalidi

Here Khalidi is not faulting the Israelis; they are a sovereign state acting in what they determine is their best interest, even if one views it as unjust, immoral, and at the expense of legitimate Palestinian rights. More importantly, Israel is only able to act with such impunity because they understand the power of the “no light” dogma. The U.S. accepts the perpetual “existential crisis” of Israel that makes the occupier the victim and gives them a free pass to act as they wish.

White Coat, Black Hat: Adventures on the Dark Side of Medicine by Carl Elliott

On CNN.com's Opinion Page, Carl Elliott examines how misdeeds are covered up in medical bureaucracies:

The problem is in how success is measured, which is not in the soft currency of ethics or trust, but in how much money the strategy saves for the institution. If it pays for everyone to keep quiet, that's what the bureaucrats will advise. [Read the rest here]

Mr. Hornaday’s War: How a Peculiar Victorian Zookeeper Waged a Lonely Crusade for Wildlife That Changed the World by Stefan Bechtel

Review of Mr. Hornaday's War in the Idaho Statesman

In "Mr. Hornaday's War: How a Peculiar Victorian Zookeeper Waged a Lonely Crusade for Wildlife that Changed the World," author Stefan Bechtel introduces us to a character seemingly filled with contradiction. Hornaday is fearless in his life's pursuits but overcome with fear at the rapid destruction of animal populations. He is a trophy hunter who travels to the far reaches of unsettled lands in Africa and India to take down a Bengal tiger or a wildebeest but carries guilt for the taking of 22 buffalo during his hunt out West. He is an avid hunter who is vehemently opposed to the new rapid-fire shotgun of his time because of its ability to strike so deftly. He is perpetually at odds with nearly every leader of his day but develops a unique kinship with Teddy Roosevelt that lasts a lifetime. [Read the rest here]

My Mother’s Wars by Lillian Faderman

The Gay & Lesbian Review full-page review in the May/June issue. Calling the book “a remarkable work of reconstruction” and noting its “voluminous list of resources,” the review concludes, “As usual, Faderman’s seemingly effortless prose is the result of years of patient research. As far as possible, she has made sure that the past will be accurately remembered.”

Dirt Work: An Education in the Woods by Christine Byl

Women’s Adventure Magazine online review: “While Byl does not romanticize nature or her work, she skillfully uses poetic language, daring the reader to feel the grit, grim, and sore muscles of working ten hour shifts digging, chopping, clearing, and creating trails…Dirt Work is highly recommended for readers who love the outdoors, and especially those who have hiked in a national park or forest, and benefited from the hard work of trail crews.”

Now on Sale: Parenting with an Accent