If you take the time to watch one TED Talk this week, make it this one. Geoffrey Canada is an educational innovator, and in this video (part of which appeared on PBS) he makes a powerful argument for changing the way we think about public education.

Canada knows how to help kids achieve great things: as the president of Harlem Children's Zone, he has changed countless lives and transformed a community. While the Harlem Children’s Zone started out focusing on a single block -- West 119th Street -- it has since expanded exponentially. It now encompasses more than 100 square blocks and serves an estimated 10,000 children, providing pre-kindergarten care, after-school programs, health care, college planning and classes for soon-to-be-parents.

Beacon Press is proud to be the publisher of Canada's two books: Fist Stick Knife Gun: A Personal History of Violence (which was also adapted into a graphic book) and Reaching Up For Manhood: Transforming the Lives of Boys in America. 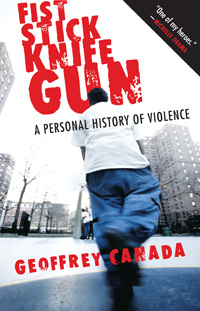 Long before the avalanche of praise for his work—from Oprah Winfrey, from President Bill Clinton, from President Barack Obama—long before he became known for his talk show appearances, Members Project spots, and documentaries like Waiting for Superman, Geoffrey Canada was a small boy growing up scared on the mean streets of the South Bronx. His childhood world was one where "sidewalk boys" learned the codes of the block and were ranked through the rituals of fist, stick, and knife. Then the streets changed, and the stakes got even higher. In his candid and riveting memoir, Canada relives a childhood in which violence stalked every street corner.

"I wish every city had a Geoffrey Canada."
—President Bill Clinton

"Geoffrey Canada's realistic yet hopeful voice finds fresh expression through the comic style of Jamar Nicholas. Canada's account of his childhood and the role that violence played in shaping his experiences provides hard-won and crucial lessons."
—Pedro A. Noguera, Peter L. Agnew Professor of Education at New York University

"Jamar Nicholas is a master of his craft—his drawings are full of life and truly stunning."
—Bryan Lee O'Malley, creator of Scott Pilgrim vs. The World

"Geoffrey Canada is one of this country's genuine heroes. His personal meditation on America's culture of violence is a beacon of hope for our humanity."
—Charles Johnson, author of Middle Passage

"Canada has never lost touch with the child within himself or with the fears of the children around him struggling to reach adulthood in the violent streets of America."
—Marian Wright Edelman, author of The Measure of Our Success

"Canada takes us on a powerful journey. . . . He is a man of hope and a wonderful storyteller."
—Henry Hampton, executive producer, Eyes on the Prize