Mission Not Accomplished: Homophobic violence a sign of the ongoing battle for safety and equality

Dr. Jay Michaelson is vice president of the Arcus Foundation and the author of five books and two hundred articles on religion, sexuality, ethics, and contemplative practice. His most recent book, God vs. Gay? The Religious Case for Equality, was a Lambda Literary Award finalist

Yesterday, Jay contributed to a discussion on Huffington Post Live about recent hate crimes directing against LGBT people. We've included the video below along with a companion piece originally posted on Huffington Post.

The murder of Mark Carson, targeted for being gay, is the third, and most serious, in a recent string of attacks against gay men in New York City. The horrific act, under investigation as a hate crime, has brought appropriate condemnations from all quarters.

But what it should not have brought is surprise. On the contrary -- Carson's murder highlights the shortcomings of a rights-based, marriage-based approach to LGBT equality, and cries out for deeper, and more difficult, forms of engagement.

With states falling like dominos into the marriage-equality camp, many have expressed shock that homophobic hatred and violence is "still" possible. But why is this shocking? The advent of civil rights for African Americans did not end racial violence, still widespread nearly 50 years after the Civil Rights Act. Feminism has not ended violence against women. Indeed, from Seneca Falls to Selma to Stonewall, to echo President Obama's historic turn of phrase, legal inequality is only the tip of the iceberg. Submerged beneath it are deep-seated patterns of injustice, privilege, prejudice and fear.

In an astonishingly short period of time, homophobia has gone from commonplace to contemptible. To take but one example, star athletes are today punished for saying a word - "faggot" -- that was one of the most common slurs of 'trash talk' just five years ago. Indeed, in coverage of Carson's murder, the word, like the 'n-word,' was referred to only euphemistically, as an "antigay slur." 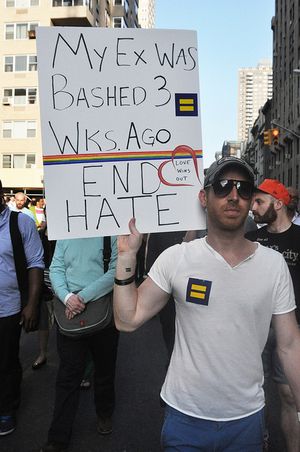 This change is welcome, but it is also so rapid as to induce whiplash. And banning language from polite speech does not remove it from consciousness. On the contrary: the tamping down of hatred only increases its intensity, leading to tragic bursts of rage.

So too the advances in same-sex marriage, the cultural acceptance of LGBT people, and other hard-earned markers of the normalization of sexual diversity. All of these are crucial signposts on the path to equality, and they did not come about overnight; they were, in fact, the culmination of decades of struggle. But none of them, nor all of them altogether, can uproot the roots of homophobia, which lie (among other places) within religion, culture and psychology.

In social struggles, legal equality is not the beginning of the end, but the end of the beginning. Yes, the state's imprimatur upon animus is now being, gradually, removed. But the animus itself remains. Carson's murder; the other acts of violence against LGBT people in New York; and, further from the camera's lights but more tragic and more prevalent, the spree of violence against transgender people -- particularly transgender women of color, some of the most vulnerable members of the LGBT community -- are not vestiges of bygone days we thought we'd left behind. Rather, they are a reminder that most of the work still lies ahead.

The work to come is different from what's come before. To be sure, legal inequality still persists in most states; in my home state of Florida, for example, I can be fired from a job simply for being gay, and my husband and I cannot adopt a child. But the real debates take place not in legislatures but in living rooms, locker rooms, and, yes, churches as well. For example, religious leaders cannot stand on the sidelines, or equivocate between 'sin' and 'sinner.' You're either opening hearts or closing them, fighting hatred or abetting it. Unfortunately, neutrality is not an option.

Nor is blissful ignorance. It's fun to live in "gay ghettos," or closed bubbles of like-minded friends. But these spaces are permeable. They are not as safe as they seem. And if we want to fight the causes of violence, LGBT folks and our allies need to venture out of them, and have more difficult conversations with those who aren't yet allies. This is more difficult than winning lawsuits; it takes time, and requires vulnerability, dialogue, and persistence. It is the responsibility of all of us, not just a few lobbyists and lawmakers. But personal relationships, personal stories, and personal experiences are the water that will erode the stone of the hardened heart. Nothing else will.

Nor can we imagine that because some of us are secure, all of us are secure. Progress has been uneven. It has not reached LGBT people in red states, in conservative religious families, in many communities of color, or in economically disadvantaged communities. It has not encompassed those whose gender presentation is different from the norm, or who do not "pass," or who are not "just like everyone else." These are people who live in constant threat of violence and marginalization, often intersecting with other forms of oppression.

Carson's murder reminds us that violence can strike anyone, anywhere. But it should also remind us that some people live with this fear every day.

Some privileged pundits have recently opined that the gay mission has been accomplished, that gay organizations should shut their doors, that victory may now be declared. To them, I suppose, Carson's murder is just an anomaly -- and those of more marginalized people, like Ce Ce Acoff, the most recent transgender woman of color victimized by hate, are simply invisible.

But this violence is neither anomalous nor invisible. It should not even be surprising. Rather, it is a reminder that hate doesn't disappear when discriminatory laws are taken off the books. For those of us who need reminding.