How Gotcha Politics in the Doctor's Office Can Harm Patient Care

Today's post is from Carole Joffe, author of Dispatches from the Abortion Wars: The Costs of Fanaticism to Doctors, Patients, and the Rest of Us. Joffe is a professor in the Bixby Center for Global Reproductive Health at the University of California, San Francisco (however, the views and opinions expressed here do not necessarily state or reflect those of the Regents of the University of California, UCSF, or the UCSF Medical Center). This post originally appeared at RHRealityCheck. 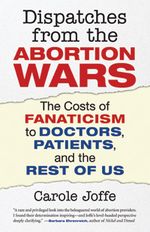 It does not take a rocket scientist to realize that in health-care settings a positive relationship between clinician and patient—one comprised of mutual understanding, respect, and trust—is beneficial to both parties. It is only common sense that when such a  relationship exists, however brief it may be, the provider develops more sympathy for the needs of the patient, and the latter’s overall well-being can improve if she or he senses personal interest and concern on the part of the former.

Arguably, this point is especially relevant in abortion care because of the extreme politicization and stigma that surrounds the procedure. Some patients, having been exposed to anti-abortion distortions, are terrified of the procedure (one provider told me of a patient who asked, “When are you going to use the steel ball with the knives on it?”) and some do not view abortion doctors as “real” doctors. Some physicians, in turn, depending on the circumstances of their particular facility, have little chance to interact with patients, except when she is on the procedure table, possibly under anesthesia. Therefore, these providers may have an inadequate understanding of the reasons that brought these women to the clinic. Indeed, several research studies of abortion staff done soon after abortion became legal in the United States have shown that those who had opportunities for verbal interaction with patients—for example, social workers and counselors—were more positively inclined toward patients than those whose interactions were confined to just physical care. My own research among abortion providing physicians has revealed that the aspect of this work many find most meaningful is simply talking to patients, and some are wistful that there is not more opportunity for this.

In the period immediately after Roe v. Wade, it was very common in most abortion settings for designated counselors or physicians to have the opportunity for open-ended discussion with a patient. This kind of encounter, which goes beyond offering the patient the requisite informed consent information and ascertaining she has not been coerced into the decision, has been difficult for many facilities to sustain over the years for various reasons, not the least being that in many states patient-doctor time is eaten up by doctors having to impart to patients legislatively mandated scripts about abortion, many of which contain blatant falsehoods. Nevertheless, most abortion facilities with which I am familiar make every effort to offer additional conversational time to patients who seem most in need of it.

What do these efforts to maintain meaningful provider-patient conversations have to do with Live Action, the anti-abortion group notorious for its undercover “investigations” of abortion clinics? For several years, Live Action operatives, pretending to be prospective abortion patients, have gone into clinics, questioning various levels of staff about abortion policies and procedures, and when their hidden cameras manage to catch a staff person making an inopportune comment, the organization triumphantly posts videos (typically highly edited) of these visits.

The latest Live Action “gotcha” moment is in a video of Dr. Leroy Carhart, one of the few providers in the United States who openly provides post-24-week abortions in selected circumstances, and as such is a longstanding target of the anti-abortion movement. In the video, Carhart is repeatedly grilled by a would-be patient, who portrays herself as 26 weeks pregnant, as to the procedure he would use in a pregnancy of that gestation. In response to the woman’s stated concern that a fetus whose demise has been caused by injection “would decay inside of her,” Carhart seeks to reassure her, at one point saying the fetus would soften like “meat in a Crock-Pot.” Predictably, Live Action, and subsequently other anti-abortion groups, have seized upon this statement and used it to further their campaign of what might be called the “Gosnellization” of individuals who provide later abortions—that is, to claim that Carhart and his colleagues are no different than the rogue doctor now on trial in Philadelphia for dangerous and illegal practices.

But Leroy Carhart and Kermit Gosnell could not be more different as abortion providers. As the New York Times pointed out in its coverage of this incident, “[T]he video provides no evidence of illegal action or subpar medical techniques.” Tracy Weitz, my University of California, San Francisco colleague, further pointed out to the paper the evident concern that Carhart exhibited toward the (imposter) patient, and offered this context to his “Crock-Pot” remark: “Doctors struggle to find terminology to help a client understand what’s happening, and while it may seem wrong to us, it may be appropriate for that conversation.” (The recent film After Tiller also amply demonstrates Dr. Carhart’s compassionate relationship with patients.)

What will be the upshot of this latest Live Action incident? Dr. Carhart, who previously provided later abortions in the clinic of Dr. George Tiller in Kansas before Tiller was assassinated, will not be deterred from his “mission” to carry on his friend’s work, as the former military surgeon often puts it. In the years since he decided to devote himself full-time to abortion work, Carhart has had extremists burn down his barn with 17 horses inside, seen the state of Nebraska pass a law deliberately aimed at preventing him from performing abortions after 20 weeks’ gestation, and is subject to constant protestors at his two clinics as well as vilification in anti-abortion media.

But while Dr. Carhart will continue with his work, I do fear that a possible consequence of these well-publicized Live Action videos may be a chilling effect on the free and open conversation between clinic staff and patients that is such an important part of abortion care. Should this occur, I have no doubt the anti-abortion movement will declaim self-righteously about the “coldness” and “impersonality” of abortion facilities.

Posted at 11:22 AM in Carole Joffe, Dispatches from the Abortion Wars, Feminism, Gender, and Sexuality, Public Health, Medicine, and Science | Permalink