Moms in Writing: Chris Stedman and Kevin Jennings on their Moms

In honor of Mother's Day and moms everywhere, where sharing a few of our favorite Mom moments in Beacon books. Today's passages illustrate two beautiful gifts the authors received from their moms: for Kevin Jennings, a love of books; for Chris Stedman, a sense of gratitude. Please feel free to share your own mom memories in the comments! 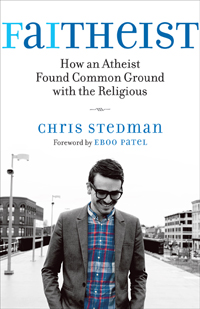 Chris Stedman from Faitheist: How an Atheist Found Common Ground with the Religious

My childhood was marked by simplicity and hard work and love—which is to say that it was actually quite carefree. My mother did a good job of instilling in us a deep sense of gratitude for the things we had; I didn’t really notice that we had less than other people until I was older and began to look for differences everywhere. It never seemed odd to me that we wore hand-me-down and home-spun clothing, or that we used homemade remedies like covering our hair with mayonnaise and saran wrap when we got lice from someone at school. When we were young children my mom made sure my siblings and I were well cared for—it was only later in life that I started telling myself that my story was that of “the poor kid.” The life she provided was rich, filled with complex colors of every hue, with trips to the beach in the early hours of the day before the parks became overcrowded with people desperate to escape the summer swelter, with arts and crafts and makeshift blanket forts.

Her inventiveness masked the meagerness we lived with; I never even realized until later in life that during my youngest years she had only owned two pairs of jeans and a few sweatshirts. She had an unparalleled aptitude for spinning straw into gold—our Christmases were full of hand-crafted and recycled gifts, and for birthdays she would set up elaborate party games, hanging pretzels from the ceiling with ribbon, hand-painting a bunny for cotton ball pin-the-tail-on-the-rabbit, and writing up thought-provoking trivia. My earliest years were characterized by imaginative games my siblings and I invented such as “Mean Diseased Cat,” where we manned our alert stations in anticipation of the return of a particularly feral cat that once meandered down our street; by the birthday cakes my mom painstakingly prepared; by the hand-crafted skip-its, teeter-totters, and pajamas that were our most prized possessions; by sitting down together as a family for dinner every single night, even if it was just bottom-shelf macaroni and cheese or saltine crackers topped with melted Kraft Singles, which we ate near the end of particularly tight months. I didn’t realize that you could buy Play-Doh at the store until I was nearly in middle school; we always made ours from scratch. I think we enjoyed it more that way, having concocted it ourselves before using it to build new things. We were deeply invested in everything we did, because most things were an act of creation and an act of love. 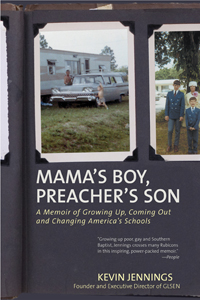 Kevin Jennings from Mama's Boy, Preacher's Son: A Memoir of Growing Up, Coming Out, and Changing America's Schools

Above all, she taught me to love books and reading. Mom was a voracious reader, a trait she passed down to me. The highlight of our week would be our Saturday trips to the downtown public library in Winston-Salem—the “big one” and just about the only site that would get Mom regularly to venture out of the safety of Lewisville into “the city.” It was always just me and her, as the only thing that bored Paul more than Civil War battlefields was a library. I loved the downtown library. It was beyond a church—it was a cathedral, filled with holy objects, books, so many that I despaired that I would ever be able to read them all. The librarians were friendly and thought it was great, not weird, that I liked to read so much. I would check out as many books as I could carry, usually a stack so large I couldn’t see over them, and would devour them all during the course of the week, returning the next Saturday, eager for more. Library trips were the best. They even beat new trailer shopping.

At first I would go to the children’s section and Mom to the adult section. By fourth grade or so, I had read all the books that interested me in the children’s section and decided that the rest were too childish for this budding intellectual snob to bother with. I told Mom that I wanted to go where she went, the adult section. This created a crisis for Mom: in the adult section, there was a replica of the Venus de Milo. Mom felt it was inappropriate to have a nude statue in a public place, period, and especially inappropriate for a young boy to see it. (If she only knew...) I begged and pleaded and finally she relented, but only if I first promised not to look at the statue of the “naked lady.” Ignoring the naked lady, I raced in and returned with a forehead-high stack. I was in heaven.