Today's post is part of a series of interviews with Michael Bronski about the A Queer History of the United States, the 2012 Lambda Literary Award winner for LGBT Nonfiction. The interviews were conducted by Richard Voos.

Invisible to the rest, henceforth become my companions;
Follow me ever! desert me not, while I live.

Sweet are the blooming cheeks of the living! sweet are the musical voices sounding!
But sweet, ah sweet, are the dead, with their silent eyes.

Dearest comrades! all now is over;
But love is not over—and what love, O comrades!
Perfume from battle-fields rising—up from fœtor arising.

The Army Hospital Feb 21, 1863. There is enough to repel, but one soon becomes powerfully attracted also.

Janus Mayfield, (bed 59, Ward 6 Camp[bell] Hosp.) About 18 years old, 7th Virginia Vol. Has three brothers also in the Union Army. Illiterate, but cute—can neither read nor write. Has been very sick and low, but now recovering. Have visited him regularly for two weeks, given him money, fruit, candy etc.

Albion F. Hubbard—Ward C bed 7 Co F 1st Mass Cavalry/ been in the service one year—has had two carbuncles one on arm, one on ankle, healing at present yet great holes left, stuffed with rags—worked on a farm 8 years before enlisting—wrote letter—for him to the man he lived with/ died June 20th 1863 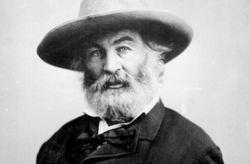 Richard Voos: In American history the Civil War forms a turning point in American history however one defines it, in terms of the sheer number of Americans dead on both sides as well as the transformation of the United States into a modern industrial nation. It also has a transformative effect on the role of men, the sheer violence on the role of men, as well as the ability of women to perform in a different role.

Michael Bronski: That's totally correct. When we look at the Civil War—and the Civil Ward plays such an important role in the mythology of American history—it really is central. But I think people don't understand the role of violence in the Civil War. We all know that all war is violent, but the sheer number of deaths of American men in the Civil War is tremendous. If we were to do a percentage, based on our current population, of the Civil War versus today and the number of deaths, the number of deaths given today's population would be six million deaths. Which is staggering when you think about it. So what the Civil War does within the history of American gender is something quite unique. If after the Revolution we saw the making of the new American man, the divorcing of the Daniel Boone/Davy Crockett type from the effete fop from England, that trend continued and the Civil War presents us with a complete crisis of masculinity. In the two Whitman quotes we heard, we actually see this sort deluge of mutilation and death and harm to the male body happening, and at the same time we see this enormous amount of tenderness towards the male body. Because well, everybody, North and South, who fought in the Civil War was brave, even if they were brave for those 35 seconds before they were shot coming into the first big battle if they were in the first wave of people.

And let’s not forget that the Civil War deaths were fairly personal: you actually shot people or you bayonetted them and they were right in front of you. You did not get to be in a tank and shoot people who were 50, 150 yards away from you. The sheer amount of death was devastating to the men who fought in the Civil War, and who survived. So when we hear the Walt Whitman poems, it’s just this endless elegy to male beauty, to male sentiment, to the uniqueness of men—and quite sexualized, often, within Whitman's poetry and in his journals. On the other hand we have… not the image of the brave Union soldier or brave “Johnny Reb,” but in fact the young vulnerable boy who has simply been torn apart. So the male body becomes here, and we see this later in World War II, which we'll discuss in a later podcast, we see the male body completely heroicized and lionized for being brave, and at the same time pitiable in its vulnerability.

RV: How does the violence associated with the Civil War continue to influence the definition of manliness after the war?

MB: Having just spoken about the dichotomy between the brave soldier and the vulnerable soldier, I think one thing to keep in mind here—and it continues to be a central part of American culture today, but particularly up until World War II—is that we see the very definition of manhood changing. So the rite of passage for men from the age of 13, 14 up until 50 in the Civil War, the rite of passage was actually killing someone. Killing another soldier, killing another American, even if they had seceded from the Union. So, the very definition of manhood—quite different from Davy Crockett, if Davy Crockett proved his manhood by killing animals—the definition during the Civil War was actually to kill another American.