We're reaching the end of commencement address season, so as our supply of hopeful, funny, and inspirational speeches dwindles (some faves this year: Stephen Colbert, Arianna Huffington, Gabby Giffords, and John Green), we wanted to be sure to share this one with you.

It's not a surprise that our favorite this year is from Eboo Patel, speaking at Elizabethtown College. What's not to love? Eboo is a visionary and a engaging writer (see Acts of Faith and Sacred Ground for confirmation), and here he's praising the intro to James Baldwin's Notes of a Native Son, another book that we are tremendously proud to have published.

But our appreciation of the speech goes beyond the mere pride that a Beacon author was moved to write about a classic Beacon book. Eboo illuminates the revelations and anxieties in Baldwin's text—the feeling of being driven to write, the conflicts inherent in being present in a dominant culture that attempts to exclude you and your experiences, feeling both pride and discomfort in identity—and he shares how that piece of writing helped shape his own growth as a young activist and author. In short, it made us pause and think about all the reasons we love bringing books to readers. Enjoy! 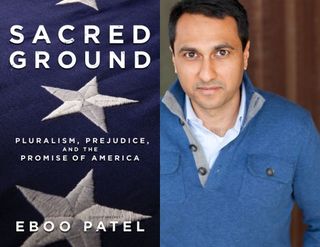 In every phase of my life, there have been texts that have lit the path. When I was a kid, and sports were king in the schoolyard, the Great Brain books taught me that being smart had its uses. In high school, John Steinbeck’s Cannery Row, Ken Kessey’s One Flew Over the Cuckoo’s Nest and the Grateful Dead’s From the Mars Hotel showed me that the American tradition had a rebel streak. In college, my world was rocked by Tony Kushner’s Angels in America, essays by bell hooks, Paolo Freire’s Pedagogy of the Oppressed and ani difranco’s Not a Pretty Girl – works that taught me a thing or two about power and identity.

After graduation, when I was asking myself who I wanted to be and what impact I hoped to have, the work I found myself returning to over and over again, the piece that served as both my prod and my guide, was the opening six pages of James Baldwin’s 1955 essay collection, Notes of a Native Son. Those six pages, titled Autobiographical Notes, are an account of how James Baldwin carved out his commitments and understood their consequences.

I love the piece for its fury, for its stark take on the world as it is, for its ability to confront contradiction without resolving it. It reminded me of the first two Led Zeppelin albums: the energy of the music so powerful you can feel it literally burst through the skin of the studio production.

The first lines: “I was born in Harlem thirty-one years ago. I began plotting novels at about the time I learned how to read … In those days my mother was given to the exasperating and mysterious habit of having babies. I took them over with one hand and held a book with the other …”

Listen closely to those sentences. Baldwin is articulating how he first heard the call of his vocation, how he first felt within himself the beating heart of a writer. It did not happen on a fancy trip to Europe. It did not happen in the middle of an advanced course in graduate school. It happened in the living room of an overfull Harlem apartment, surrounded by squalling babies.

The ability to listen to yourself, to tease out the signal from the noise in a world that is a crashing, clanging cacophony, that’s a treasure that is worth more than any amount of silver or gold.

Autobiographical Notes was written in response to a request by Baldwin’s fiction publisher to fill out a standardized form for their records - date of birth, city of residence, etc. The very idea of the form pissed Baldwin off, so he turned it around and started writing on the back. It became the essay that I’m quoting from today. Makes me look at every boring form I’m handed and wonder how to turn it into a lasting work of art. Also, it confirms my suspicion that an awful lot of creativity is at least partially a result of the chip certain people carry on their shoulder. I know that chip well. So did Baldwin.

He says: “Any writer … feels that the world into which he was born is nothing less than a conspiracy against the cultivation of his talent - which attitude certainly has a good deal of evidence to support it. On the other hand, it is only because the world looks on his talent with such a frightening indifference that the artist is compelled to make his talent important … the things which hurt (you) and the things which help (you) cannot be divorced from each other.”

One of my biggest surprises when I graduated from college was just how indifferent the world was to me. I suspect I was like many of you here: front row in all my classes, eager beaver in every possible extra-curricular. College is an environment that nurtures those qualities, and rewards them. The rest of the world, not so much. I literally remember thinking to myself a few months after I graduated, ‘Where are all the people telling me how great my new idea is, congratulating me for committing to read this classic novel, encouraging me as I begin a new writing project.’

That’s when I was truly grateful for the faculty and staff who nurtured me through my liberal arts education. The gift they gave me was helping develop those capacities and values in the first place, supporting me as I flexed those muscles. My gift to them would be to continue growing those muscles without them by my side.

Baldwin’s essay helped me realize that I had entered a new stage, a stage defined not so much by encouragement but by struggle. Nobody was sitting in their office waiting for me to walk in so they could give me money for my new organization or extra credit for my new intellectual endeavor. The world was not going to convince me that I had something worthwhile to offer. I was going to have to convince it. This meant I first had to convince myself.  And that is not just a question of capacity, it is also a question of identity.

Identity is at the heart of Baldwin’s work. He once told his friend and editor Sol Stein that he was born with three strikes against him: he was black, he was gay and he was ugly. The third could be disputed, but the first two were definitely true.

Baldwin is blunt about “the tremendous demands and very real dangers of (his) social situation”. He writes of how being black in America made him “hate and fear the world”, putting him in a “self-destroying limbo.” So how does he navigate forward? By adopting a different lens looking back.

Some of the most powerful lines in the essay are when Baldwin cites the great masters and creations of Western civilization – Shakespeare, Rembrandt, Bach, the Empire State Building. He points out that these masters are not really part of his heritage. Some of the people would have happily enslaved him, yet he is drawn to their ideas and creations nonetheless. So what is he to do?

On my first day as a graduate student at Oxford, some fancy-pants university official found out I was an American and said, “Oh, how wonderful. Do you know Bill Clinton? Such a charming man.” I thought to myself, ‘Sorry, you got the wrong guy. My parents own Subway Sandwich Shops in the Western Suburbs of Chicago. Biggest thing I’ve ever done is shake Michael Jordan’s hand in the parking lot of the golf course near my house.’

Everything about that situation screamed to me, ‘You don’t belong here.’ I must say, the exit sign looked pretty alluring sometimes.

Instead of walking, I took out my Baldwin and re-read that essay. I realized the tradition would take no note of me slinking away, nor was it about to magically throw open its doors and let me in. It was my responsibility to shape a special attitude to it, to knock on its doors, to make my contributions, to not simply cry foul but to effect change.

A crucial dimension of a liberal arts education is a long look back, a listening in on the great conversations that have threaded through past centuries. But simply being conversant in what others have said is not the same as being educated, not at least in the Elizabethtown way.

Asking the question: what is my special attitude to those things that have gone in the past? Even those dimensions that might have turned their back on people like me? How might I learn from them, love them, embrace the parts that are humanizing, change the parts that hurt and marginalize, make them my own? How can you stand at the crossroads of inheritance and discovery and look both ways at once?

I love Autobiographical Notes for how it spoke to me at 22, I love it for its jazz and war. As I stand here this morning, I am fifteen years past the days when I re-read Autobiographical Notes night after night, seeking new insights into my personal drama. Going back to it now helps me remember the intensity of that time in my life. Make no mistake, I envy you the stage you are about to enter.

The final lines of the essay are different. For all the passion of the previous pages, the searing talk of racism and America and special attitudes, Baldwin doesn’t end the essay by making huge demands or issuing earth-shattering proclamations. He ends with lines that are both simple and modest, lines that sound almost like a prayer, lines that I believe honor a graduating class of a school devoted to service and to others.

He wants to be an honest man and a good writer. He wants to last, and get his work done.

Read a selection from Sacred Ground by Eboo Patel

Posted at 09:20 AM in Acts of Faith, American Society, Eboo Patel, James Baldwin, Notes of a Native Son, Race and Ethnicity in America, Sacred Ground | Permalink