Home About Beacon Press
Last week for 25% off all LGBT Titles at Beacon.org. Order Now!
What is Marriage For? And Who Defines What It Is?

The DOMA Ruling and Children

Carlos A. Ball is Professor of Law and Judge Frederick Lacey Scholar at Rutgers University, Newark. He is the author of The Right to Be Parents: LGBT Families and the Transformation of Parenthood (NYU Press, 2012), From the Closet to the Courtroom (Beacon Press) and The Morality of Gay Rights (Routledge).

During the month of June, From the Closet to the Courtroom and all other Beacon Press LGBT titles are 25% off at Beacon.org. Use the code PRIDE at checkout before June 30, 2013, to receive your discount. Read more at beacon.org/queervoices. 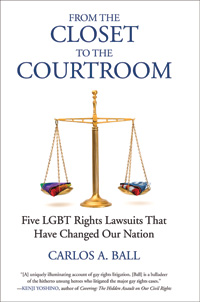 There are many striking aspects to the Supreme Court's DOMA ruling, but perhaps the most compelling is the role that children and their well-being played in the court's reasoning. For the last twenty years, same-sex marriage opponents have claimed that marriage must remain an exclusively heterosexual institution in part because doing so purportedly promotes the welfare of children. Opponents have contended that children do best when raised by their biological mothers and fathers and that society has an interest in promoting heterosexual marriages because they are the "optimal" way of raising children.

Unfortunately for opponents of gay marriage, there is a wide consensus among developmental psychologists and other experts that children are not harmed in any way by having lesbian or gay parents. But even putting that issue aside, it is deeply ironic that defenders of "traditional" marriage, in purporting to promote the best interests of children, have consistently ignored the needs of the tens of thousands of children who are being raised by lesbians and gay men.

This was an issue that Justice Anthony Kennedy raised during the oral argument in the Proposition 8 case last March. Kennedy asked the lawyer defending California's same-sex marriage ban whether it was not the case that the children of same-sex couples were harmed when the state prohibited their parents from marrying. The attorney responded by claiming essentially that whatever harm might exist was a constitutionally permissible price to pay for promoting "traditional marriage."

Justice Kennedy, in writing the majority opinion in the DOMA case, clearly disagreed. Kennedy emphasized that when the federal government treats state-sanctioned same-sex marriages as "second-tier marriages," it humiliates and stigmatizes the children of those marriages. DOMA, Kennedy explained, made it "difficult for children to understand the integrity and closeness of their own family and its concord with other families in their community and their daily lives."

Kennedy also emphasized the financial harm that DOMA caused the children of same-sex marriage. He noted, for example, that DOMA made paying for health care more expensive for families because it required the federal government to tax the health benefits provided by employers to their workers' same-sex spouses. DOMA also denied Social Security benefits to a surviving same-sex spouse to care for the couple's child.

The Supreme Court's opinion in the DOMA case illustrates how it is the marriage equality side that truly has had the best interests of children at heart all along. No child of a heterosexual couple is harmed in any way when the government recognizes same-sex marriages. In stark contrast, when the government refuses to recognize same-sex unions as marital, it harms the children of lesbians and gay men in tangible ways. The Supreme Court understood this, and that is one of the most compelling reasons why it struck down the federal government's unequal treatment of married same-sex couples.

Posted at 03:50 PM in American Society, Carlos Ball, From the Closet to the Courtroom, Queer Perspectives, Race and Ethnicity in America | Permalink