Home About Beacon Press
Paul "Pole Cat" Moore in the Ring, at the Rat, and Dealing Coke for Whitey Bulger
Stigma on Steroids: Kansas Bans Abortion Providers from Schools

Argle-Bargle: What Justice Scalia Still Doesn't Get About Marriage

Dr. Jay Michaelson is vice president of the Arcus Foundation and the author of five books and two hundred articles on religion, sexuality, ethics, and contemplative practice. His most recent book, God vs. Gay? The Religious Case for Equality, was a Lambda Literary Award finalist. 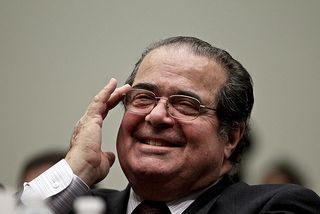 The "Scalia Dissent" has been a particular subgenre of legal discourse for two decades now, amply studied in the academic and popular literature. Vitriolic, hyperbolic, littered with witty bon mots and invective against faulty reasoning (i.e. any reasoning with which Justice Scalia does not agree), it is something one now comes to expect in any high-profile Supreme Court case decided in a more liberal direction.

But Justice Scalia's dissent in U.S. v. Windsor, the Defense of Marriage Act case, feels different. Scalia pulled out the same rhetorical flourishes as ever, but he seems remarkably oblivious to context: the lives of millions of Americans. Windsor was not another case about crèches in the public square (the occasion of some of the earliest Scalia rants) or obscure administrative procedures. It was the case that decided the fates of tens of thousands of families, and, more broadly, established that discrimination on the basis of sexual orientation is wrong, regardless of one's personal views on the subject. Agree or disagree that same-sex families are marriages or not -- they certainly are families, and certainly are made up of human beings. Justice Scalia's contemptuous dissent is contemptuous of these millions of Americans' humanity.

The majority's opinion in Windsor was clear enough, and exactly what most legal experts had expected. After dispensing with the issue of standing, the majority noted that marriage is a matter of state, not federal, regulation. Thus a couple married in New York is duly married, whether same-sex or opposite-sex. To discriminate against a married couple requires a secular interest which was lacking in the Defense of Marriage Act -- on the contrary, the legislative record showed evidence of bias. Thus, such discrimination violates the Constitution's guarantee of equal protection of the laws.

This reasoning is what Justice Scalia termed "legalistic argle-bargle."

Really? Argle-bargle? The term doesn't appear in my dictionary, but I take it to mean an incoherent ramble, the equivalent of gibberish. And to apply it to the legal arguments that a generation of lawyers and legal scholars have debated for years is, itself, offensive. It is offensive to those lawyers, of course, but even more so to people like Edie Windsor, the 84-year-old plaintiff in the case, suing to not be penalized that her legal spouse was a woman and not a man. It is offensive to my friend who can now apply for a Green Card, finally, after living apart from his husband for a year. Context matters, a Scalia Rant in this context is deeply offensive.

Of course, no one expected Justice Scalia to strike down DOMA. Yet ironically, the reason we all knew this is that, over the years, Justice Scalia has shown himself to be a duplicitous legal reasoner when his legal ideology meets his political or religious ones. That is, he argle-bargles. For example, for years Scalia waved the banner of state's rights -- until Bush v. Gore, in which he suddenly voted to overturn a state supreme court's interpretation of its own constitution. Indeed, just one day before Scalia's impassioned defense of deference to Congress in Windsor, he voted to overrule Congress in Shelby County, the Voting Rights Act case. So what is the principle here? We defer to Congress when it discriminates, but not when it bars discrimination? Is there a principle? Or is there, rather, just argle-bargle? 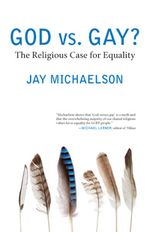 Ironically, this clear contempt for and ignorance of LGBT lives is precisely the sort of animus Justice Scalia says we should not impute to DOMA's backers. In the same words with which he complains of being called a bigot, he writes like a bigot.

The ignorance of the lives of gay and lesbian people is not unique to Justice Scalia, of course. Others, too, cover up their ears when they hear about lesbian ministers, or gay boy scouts. No, they insist, there are no gay people -- only gay acts, only sodomy, only a "lifestyle."

But this is ignorance of the facts. The facts are that gay people exist, that many (though not all) say they were 'born that way,' that same-sex families are families. And while such ignorance may be expected among the extremist rabble, it ought to have no place in the Supreme Court.

Indeed, even if Justice Scalia still denies the humanity of gay people, one might've hoped that he would have recognized the gravity of the moment and of his role as a Supreme Court justice, and held back from ranting, just this once. But instead, by demeaning the people whose lives were at stake, by dismissing with an invented slur the articulation of their hopes and aspirations, their very sense of what it means to be an American, Justice Scalia has demeaned the institution he is meant to serve.

As for the LGBT community, we will not be brought down to his low state. At a rally in New York's Tompkins Square Park, a beloved artist and performer named Donald Gallagher -- a man who was present at Stonewall, who recently lost his partner of 40 years to cancer, and who once laboriously painted the entire ceiling of his church in Jersey City -- proclaimed that, in the secret language of the ancient gay elders, "Argle Bargle" really means "Joy to All." Argle Bargle! the crowd shouted. Argle Bargle!