﻿Susie Bright, in addition to being a best-selling author, activist, and podcast host, is editor at large for Audible. Susie's blog, The Bright List, keeps readers and listeners apprised of new audiobooks. 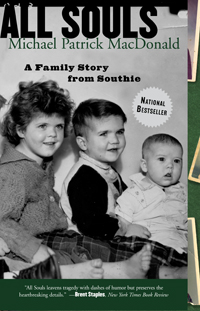 All Souls: A Family Story from Southie by Michael Patrick MacDonald

"An incendiary, moving book that startles on nearly every page . . .

"MacDonald's nimble prose and detailed recall of grim times long past make for luminous reading; his hard-won conception of how ghettoized poverty spawns localized violence, and the dignity he brings to lives snuffed out in chaos, gives All Souls a moral urgency usually lacking in current memoir or crime prose.

Michael Patrick MacDonald grew up believing his mother and the politicians who said Boston's Southie neighborhood was the “best place in the world.”

But the tight-knit, community was also insular and hostile to outsiders. Violence on the street was ignored even as it affected nearly every family there. Politicians like William "Billy" Bulger and gangsters like Whitey Bulger cooperated to keep crime and punishment in the neighborhood and out of sight.

This insider’s tale is revelatory and heartbreaking. MacDonald's writing: evocative and sharp. It’s easy to see why, even as he describes the murders and overdoses of friends and family, he loves  his neighborhood.

Rather than join in the cycle of violence all around him, Michael Patrick MacDonald used his sorrow and his outrage as an anti-violence activist helping to start a gun buyback program and the South Boston Vigil Group which helped the community acknowledge and bring to light the violence around them.

Winner of the American Book Award.

Narrated by the author.

Posted at 12:57 PM in All Souls, Biography and Memoir, Michael Patrick MacDonald | Permalink