Home About Beacon Press
Reflect on the Civil Rights Movement with the Essential Writings of Martin Luther King, Jr.
Teachers Guides from Beacon Can Help You Get Back to School

Beacon Books at Audible: My Mother's Wars by Lillian Faderman

﻿Susie Bright, in addition to being a best-selling author, activist, and podcast host, is editor at large for Audible. Susie's blog, The Bright List, keeps readers and listeners apprised of new audiobooks. 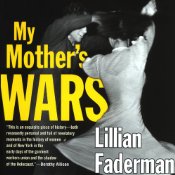 My Mother’s Wars by Lillian Faderman

"Lillian Faderman is an extraordinary storyteller, one of the few who can tell a painful story, with a complex ending—and imbue it with humor, sensuality and earthy grace, in every sentence."—Amy Bloom, author of Away

Lillian Faderman’s mother was an immigrant, a garment worker, a woman in love with a man who would never marry her, a single mother, and a jew desperately trying to bring her family to America during the Holocaust.

Regret infused her life and Faderman swore she’d never live a life like her mother’s, but as she writes in the introduction, “though I’d known all her secrets, I hadn’t known her.”

Faderman wrote this book to try to understand her mother. It's a tale of making it on one’s own in a time when an unmarried mother was a pariah, and an examination of forgiving one’s family the turns they made.

My Mother's Wars has the sweep of early twentieth century history, but unlike most books and biographies about the period, there is no triumphant overcoming of hardship, only a puzzled making do. The story of a real life.

Narrated by Suzanne Toren who narrated the excellent Team of Rivals: The Political Genius of Abraham Lincoln.

Posted at 12:50 PM in Biography and Memoir, Lillian Faderman, My Mother's Wars | Permalink