Voices from the 1963 March on Washington for Jobs and Freedom

The March on Washington for Jobs and Freedom, best known for Martin Luther King, Jr.'s iconic "I Have a Dream Speech," took place on August 28, 1963. On that day, over a quarter-million people rallied in the first-ever nationally televised demonstration. The March brought together all factions of the civil rights movement at a time of growing tension. In the weeks after the pivotal Birmingham campaign, some 2,000 demonstrations took place across the country. Not only did the movement attack the southern bastions of segregation, it also moved north to New York, Philadelphia, Chicago, and other cities. Coming just two months after President John F. Kennedy’s landmark address and legislation on civil rights, the March gave America its first comprehensive view of the movement.

In honor of the Great Day, we're sharing some intimate glimpses of the March—from civil rights activists and leaders to ordinary citizens who helped shape the greatest civil rights demonstration ever.

“They came every way—flatbed trucks with the wood floor that they used to carry tobacco, pickup trucks that were all dinged up, charter buses, school buses, station wagons, cars, motorcycles, bicycles, tricycles, and I could see people still coming in groups… Children of every size, pregnant women, elderly people who seemed tired but happy to be there, clothing that made me know that they struggled to make it day to day, made me know they worked on farms or offices or even nearby for the government.” —Erica Jenkins, a fifteen-year-old who attended the March on Washington.

“When I was the rabbi of the Jewish community in Berlin under the Hitler regime, I learned many things. The most important thing that I learned under those tragic circumstances was that bigotry and hatred are not the most urgent problem. The most urgent problem is silence.” —Joachim Prinz, civil rights activist, rabbi Jewish rights leader, during his speech at the March

“I think the country misses a lot when a person of your caliber isn’t exposed to the real trouble—the real problem.… If you got slapped in the face it would be noticed. It would give us faith.” —Jerome Smith, a marcher from the Mississippi Delta, in conversation with actor Paul Newman 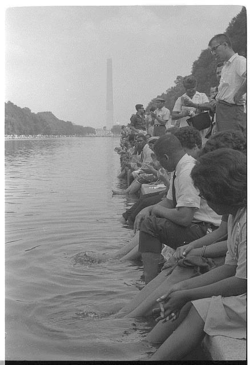 Demonstrators cool off at the Reflecting Pool during the 1963 March on Washington. (Photo: National Archives)

“Without music, you don’t have anything. We were used to singing and getting everyone to join in. You can talk for only so long, but you need to sing or march to get people involved.” —Dorie Ladner, civil rights activist and leader

“I was surprised to be told that the FBI [sent agent provocateurs to try to instigate fights during the March] because I still had this idea of what the FBI was supposed to represent. On the Freedom Rides, we knew the FBI was there, but they were just there to observe, and whenever they saw violence they did nothing.… But to be told they would start something, that’s something else.”—Julius Hobson, a civil rights activist and FBI informant who reported on violence-prone groups

“Nobody can speak for us but us. How can we be marching for freedom and jobs and not have a woman speak?” —Dorothy Height, a civil rights and women’s rights activist, in conversation with Bayard Rustin, the deputy director of the March, regarding the lack of women speakers at the March 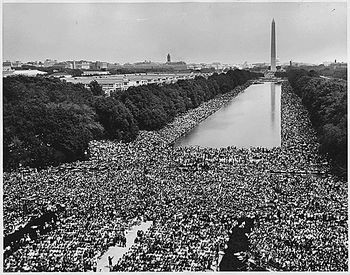 Aerial view of demonstrators on the National Mall during the 1963 March on Washington. (Photo: National Archives)

“I simply don’t know how they’re going to do it. We spend nearly a year planning for the inaugural parade. They’re trying to pull off something much more complicated in weeks.” —A Washington, DC, police officer just a few weeks before the March

“They warned us when I worked not to get involved in any race demonstrations. I did, on July 4, and I was laid off the next day.… They told me they got someone else because they thought I had a full-time job picketing.” —James Hauser, a freedom rider who travelled the 820 miles from St. Augustine, Florida, to attend the March

Excerpts from Nobody Turn Me Around: A People’s History of the 1963 March on Washington by Charles Euchner.

Posted at 09:33 AM in Nobody Turn Me Around, Race and Ethnicity in America | Permalink