Why Teachers Are Afraid

David Chura is the author of I Don’t Wish Nobody to Have a Life Like Mine: Tales of Kids in Adult Lockup. He has worked with at-risk teenagers for the past 40 years. For 26 of those years, he taught English and creative writing in community based alternative schools and in a county penitentiary. His writings have appeared in the New York Times as well as other scholarly and literary journals. He blogs at kidsinthesystem.wordpress.com. This post originally appeared at Huffington Post. 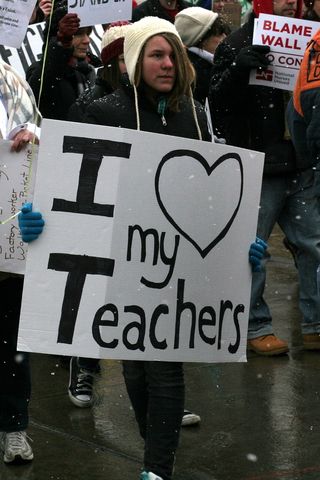 This isn’t about teachers being afraid that they’ll be knifed in class or have their cars stolen in the bad neighborhoods where they teach. Nor are they worried that a disruptive student will threaten them, or that a disturbed gunman will invade their school. It’s not about being berated by an angry parent, or accused of being unfair—or something far worse—by a student.

It’s a different kind of fear. I only began to understand this fear after I started the series “Teachers in Their Own Words” that I’ve been running on my blog Kids in The System.

I follow the education reform debate closely. Over time I realized that most of the voices raised in this debate were those of people who had nothing to do with the classroom. The obvious question was, “What do politicians, business executives, clergy, academic researchers know about teaching?” The people who would know best—teachers—were rarely heard. Yet the ones I knew and came in contact with were eager to talk about what they did. It was a decidedly different conversation from the ones the pundits and critics were having. Yes, most teachers lamented mandated testing, the loss of classroom autonomy and a one-size-fits-all curriculum shaped by test results. But most were happiest talking about what teaching has always been about: students and the amazing things they do (or don’t do, given the day).

So I decided to invite teachers from a variety of educational settings to share their experiences, to talk about why they teach and who they teach, and to tell the stories that keep them in the classroom.

Over the nine months that the series ran, I learned a lot. About what it was like teaching high school on a New Mexico reservation. About the challenges of teaching young offenders either still in prison or in a release program. The Monday after the Sandy Hook shootings, a kindergarten teacher shared the joy she felt talking and singing and having an ordinary day with her very much alive little people.  Another teacher wrote about the difficulties of teaching English Language Learners and the burden that Common Core put on her and her students. I heard about the importance of community college as a stepping stone to success for new citizens, older learners and younger students making their way. One teacher told readers why she planned on spending a weekend in Washington, DC, for an “Occupy Education” event, while another explored the weaknesses of the Common Core curriculum and its far-reaching impact. There was the poignant “resignation letter” from a young teacher who had “had enough,” deciding to leave public education for a private school because she felt disloyal to all she believed teaching should be. And then there was the teacher who felt that the only way she could stay in education was to leave it, immersing herself in a student self-directed learning program.

In approaching teachers to write for the series I was surprised how many at first hesitated. It wasn’t because they were too busy or didn’t have anything to say. Some had even written drafts and then gotten cold feet about going public. None of the articles were vindictive or critical of their school administrations. None were personal attacks or a fault finding feast. If anything the pieces were warmhearted, funny, and insightful. What criticism there was was directed toward our national education policy and its harmful effect on students. Still, in the end, a few teachers backed out altogether while others asked that their full name not be used or that their schools’ location be purposely vague.

And there’s the fear. Teachers were worried that somehow they would get in trouble with their school administrators. From what many teachers report there’s a strong message being given to teaching staffs: Don’t rock the boat. Don’t ask questions. Don’t bring up the inconvenient truth, say, of a school policy implemented to meet a national mandate that contradicts current research or best practices. In such an atmosphere of distrust, powerlessness, and alienation from what should be a culture of collegiality and collaboration what choices do teachers have but to hunker down and try to survive? After all, these days, teacher evaluations have become just as high stakes as student testing.

According to a MetLife Survey of the American Teacher, teacher satisfaction has slipped from 65% in 2008 to only 39% in 2012. Perhaps this fear of speaking out is contributing to that dissatisfaction. The sample of teachers that I encountered may seem small and therefore inconclusive. And maybe it’s just a coincidence that teachers from different schools and different parts of the country felt this fear, this need for caution. But it’s enough to make me wonder what is going on in our schools when teachers are afraid to engage in sincere democratic discourse, a process that we have always valued and that we teach our students is an essential ingredient of a healthy country.

Photo by Sue Peacock on Flickr. Used under Creative Commons.

Posted at 11:04 AM in American Society, David Chura, I Don't Wish Nobody to Have a Life Like Mine, Progressive Education | Permalink