In the second part of our literary examination of JFK's legacy, we begin with a look at the hopes that the next generation brought to JFK's candidacy, and how those hopes—combined with the pressures of the campaign and the mounting conflict in Vietnam—led to the impromptu "definition" of the Peace Corps during an unplanned campaign stop at the University of Michigan. Later, Claire Conner takes us to Dallas on the morning of November 22, 1963, where she as a curious young woman—and daughter of the national spokesman for the ultraconservative John Birch Society—had gone to see the presidental motorcade, only to witness anguish and paranoia in the aftermath of JFK's assassination. 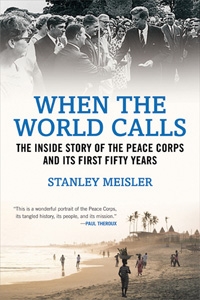 From When the World Calls: The Inside Story of the Peace Corps and Its First Fifty Years by Stanley Meisler:

A large crowd of students, perhaps as many as ten thousand, had been waiting several hours for a chance to glimpse the handsome and dynamic candidate. Deborah Bacon, the dean of women, had lifted the 11:00 p.m. curfew for women so they could take part. Freshman Eleanor Segal and her sister Sara, who was in high school, managed to make their way to a second-story window of the Union building so they could sit on the ledge, their feet dangling, and watch the candidate below. Joel Sherman, another freshman, and some classmates climbed an old tree alongside the building and perched on a massive branch. The morning was unusually warm and dry for Michigan in October, making the long wait tolerable, even pleasant.

Kennedy could not ignore the crowd or the microphone set up in front of the doors of the Michigan Union. Sorensen told his fellow speechwriter, Richard Goodwin, “He won’t just let them stand there. He’s going to speak. Maybe that’ll give us a chance to get something to eat. I’m starved.” The two aides slipped into the student cafeteria, knowing that Kennedy would not need them while talking to the students. In just a few moments, according to Goodwin, a campaign worker rushed into the cafeteria and announced, “You know what he just did? He proposed a peace corps.” That was an exaggeration.

In his talk, Kennedy had won immediate cheers of approval by introducing himself as “a graduate of the Michigan of the East, Harvard University.” He said that he would take the opportunity “to say one or two words about this campaign that is coming into the last three weeks.” Due to the problems pressing on the United States, he called this campaign the most important since the election of Franklin Roosevelt during the Great Depression. Then, without any warning, Kennedy issued a challenge.

“How many of you who are going to be doctors,” he demanded, “are willing to spend your days in Ghana? Technicians or engineers, how many of you are willing to work in the Foreign Service and spend your lives traveling around the world? On your willingness to do that, not merely to serve one year or two years in the service, but on your willingness to contribute part of your life to this country, I think will depend the answer whether a free society can compete.”

Joking that “this is the longest short speech I have ever made,” Kennedy concluded by asking their support for the election campaign and “for this country over the next decade.” The speech lasted barely three minutes. Before he reached his room for the night, he told his aide Dave Powers that he thought “he had hit a winning number.”

Kennedy had not proposed a peace corps, but he did plant its seed in that brief encounter at the University of Michigan. A plaque on the Michigan Union building now proclaims, “Here at 2:00 a.m. on October 14, 1960, John Fitzgerald Kennedy first defined the Peace Corps.” 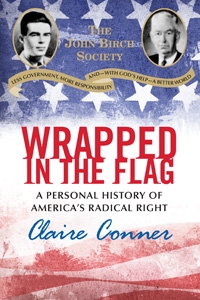 From Wrapped in the Flag: A Personal History of America's Radical Right by Claire Conner:

At 11 a.m. on Friday, November 22, I stood in the crowd on Main Street. The early morning rain had stopped and it was nearly seventy degrees. For a Chicago girl used to bundling up in November, that morning in Dallas was glorious. I stripped off my light jacket and lifted my face to the sun. Above me, red-white-and-blue banners hung in rows. As far as I could see, those pennants marched toward Dealey Plaza. People lining the street waved miniature American flags along with the occasional Confederate and lone star of Texas flags.

Around me, people chatted. Some talked politics; others talked weather. Everyone seemed perfectly polite. Given the anti-Kennedy drumbeat that characterized this right-wing city, I was surprised. It looked like the efforts of the Dallas officials, the chief of police, and the newspapers to tamp down the vitriol had worked.

Sometime later, people surged to the curb. To my right, I saw a line of motorcycles and a white convertible. I didn’t recognize any of the passengers. A long, black, open-top limousine followed. John Connally, governor of Texas, and his wife, Nellie, were in the first seat, but I barely noticed. My eyes were on Jackie Kennedy, sitting in the back seat and wearing a bright-pink pillbox hat. The president sat to her right. For the briefest second, he turned in my direction, smiled, and waved. I waved back.

“We’re with you all the way!” some people cried.

In less than a minute, the motorcade had passed. A few Dallas cops on motorcycles brought up the rear. Folks pushed to cross the street and head for their cars. I heard comments about “beating the worst of it” and “the traffic will be deadly.”

As I stepped off the curb, I noticed a rumpled paper on the ground. Staring up at me were two photographs of John Kennedy, a front and side image. “It’s a mug shot,” I thought. The banner below screamed “Wanted for Treason” in bold black letters. I picked up the sheet and scanned the list of grievances.

This man is wanted for treasonous activities against the United States:

These indictments of the president were not news to me. Over the last three years, I’d heard my father and other John Birch Society leaders attack Kennedy repeatedly for these same “crimes.” No doubt, the society hated this president. It wouldn’t have surprised me if Birchers in Dallas had printed the flyer.

Hours later, I fell onto my bed in the University of Dallas dorm. The president of the United States was dead and I was in shock. My neck hurt. I had a headache behind my eyes. My stomach growled, reminding me that I hadn’t eaten since breakfast, but I knew I couldn’t keep anything in my stomach. I needed to call my parents at home in Chicago.

My father picked up on the second ring. He immediately launched into a litany of the facts as he knew them.

“Don’t talk to anyone about this,” he warned me. “You may need a lawyer.”

“Did the Birch Society have anything to do with this?” I asked my father.

He hung up without answering.

Stanley Meisler, the author of two other books, was a foreign and diplomatic correspondent for the Los Angeles Times for three decades. He was also deputy director of the Peace Corps's Office of Evaluation and Research in the mid-1960s. Meisler, who lives in Washington, D.C., has written for Foreign Affairs, Foreign Policy, the Atlantic, the Nation, and Smithsonian., and periodically posts news commentaries on his website.

Posted at 03:30 PM in Claire Conner, History, Stanley Meisler, When the World Calls, Wrapped in the Flag | Permalink | Comments (0)

In the second part of our literary examination of JFK's legacy, we begin with a look at the hopes that the next generation brought to JFK's candidacy, and how those hopes—combined with the pressures of the campaign and the mounting conflict in Vietnam—led to the impromptu "definition" of the Peace Corps during an unplanned campaign stop at the University of Michigan. Later, Claire Conner takes us to Dallas on the morning of November 22, 1963, where she as a curious young woman—and daughter of the national spokesman for the ultraconservative John Birch Society—had gone to see the presidental motorcade, only to witness anguish and paranoia in the aftermath of JFK's assassination.

Now on Sale: The Young Crusaders