Note: This article and its accompanying updates appeared previously on Wen Stephenson's blog at The Nation. 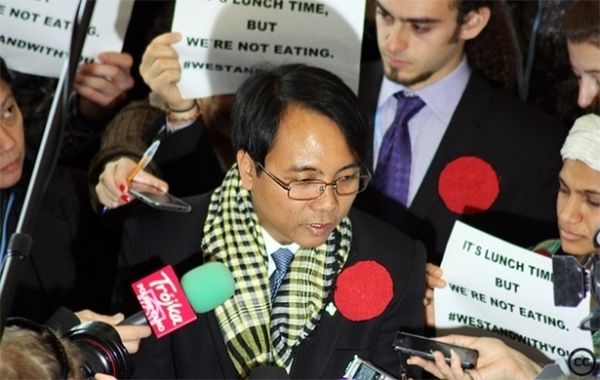 Hunger allows no choice
To the citizen or the police;
We must love one another or die.

W.H. Auden wrote that, sitting in a dive on 52nd Street nearly three-quarters of a century ago, as the world plunged into darkness on September 1, 1939. I’ve been thinking of those words a lot lately. Because it feels to me, and many others I know, like we’re poised at the edge of another darkness.

It’s a darkness already visible, right now, in the Philippines, where thousands are dead and many hundreds of thousands made refugees by the force of a storm like none had ever seen.

And it’s a darkness visible in the bright corporate halls of a conference center in Warsaw, where delegates to the nineteenth annual U.N. negotiations on climate change are divided and dithering, even as the window to prevent civilizational catastrophe rapidly closes.

In those same bright halls last Monday, during the opening session, the Philippines’ lead negotiator, Naderev Yeb Saño, announced in a powerful and emotional speech that he would eat no food for the duration of the twelve-day conference, or until meaningful action was taken to address the global crisis, and sparked an international outpouring of solidarity.

It so happens that two young friends of mine, Adam Greenberg and Collin Rees, recent Boston-area college grads, are in Warsaw as youth delegates to the U.N. conference with SustainUS, and they and other young people there immediately joined Saño in his hunger strike—and have now been fasting for more than a week. (Adam and Collin are allowing themselves some liquid nutrients so they can keep up the grueling conference schedule.)

By coincidence, it also happens that I spent this past weekend with a core group of about fifty committed student climate organizers from Students For a Just and Stable Future (SJSF) at their fall convergence in Worcester, Massachusetts, as they spent two full days in trainings and strategy meetings to strengthen their network and support the fast-growing grassroots climate movement in New England and beyond. And yesterday, the SJSF groups at Tufts and Brandeis launched a weeklong fast in solidarity with Saño and the people of the Philippines (as well as their friends Adam and Collin), and held a candlelight vigil in Cambridge. (Update: See their "Open Letter: Why We Are Fasting This Week," signed by students at 74 campuses.) They’re joined by people throughout Boston and the region, and coordinated fasts and vigils are being planned around the U.S. and the world for Thursday and Friday, the final days of the Warsaw conference.

These students (many of whom I’ve come to know personally as we’ve worked side by side in the 350 Massachusetts network) understand full well what’s happening to the climate, and are acutely conscious of the fact that time is running out for their generation—and, especially, those that will follow. They know that we simply cannot wait until 2020, or even 2015, to turn things around decisively. It has to be now. And they’re prepared to engage in the kind of hard work and struggle that building their movement will require.

In an email last week, Adam Greenberg told me:

I followed up with some questions for the two of them, and Collin Rees was able to respond last night. Noting that expectations for what the UN process can achieve are exceedingly low, I asked if he could describe what the atmosphere at the Warsaw conference was like coming in, and how the devastation in the Philippines and the action by Yeb Saño has changed it.

Collin Rees: Expectations from the UNFCCC are traditionally very low; this has been even more true in Warsaw. There was not a lot of hope for real action coming into the talks; there was some fairly vague talk about a loss and damage mechanism and some small hopes for moving on finance. Ever since Copenhagen expectations have been kept exceedingly low to avoid disappointment—I think they’ve actually been kept artificially low through this method, and this week has shown us there’s still a lot of hope.

People are now talking about real advances in the loss and damage arena, and tangible movement on finance. Discussions on REDD+ has been surprisingly hopeful, and sessions have run late into the night as countries continue debate. It hasn’t changed everything and expectations are still low, but I think we’re seeing real movement and that’s something we can continue to push for as we move into the second week.

I also asked what the goals of SustainUS were for Warsaw, and whether they had changed, and what the US delegation’s reaction has been, if any.

CR: SustainUS’s goals for Warsaw were largely related to two campaigns—inserting intergenerational equity into the negotiating text for 2015’s agreement and sparking a climate conversation in the U.S. about this June’s upcoming Clean Air Act Section 111(d) EPA standards for existing-source power plants. Both campaigns have been going well, but the domestic efforts especially have been augmented by Haiyan’s devastation and Sano’s courageous stand. The media is connecting climate change to real impacts, and the need for climate action is clear. The upcoming EPA regulations are a simple, easy way the U.S. can instantly become a leader on climate action, by implementing aggressive standards that force the worst energy sources out of the equation. These regs will be issued; the only question is how much of an impact they will have. They’re a chance to avoid a completely dysfunctional Congress and take real action with immediate impacts.

The large majority of the U.S. delegation didn’t show up until this week, so they’ve been largely absent from the dialogue thus far. We’re planning to bring it to their attention, but we’re also cognizant of the fact that they’ve essentially been given their marching orders from Washington and have very little flexibility in their actions here in Warsaw. What we need in the U.S. is aggressive domestic action, so that in the next two years we can come to these negotiations and be a real leader in the international sphere. This fast is about solidarity with climate change victims worldwide, but it’s also about getting action back at home (in every country, not just the U.S.).

I asked Collin, as someone in his early twenties, what he wanted people to understand about what’s happening there in Warsaw right now—not just in terms of the negotiations, but in terms of what’s truly at stake.

CR: We want people to understand that negotiators are coming to the table with full knowledge of the science of climate change and its devastating impacts. They’re coming with knowledge of what needs to be done, and the steps that need to occur to get to that point.

They’re coming with all of this knowledge, they’re waving their arms and giving windy, empty speeches for two weeks, and they’re walking away WITHOUT DOING ANYTHING. This is not a process that’s subtly flawed, it’s a process that’s being hijacked by a small group of countries who refuse to commit to action. That’s morally unacceptable.

[Update, 11/20/13: The Guardian reports that a bloc of 132 poor and developing countries (the G77 and China) have walked out of the Warsaw negotiations in an "orchestrated move," protesting wealthy nations' refusal to discuss "loss and damage" compensation until after 2015.]

A personal note: As I post this, I’m nearing twenty-four hours without food myself1, as I fast in solidarity with Yeb Saño, the people of the Philippines, people suffering the effects of climate change everywhere—and with these young friends of mine in Warsaw and at home. It’s a small thing, not eating for a day or two, by choice. A very small thing. And yet, fasting last week and again now, it has been a profound reminder of my physical connection to, well, everyone and everything.

“No one exists alone,” Auden wrote in that same poem, “September 1, 1939,” just before the lines about hunger and love I quoted at the outset. It’s also worth noting how Auden ended that poem. After telling us that “we must love one another or die,” he leaves us in the final stanza with an image that, the more I repeat it to myself, retains an uncanny staying power:

Defenceless under the night
Our world in stupor lies;
Yet, dotted everywhere,
Ironic points of light
Flash out wherever the Just
Exchange their messages:
May I, composed like them
Of Eros and of dust,
Beleaguered by the same
Negation and despair,
Show an affirming flame.

“Poetry makes nothing happen,” Auden wrote in another famous poem (his elegy for Yeats) earlier that same year, 1939. And yes, I know, my temporary self-imposed hunger doesn’t either.

But as all those fasting this week must feel in their guts and bones, it’s not really about the fast itself. It’s about the flame that started it—and keeps us going.

Wen Stephenson, a writer and climate activist, is a contributor to Grist and the Boston Phoenix and has written about climate and culture for the Boston Globe, The New York Times, and Slate. Follow him on Twitter.

Note: This article and its accompanying updates appeared previously on Wen Stephenson's blog at The Nation.

Hunger allows no choice
To the citizen or the police;
We must love one another or die.

W.H. Auden wrote that, sitting in a dive on 52nd Street nearly three-quarters of a century ago, as the world plunged into darkness on September 1, 1939. I’ve been thinking of those words a lot lately. Because it feels to me, and many others I know, like we’re poised at the edge of another darkness.

It’s a darkness already visible, right now, in the Philippines, where thousands are dead and many hundreds of thousands made refugees by the force of a storm like none had ever seen.

And it’s a darkness visible in the bright corporate halls of a conference center in Warsaw, where delegates to the nineteenth annual U.N. negotiations on climate change are divided and dithering, even as the window to prevent civilizational catastrophe rapidly closes.

Now on Sale: We Need to Build