Home About Beacon Press
Dasani, the Lost Generation, and the Hidden Side of Poverty
The Making of the War on Christmas

Dreaming of Miami in December 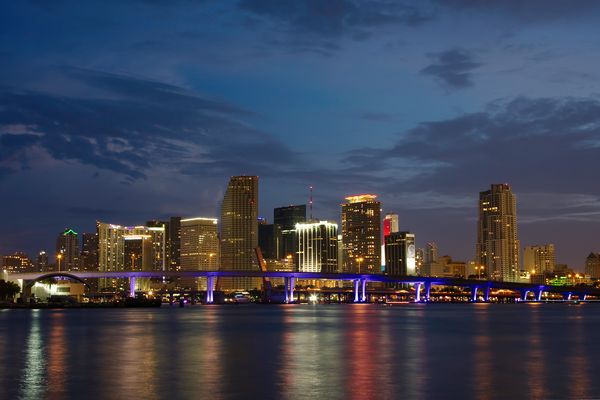 The snow burying my car this week had me dreaming of Miami, where I was lucky enough to spend four days late last month. I went for the 30th annual Miami Book Fair International, certainly the most exhilarating literary event of the year, and a rare opportunity for me to catch up with some of our own writers plus a few good friends I don’t see often enough. Beacon had four authors presenting this year, representing the range of our list and giving me the chance to hang out in the expansive author reception lounge, where chefs in toques offered breakfast, lunch, and endless tasty snacks.

First up for us was Mirta Ojito, who was born in Cuba, though the book she was presenting, Hunting Season, is a riveting account of the murder of an Ecuadorian man in a small town in Long Island. She spoke with Sheri Fink, whose new book, Five Days at Memorial, is one of my favorite *non-Beacon* works of nonfiction of the year, and Thomas Glave, who had contributed an introduction to one of our Bluestreak books some years back read from his new collection of essays, Among the Bloodpeople. The stories each of these 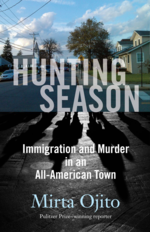 writers presented were sobering, cautionary ones, but the audience soaked them up gratefully. Mirta’s points about immigration in America were provocative; Sheri challenged us to think about euthanasia; and Thomas to confront homophobia. The question period could easily have gone an extra hour.

Back in the author reception area, I ran into a Beacon ally, Esmeralda Santiago, getting ready to speak on a Spanish panel: “Miami Book Fair and Latin American literature today and yesterday.” Esmerelda is the author, most recently, of the much praised novel Conquistadora, which would make a very good vacation read; I felt very lucky to have a few moments with her. Before I could make it to the buffet line, I had the great fortune to bump into Edwidge Dandicat who has been a strong supporter of our books over the last fifteen years. She was on her way to present her captivating new book, Claire of the Sea Light. And then to round off my lucky day, I found two Boston friends relaxing before their 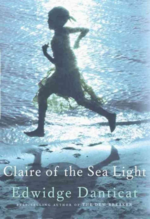 presentations: Richard Russo and Andre Dubus III. Both have published amazing memoirs this year, which I highly recommend: Elsewhere and Townie, though Andre was reading from his new fiction collection, Dirty Love, which I just finished listening to on audio (since  Andre reads it himself) and which is not to be missed if you like audio books at all. 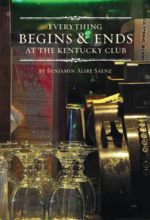 While we were scarfing down some Cuban specialties, I spotted Benjamin Alire Saenz, who won the Faulkner last year for his evocative story collection Everything Begins and Ends at the Kentucky Club. I was especially happy to meet Ben because he’s agreed to serve as one of three judges for the Hemingway Foundation/PEN Award this year and I was about to go off to meet one of the other judges, Scott Turow, whose novel Identical was just published this fall; I had hoped to introduce them in person, but those stars weren’t aligned. Still, I had the chance to thank both of them for taking on the daunting task of reading most of the first fiction published in 2013 (along 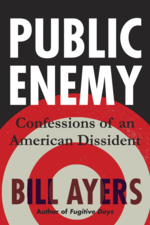 with the third judge, Indira Ganesan, who wasn’t at the fair this year). The awards will be presented at the JFK Library on  Sunday, April 6, 2014 and is open to the public, for those of you in New England. Mark your calendars. PEN New England will have a very special keynote address this year.

The next day I had the unique pleasure of doing an on-stage interview with Bill Ayers, America’s favorite Public Enemy, who flew in just in time to do a half dozen interviews before we went on stage to talk about his new book. I won’t tell you much about it since you can view the whole thing here except to say that toward the end I leaned over to alert Bill that we only had a minute left in the program slot, and he was so surprised he spontaneously whispered “what the f—” Which the microphone, needless to say, picked up. This gave some of our favorite right wing bloggers fodder for the afternoon, as in this version… 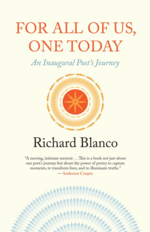 Back in the author lounge, I had time to grab some sweet snacks and catch up with our new author Richard Blanco. Mitchell Kaplan, most famous perhaps as a bookseller and as the originator and now chair of the board of the book fair, had introduced Richard to Beacon and to me, so I was happy to catch up to him and convince him to join us. We went together to Richard’s presentation of For All of Us, One Today. It was a sell-out crowd, probably as many Spanish speakers as native English ones—which was fine, Richard spoke in both 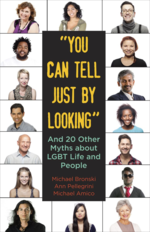 languages. He even showed family photos of growing up, a Cuban immigrant of course, in Florida. That played very well with the crowd, along with his wonderful poems.

Tragically, I had to duck out to make my plane so I missed Michael Bronski’s presentation of You Can Tell Just by Looking, though I had been lucky enough to catch him for dinner and a party the night before, and to have had some time to talk to him about his own books and the series he edits for Beacon, Queer Ideas and Queer Action. We had gone together to the official author party on the beach after dinner where we had run into a group of other friends, including Chris Castellani, author most recently of another book I highly recommend, All This Talk of Love. While enjoying the house punch, we had been introduced to Joyce Maynard, author of After Her, who had proposed that we all walk out to the water. Most of us had contented ourselves with slipping off our sandals and getting our feet wet, but Joyce had insisted on stripping down and diving in. An appropriate end to a night in Miami.

Helene Atwan has been director of Beacon Press since October 1995. She holds a Master’s degree in English Literature from the University of Virginia. She began her career in publishing at Random House in 1976, and has worked at Alfred A. Knopf; Viking Press; Farrar, Straus and Giroux; and Simon and Schuster. She served for eight years on the board of PEN-New England and is the Administrator of the Hemingway Foundation/PEN Award.

Posted at 12:15 PM in Bill Ayers, For All of Us, One Today, Helene Atwan, Hunting Season, Michael Bronski, Mirta Ojito, Public Enemy, Richard Blanco, You Can Tell Just by Looking | Permalink | Comments (0)

Dreaming of Miami in December

The snow burying my car this week had me dreaming of Miami, where I was lucky enough to spend four days late last month. I went for the 30th annual Miami Book Fair International, certainly the most exhilarating literary event of the year, and a rare opportunity for me to catch up with some of our own writers plus a few good friends I don’t see often enough. Beacon had four authors presenting this year, representing the range of our list and giving me the chance to hang out in the expansive author reception lounge, where chefs in toques offered breakfast, lunch, and endless tasty snacks.