Why We Need to Talk About Prophetic Fire: Announcing Three New Books with Cornel West

On November 26th, two trailblazing Beacon authors, Cornel West and Bill Ayers, stopped by our offices. Ayers' new book, Public Enemy: Confessions of An American Dissident, had recently been published and, although he was concluding a whirlwind 22 city tour, he was astonishingly energized. 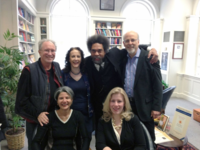 Although Ayers had dropped by for a quick visit, we had planned an all-day retreat with Professor West to work on two forthcoming titles: Black Prophetic Fire (October 2014), a book about the visionary legacies of select African Americans, from Frederick Douglass to Ella Baker. The second title, which West will edit, is The Radical King (January 2015). West’s Introduction will reveal how profoundly Martin Luther King. Jr.’s story has been both sanitized and “Santaclausified,” hiding his truly radical spirit.

To say it was a thrill to interact with Professor West would be an understatement. As I reflected on his hugely influential and bestselling title, Race Matters, I could hardly believe that this watershed book, which catapulted him to national prominence, was now two decades old. As I considered the climate in our country when it was published, I couldn’t help but think about Rodney King and the LA Riots—and as I then fast forwarded to today, a virtual ticker tape ran through my head including: Trayvon Martin and Renisha McBride, Obama’s presidency, the 2008 recession and its disproportionate impact on black and brown people, immigration today, the New Jim Crow. . . . And it occurred to me that we urgently needed a new Race Matters in order to better understand our complex times. And you won’t be surprised to read that we, at Beacon, believe the best person to write it—the inimitable thinker and activist we trust to stimulate and provoke us—is Cornel West.

This new book is yet untitled but we are thrilled to announce that Professor West has officially signed on and the publication date is fall 2016.

THE FOLLOWING IS EXCERPTED FROM CORNEL WEST'S INTRODUCTION TO BLACK PROPHETIC FIRE:

Are we witnessing the death of Black prophetic fire in our time? Are we experiencing the demise of the Black prophetic tradition in present-day America? Do the great prophetic figures and social movements no longer resonate in the depth of our souls? Have we forgotten how beautiful it is to be on fire for justice? These are some of the questions I wrestle with in this book.

After the assassination of Martin Luther King Jr., it is clear that something died in Black America. The last great efforts for Black collective triumph were inspired by the massive rebellions in response to Dr. King’s murder. Yet these gallant actions were met with increasing repression and clever strategies of co-optation by the powers that be. The fundamental shift from a we-consciousness to an I-consciousness reflected not only a growing sense of Black collective defeat but also a Black embrace of the seductive myth of individualism in American culture. Black people once put a premium on serving the community, lifting others, and finding joy in empowering others. Today, most Black people have succumbed to individualistic projects in pursuit of wealth, health, and status. Black people once had a strong prophetic tradition of lifting every voice. Today, most Black people engage in the petty practice of chasing dollars. American society is ruled by big money, and American culture is a way of life obsessed with money. This is true for capitalist societies and cultures around the world. The Black prophetic tradition—along with the prophetic traditions of other groups—is a strong counter-force to these tendencies of our times. Integrity cannot be reduced to cupidity; decency cannot be reduced to chicanery; and justice cannot be reduced to market price. The fundamental motivation for this book is to resurrect Black prophetic fire in our day—especially among the younger generation. I want to reinvigorate the Black prophetic tradition and to keep alive the memory of Black prophetic figures and movements. I consider the Black prophetic tradition one of the greatest treasures in the modern world. It has been the leaven in the American democratic loaf. Without the Black prophetic tradition, much of the best of America would be lost and some of the best of the modern world would be forgotten.

All the great figures in this book courageously raised their voices in order to bear witness to people’s suffering. These Black prophetic figures are connected to collective efforts to overcome injustice and make the world a better place for everyone. Even as distinct individuals, they are driven by a we-consciousness that is concerned with the needs of others. More importantly, they are willing to renounce petty pleasures and accept awesome burdens. Tremendous sacrifice and painful loneliness sit at the center of who they are and what they do. Yet we are deeply indebted to who they were and what they did. . . .

Gayatri Pataik is an executive editor at Beacon Press.

Why We Need to Talk About Prophetic Fire: Announcing Three New Books with Cornel West

On November 26th, two trailblazing Beacon authors, Cornel West and Bill Ayers, stopped by our offices. Ayers' new book, Public Enemy: Confessions of An American Dissident, had recently been published and, although he was concluding a whirlwind 22 city tour, he was astonishingly energized.