Learning to Listen, Learning to Be Heard: Healing from Sexual Assault by Telling the Story 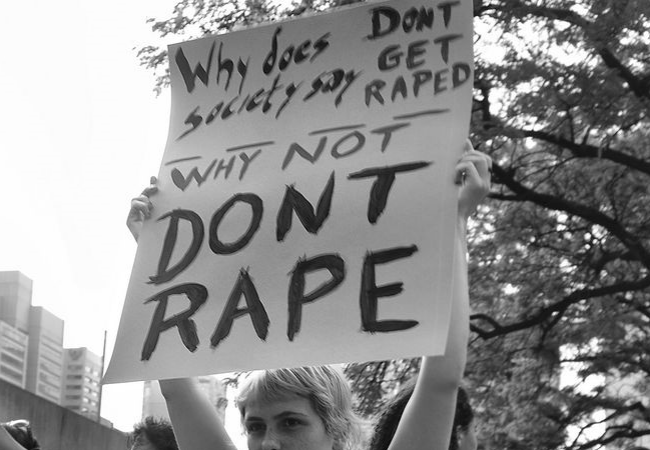 In October of 2008, Frank Warren, founder of PostSecret, came to my undergraduate campus in Macon, Georgia, where a single microphone was set up in front of the stage. At the end of his presentation, Frank opened the floor to anyone who wanted to share a secret aloud. A line slowly formed behind the first timid, sharers, as if by speaking each one was passing a baton of courage to the person behind them. The eighth or so speaker was a slender girl who drew back her shoulders before she spoke. “I don’t want to talk about this with anyone after we leave this room,” she said in a voice stronger and larger than expected, “but two years ago, I was raped by my high school boyfriend of five years. And my secret is that, while I can stand here and tell that to all of you, I cannot tell my mother.” With her back still straight, she stepped around the mic and returned to the rows full of anonymous students.

Anne Ream writes in her introduction to Lived Through This, “The sharing of a story, especially a story of having survived rape or sexual abuse, is inherently an act of faith in the listener.” This is because in the scope of stories surrounding tragedy, rape and sexual abuse are especially difficult to hear. Unlike the life story of the drug or alcohol addict, for instance, the true story of a rape victim is a story where choice was stripped away and redemption or justice are far too often missing in the endings. In a true story of rape and sexual assault, the victim is anyone, anywhere, and so is the villain. In the true story of sexual violence, the assault is not one contained event the protagonist undergoes and then overcomes in a timely manner. Sometimes even coherent endings are hard to find and the trauma seems to just trickle on. 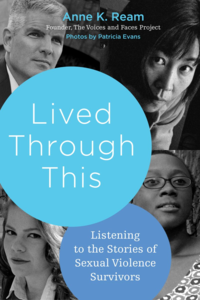 Rape stories are difficult to listen to and can leave the listener vulnerable, uncomfortable, and uncertain how to respond, yet in Lived Through This, Ream manages to model how to listen to the stories of survivors. A survivor herself, Ream first shares the story of her own assault, giving readers perspective into how control is completely taken away during an assault, and how the surrealism of that can cause one to focus on the oddest of details. For Ream, it was “Lucky Star” by Madonna, which was playing in the background. “Her music was a stand-in for life itself,” Ream writes, “a reminder of all the frivolous things I wished for and suddenly stood to lose.” In clean, simple prose, we are walked through a traumatic experience, yet also given meanings to details, despite the incomprehensibleness of rape itself. She does this first in her story and then in the stories of others. Through her model as listener, we see how to be angry on behalf of the victims, but also how to be forgiving, as in Ream’s account of author Dorothy Allison, whose mother could not protect her daughter from the abusive stepfather she remained married to all of her life.

In May of 2012, at the end of my first year of grad school and two days before my twenty-fifth birthday, I found myself locked in a friend’s apartment at 3AM with her drunk boyfriend between me and the door. I’d gone out drinking with several friends and, as the night wound down, he and I split a cab, as their apartment was next door to mine. My friend was out of town, and in the cab her boyfriend kissed me. I pushed him away wanting to make sure we weren’t getting the scenic tour of Boston in the middle of the night. I was tired and drunk and ready to be home. After paying for the cab, he asked me to come home with him. I refused. I remember that clearly, remember standing in the halo of the streetlamp, remember stomping my foot for emphasis, remember the warning bells going off in my head saying, “Be clear. Be clear that you mean no.” Still, he scooped me up, carried me to the ground floor apartment, and closed the door behind us, leaning hard against it.

I don’t know how long I was there, unable to even see his face in the dark, trying to convince him to let me out. I got lucky. The alcohol exhausted him and he went to sit down so we could “talk about it.” The moment he moved, I ran home.

Ream gives us the statistics: 1 in 3 women globally; 1 in 5 women in the United States; 1 in 4 college women; 1 in 6 boys before they reach eighteen. The numbers are difficult to stomach, but the numbers are not people; they offer no understanding of the long-term effects of sexual violence. They are just numbers.

Lived Through This is not just a collection of traumatic stories written down to make us as listeners feel helpless and hopeless and depressed for no reason. Each of the survivors profiled offers a glimpse of hope. Victims are not defined by their abuse. They become spokespersons, lawyers, founders, and mentors. One survivor tells Ream, “I never thought of this as ‘my story.’ It was a story I was telling for every woman who had ever been raped and then treated unfairly in the court of law.” “I wanted to stand with other survivors and help them talk about their stories, too,” says another. “Because none of us have anything to hide.”

Yet so many feel like they do have to hide. They hide because we don’t know how to listen. In the story of Beth, who was raped at nineteen on her college campus, we are intensely reminded that many victims remain silent out of fear of being blamed, ostracized, and harassed even further. Though her story is framed by the 112,000 petition signatures demanding better accountability for investigating and responding to reported assaults on college campuses, Ream’s earlier words about blindness and sexual violence and how so often we choose not to see what is in front of us become nauseatingly poignant.

For me, finding myself trapped in an apartment with a drunk, 6'2", war vet was a breaking point in a long series of traumatic events. Offering a lie as explanation to my family—which, like Ream’s family, fosters “the power of silences”—I got on a plane and flew home. I hadn’t purchased a return ticket. I considered quitting grad school and certainly had no inclination to return to my apartment and my assailant-neighbor. But home offered no community, no listeners I could trust not to ask why I was drinking, why I was out so late, why I was out with someone else’s boyfriend, what was I wearing. The only outlet I knew of was writing. So I returned to Boston, to grad school, and to writing workshops, but I did not return to “normal.” I panicked at house parties; something about being around people I thought I knew who were drinking, about being in their space and not my own, terrified me. The crowded train was another hurdle; I couldn’t be crammed into this small space with all these strangers. I was wary around people I knew, because, through trauma, I’d learned that they carried strangers in them. I was terrified of crowds of strangers because the unknown was also dangerous. I was not afraid of empty streets at night. Streets don’t assault you; people do.

In the months of paranoia, panic attacks, and nightmares that followed, I experienced intense isolation. I was ostracized from my friend group—“I just knew something like this was going to happen. You just exude sex.”—and terrified of everyone else, but the most frustrating part was being unable to convey any of this to anyone so that I felt understood. Finally, a longtime male friend said something to me I’d never considered. He explained that my stories were hard to hear because my fear translated to my audience so intensely, and that, as a man, he understood my fear was caused by other men. Listening to me made him afraid to think that perhaps he, as a boyfriend or friend, could mistakenly cause that fear himself. In listening to me, he was afraid that, as a man, he might also house this “predator-in-waiting,” like the ones that had caused me so much pain.

Of her own recovery, Ream writes, “Being truly heard will change your life. Which means someone has to do the listening.... It’s a hard thing to listen—truly listen—to another person. It often means getting so close to their suffering that it breaks our own hearts. But inside our open, broken hearts—that’s where compassion lies.” On the surface, Lived Through This presents a wide variety of victims and the many ways in which they found the strength, power, and hope to carry on with their lives. Between the lines, it also offers a variety of other stories. Those of fathers, mothers, social workers, friends, coworkers, boyfriends, and fellow survivors. People who supported each victim through the events, recovery, or telling of their trauma. What Ream gives us is not only the stories of survivors; she gives us the stories of listeners hearing, responding, and supporting those in need, though they are largely silent. We just have to learn to listen.

Six years later, I can tell my story to all of you, but I still cannot tell my mother.

Lyn Phillips works in the business department at Beacon Press. She received her BA in English from Mercer University in Georgia and attended Emerson College in Boston for a Master’s in Publishing and Writing. A transplant from the south, she misses the occasional Sunday breakfast of fried green tomatoes.

Posted at 05:00 PM in A History of Religion in 5 ½ Objects, Anne K. Ream, Feminism, Gender, and Sexuality, Lived Through This | Permalink | Comments (0)

Learning to Listen, Learning to Be Heard: Healing from Sexual Assault by Telling the Story

In October of 2008, Frank Warren, founder of PostSecret, came to my undergraduate campus in Macon, Georgia, where a single microphone was set up in front of the stage. At the end of his presentation, Frank opened the floor to anyone who wanted to share a secret aloud. A line slowly formed behind the first timid, sharers, as if by speaking each one was passing a baton of courage to the person behind them. The eighth or so speaker was a slender girl who drew back her shoulders before she spoke. “I don’t want to talk about this with anyone after we leave this room,” she said in a voice stronger and larger than expected, “but two years ago, I was raped by my high school boyfriend of five years. And my secret is that, while I can stand here and tell that to all of you, I cannot tell my mother.” With her back still straight, she stepped around the mic and returned to the rows full of anonymous students.