Home About Beacon Press
At the Core of Everything: A Q&A with Daisy Hernández
Andrew Cuomo and the Future of Fracking

As we step into the new school year, parents and teachers need a hearty reminder that all the quirky, alarming, troubling, and troublesome behaviors manifested by children, though concerning, are not evidence of a mental disorder. As a society we seem to have lost the ability to step back and use good common sense and developmentally-informed thinking to understand kids’ difficult behavior. Instead, we seem enamored with diagnoses, assuming it smacks of sophistication to conclude that forgetfulness and distractibility in a child must indicate ADHD, or that poor eye contact and a business-like tone equals autism spectrum disorder, or that explosive emotional outbursts and impulsivity in a teen are clear-cut evidence of bi-polar disorder.

Assigning a diagnosis to a kid—if it is accurate—can open the door to services that might have a transformative effect: special education interventions, medication, psychotherapy. However, assigning a diagnosis to a kid—if it is inaccurate—can have adverse effects, many of which parents and teachers are unaware. There is the obvious one: an unnecessary course of medication with possible harm caused by side-effects. For instance, psychostimulant medications like Ritalin and Adderall have been linked to appetite and growth issues, as well as sleep irregularities. Nonetheless, there are other deleterious effects associated with a mental health diagnosis that are not well known. A diagnosis can follow a kid into adulthood and disqualify him or her from a host of careers in government, law enforcement, and the private sector that require security clearances ruling out mental illness. In many states across the nation you cannot adopt a child, or obtain a trucker’s or pilot’s license, with a history of mental illness. And, even though there is greater public acceptance of mental illness—even casual discussion of it in our society—studies have shown that, privately, most Americans still believe that an ADHD or depressed child is a potentially violent child. In short, health and mental health professionals need to be conservative in assigning diagnoses, and parents and teachers need a clearer understanding of the broad swath of normal in children before acting on any diagnostic suspicions. 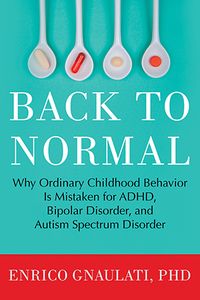 Many of the symptoms of ADHD link up with everyday childhood challenges: problems waiting one’s turn; forgetfulness; ending mentally arduous tasks prematurely; distractibility; being action oriented; overtalking. Most young children struggle in these areas. This is especially the case if they are slow-to-mature in terms of their socio-emotional development, and if they are put outside of their comfort zones in terms of what they are developmentally capable of, given the cognitive, academic, and socio-emotional expectations placed upon them in the classroom.

Take the child who has not received a quality preschool experience with all its socialization benefits, who has not been exposed to reading or writing enrichment at home, and who has not been availed with opportunities for active, kinetic, pretend play through which to acquire expressive mastery of strong emotions. When put in a kindergarten classroom and expected to sit and listen for long periods of time, forego play breaks, cooperate with peers, hold and use a pencil effectively, and read along with the teacher, that child is likely to look ADHD. And, if that child is a boy, and younger in age than his classmates, he is very likely to look ADHD. In fact, there is robust scientific evidence showing that, on average, boys in early childhood are at least a year behind girls in the things that matter in kindergarten: self-regulation, or inhibiting one’s impulses; use of the “tripod” pencil grip; and reading.

So, before we jump to conclusions about suspected ADHD in a young child, especially in a younger, slow-to-mature boy, good common sense and developmentally-informed thinking need to be exercised first.

Believe it or not, rigid implementation of standard classroom grading practices can have effects on certain older students that make parents and teachers alike suspect a case of sudden-onset of ADHD. Parenthetically, ADHD is not a condition that is absent one year, then emergent the next. There is no such thing as sudden-onset ADHD. When the diagnosis applies, ADHD symptoms of hyperactivity and inattention need to have been present and continuous since the preschool years. Absurdly, sometimes supposed sudden-onset ADHD is the direct outcome of a teacher, or several teachers, assigning a student zero points for missing or incomplete assignments. On many occasions I have been called into school meetings for child clients of mine who are in an ADHD red-zone. Curiously, when I eyeball the child’s grade printout, there’s a lineup of radically different grades: A, A, A, B, B, F, F, A. The case is made for ADHD, that we have on our hands an A/B student who is underperforming and getting a C grade because of forgetfulness and disorganization. I make the counterargument that giving zero points for an F related to incomplete or missing work is the source of the student’s supposed underachievement, not ADHD. A teacher could have allotted 50, 55, or 59 points to an F grade that would have then resulted in the student’s grade of a strong B, and a more accurate representation of his or her overall performance in that class.

Indeed, the more adult-like organizational demands we place on middle- and high-schoolers—upping the homework and expecting students to meet tight deadlines, demanding that students follow detailed rubrics, and the like—and factor this into grading practices, the more it hurts boys, who many studies show are one to three years behind girls in being “conscientious.”

This is notwithstanding the larger question of what is normal as regards the average child’s attention span. We know very little about what effects the widespread exposure to new technologies might have on the next generation of kids. These technologies are stimulation-rich, lighting fast in processing information and providing feedback, and heavily visually-oriented (versus saturated with printed textual material requiring focused reading). Psychologists are still studying what impact they might be having on a child’s ability to be engaged and educable in the standard chalk-and-talk classroom.

So, as the new school year gets underway, parents and teachers need to preserve common sense, and think psychologically, before rushing to assume that the troubling and troublesome behavior they see in children under their charge must indicate a diagnosis.

Enrico Gnaulati Ph.D., is a clinical psychologist based in Pasadena, California. His work has been featured on Al Jazeera America, KPCC Los Angeles, Wisconsin public radio, and online at The Atlantic and Salon. He is the author of Back to Normal: Why Ordinary Childhood Behavior Is Mistaken for ADHD, Bipolar Disorder, and Autism Spectrum Disorder.

As we step into the new school year, parents and teachers need a hearty reminder that all the quirky, alarming, troubling, and troublesome behaviors manifested by children, though concerning, are not evidence of a mental disorder. As a society we seem to have lost the ability to step back and use good common sense and developmentally-informed thinking to understand kids’ difficult behavior. Instead, we seem enamored with diagnoses, assuming it smacks of sophistication to conclude that forgetfulness and distractibility in a child must indicate ADHD, or that poor eye contact and a business-like tone equals autism spectrum disorder, or that explosive emotional outbursts and impulsivity in a teen are clear-cut evidence of bi-polar disorder.