Home About Beacon Press
The Hidden Costs of Abortion Restrictions
How to Live a Lie in Mercury, Pennsylvania

What Cornel West and Ella Baker Can Teach Us about Ferguson

Sometime in the afternoon of Monday, October 13—Columbus Day or Indigenous Peoples’ Day depending on who you ask—the culmination of a weekend of organized protests in Ferguson, Missouri, news started trickling through Twitter and other media platforms that Cornel West and several other clergy members and activists had been arrested while trying to peacefully enter the Ferguson Police Station and request a meeting with Ferguson Police Chief Thomas Jackson. Photos from the moment are striking, instantly iconic: Dr. West knocked off his feet, grimacing mid-fall, his rain-streaked glasses reflecting the neon green riot jackets of the officers lined in front.

Last weekend’s Ferguson October protests were in one sense a call for remembrance, an urging to not forget the outrage that flowed through the small town in the wake of Mike Brown’s death. They were also the natural heir to an ongoing movement of “deep democratic revolution,” as West might put it, civic resistance to a system of institutional racism that has oppressed Black Americans in one form or another for centuries. Though written before the fateful day when Brown’s shooting would make Ferguson the unlikely fulcrum of a new Black protest movement, West argues in Black Prophetic Fire that the current “prison-industrial complex”—with its militarized police forces and its all-too-lethal enforcement tactics—is on the same continuum as slavery and Jim Crow. In one particularly insightful exchange, the scholar Christa Buschendorf asks West what the people can do to enact real change against this difficult backdrop of history. West’s response tackles both the urgency and complexities at stake, and the very necessary roadmap to breaking the “cycles of domination” that Brown’s death reminded the world were still very much in existence. They’re talking about Ella Baker taking her rightful place in civil rights history, but they could be talking about Ferguson October, and about what all of us bystanders to the new history being made there can do to help in the struggle. 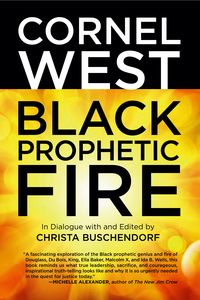 Christa Buschendorf: So the question is, how can change be brought about with the powers that be? Should we, like anarchists, work locally and change the system on the level of the local community and go on from there, and change it radically at a particular place and in a particular moment and thus make at least a small difference, rather than battling and struggling in market time and being shot dead or defeated? The question becomes the more urgent when we look at what we are fighting for and against right now and compare it to the past, when Ella Baker—just as you and many others still do in the present—talked about poverty and civil rights.

Cornel West: But I wonder—here my own view becomes more manifest and pressing—when you look at it from the perspective of the powers that be, what do they find most threatening? That’s always a measure, you see. And they are threatened by any serious challenge to their oligarchic power, to their profit-driven economic system and their cultural forms of distraction that keep the masses pacified. And I think that in the long run, they are more threatened by Ella Baker’s mode of engagement; in the short run, they are more threatened by Martin King’s mode of engagement, because for the FBI and the CIA and other repressive apparatuses in the nation-state in which we live, that patience and that receptivity, you can keep track of that more easily, and you can infiltrate it quicker, whereas if the people who don’t have revolutionary consciousness but do have a love for one leader, they see that leader shot down and mistreated, they are more likely to rebel. Now, that’s not revolutionary action; that’s rebellion. And given the constraints of the system, in which electoral politics is so much dominated by big money and so forth, it’s the rebellions that have played a fundamental role in getting concessions from the powers that be, more so than the long-term organizing that’s quiet on the margins, hardly visible. When you have two hundred cities going up in flames, the powers that be have to concede something. They could go fascist and say, “No concessions at all,” or they can be moderate and say, “We have to give a little bit. We have to be open for the expansion of the middle class. We have to bring in a relatively privileged people from the working class: women, Black folk, brown folk, red folk, or whatever.” This middle class of color is a lumpenbourgeoisie beneath the wealthier white bourgeoisie.

But I do think that—this is the Chekhov in me, of course—I think that the cycles of domination and the cycles of death and the cycles of dogmatism are so deeply entrenched in human history, that more than likely the best we can do is to break the cycle. And even what we call revolution, when you think you really have broken the cycle in, say, the Soviet Union, Cuba, or what have you, the same cycle comes right back in new clothing. The men are heroic against the white supremacist powers, but look what they’re doing to the women, and the straights are heroic, but look what they are doing to the gay brothers and lesbian sisters and bisexuals and transsexuals and so forth. Or the elderly seem to be heroic, but look how they are demeaning the youth—these different kinds of cycles. And, so, I am not suggesting that there are no breakthroughs or progress or betterment or amelioration, but Ella Baker is most relevant because she tells a fundamental truth about the need for democratic organizing. King becomes highly relevant in our time, less relevant than Ella in regard to democratic leadership. Ella Baker and Fannie Lou Hamer stand above Martin Luther King in their democratic existentialism; their democratic leadership and horizontal organization stand above his messianic leadership and hierarchical organization. All three have a love supreme for the people that is so visible, that cannot be denied. King’s organizing fits well with market time and his murder generated massive outrage, and you end up with a real rupture in the cycle. It’s not a change in the system, but it’s a rupture in the cycle, and the powers that be have to make some concessions, you see. But deep democratic revolution requires the democratic existentialism of Ella Baker and Fannie Lou Hamer.

Rob Arnold is the digital marking associate at Beacon Press and editor of the Beacon Broadside.

What Cornel West and Ella Baker Can Teach Us about Ferguson

Sometime in the afternoon of Monday, October 13—Columbus Day or Indigenous Peoples’ Day depending on who you ask—the culmination of a weekend of organized protests in Ferguson, Missouri, news started trickling through Twitter and other media platforms that Cornel West and several other clergy members and activists had been arrested while trying to peacefully enter the Ferguson Police Station and request a meeting with Ferguson Police Chief Thomas Jackson. Photos from the moment are striking, instantly iconic: Dr. West knocked off his feet, grimacing mid-fall, his rain-streaked glasses reflecting the neon green riot jackets of the officers lined in front.