Home About Beacon Press
Obama’s Immigration Mandate: What the President Got Wrong
The Myth of Thanksgiving

Places to Remember: In Memory of Leslie Feinberg 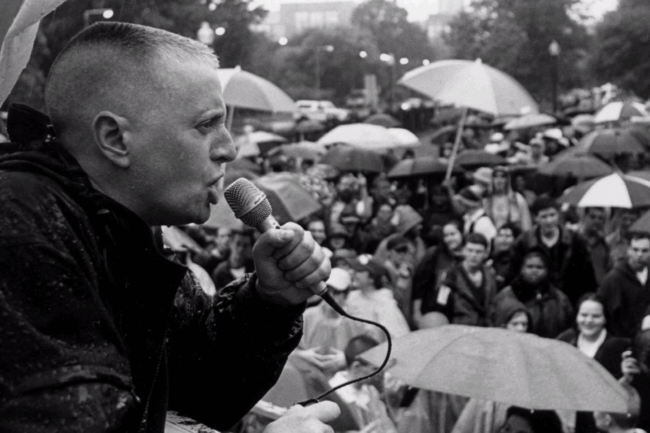 Leslie Feinberg speaks at a rally

Sometimes with a book, you don’t hold onto passages or plot lines but rather places. And not even the places where you read the book or the places in the book, but other places. Places that somehow feel more true to the book than anything else.

There was a sofa. The cushions were soft, the color of mauve or cinnamon or some other word I hadn’t known could be applied to pillows until I met people after college who worked in offices and bought sofas like that. I sat on the sofa in the conference room. I was in my early twenties. It was the late nineties. I was working at NYU Press. The conference room had a sofa and also a piece of furniture made of a dark wood. It was the book cases maybe or a table or a side table or all three. I hadn’t grown up with any furniture made of real wood, and I sat on the sofa that day and I felt the difference, how there was a weight in that room, a kind of permanence I knew had to do with money and whiteness and being normal. My family and I had lived in the same corner of Jersey for more than twenty years, but our kitchen cabinet and my desk with their particleboard constructions filled our home like our lives did—they were easy to throw away.

The conference room had a low ceiling. It was around six in the evening. There was the wood and the mauve sofa cushions and me holding hands with him. We were trying to decide where to eat and where to go after that because I was twenty-one but he wasn’t. And he didn’t have a driver’s license that matched the two precious letters: He. And I sat in that conference room and felt I was inside the pages of Stone Butch Blues because Leslie Feinberg had written about life the way it felt. Because I was reading the book, I knew I couldn’t tell my beloved that he had heart-shaped lips. It would bruise him. And I understood that I was being selfish, wanting him to be soft and hard at the same time the way Leslie had written. And I understood too that because Stone Butch Blues existed as a book on a secret shelf in my room at my parent’s house, I was not alone with this and I did not have to be normal. Not really.

It was also about the wood furniture in that conference room.

I had grown up with parents and aunties who worked in factories, whose bodies tightened and curled and collapsed into kitchen chairs at the end of shifts. Before Stone Butch Blues, I didn’t know factories existed in literature. Not in the voices of the people who actually worked in them. Leslie wrote about arms trembling with exhaustion and time clocks that did not only measure minutes and seconds, but friendships and love, too.

And it was in Stone Butch Blues that I first read about union work and queer folks. Before the conference room, before the wood furniture, before college, I had been in a union at the chain supermarket where I worked during high school. We went on strike at one point, and I spent the better part of an afternoon pleading on a megaphone with customers to boycott the store. I did that until a customer marched up to me, baring his teeth and threatening to punch me in the face if I didn’t stop. Reading Stone Butch Blues, I learned I was not the only queer kid who’d been in a union and wanted to write. Leslie’s novel stitched my life to a larger cuento.

Leslie went on to write Transgender Warriors, Trans Liberation, and Drag King Dreams. She/zie continued organizing against inhumanity in all its forms and she/zie continued making life and home with the writer Minnie Bruce Pratt (yes, another literary heroine of mine). I’ll always remember Leslie though for Stone Butch Blues and for giving me and so many readers places to remember.

Read another remembrance of Leslie Feinbergan, plus an excerpt from Trans Liberation, elsewhere on our blog. Learn more about the transgender experience with these book recommendations.

Daisy Hernández is the author of A Cup of Water Under My Bed, a coming-of-age memoir about shaping lessons from home into a new, queer life. She coedited Colonize This! Young Women of Color on Today’s Feminism and is the former editor of ColorLines magazine. She speaks at colleges and conferences about feminism, race, and media representations, and her writing has appeared in the New York Times, Ms. magazine, CultureStrike, In These Times, Bellingham Review, Fourth Genre, and Hunger Mountain, and on NPR’s All Things Considered.

Posted at 11:00 AM in A Cup of Water Under My Bed, Daisy Hernández, Leslie Feinberg, Queer Perspectives, Trans Liberation, Transgender Warriors | Permalink | Comments (0)

Places to Remember: In Memory of Leslie Feinberg

Leslie Feinberg speaks at a rally

Sometimes with a book, you don’t hold onto passages or plot lines but rather places. And not even the places where you read the book or the places in the book, but other places. Places that somehow feel more true to the book than anything else.