Home About Beacon Press
The Tyranny of the Meritocracy: What Happens When We Value Test Scores Over Character?
The Fact and Fiction of Islamic Anti-Semitism

President Obama delivered a fiery State of the Union earlier this week, immediately making headlines (and exploding the Twittersphere) for a now-famous ad-libbed line about winning both elections. Chatter about the unplanned quip, however, threatened to overshadow the more substantive parts of the President’s speech, in which he promised to tackle inequalities in income, education, and immigration as well as offering concrete measures for slowing climate change, benefiting veterans, closing tax loopholes, and the like. It was also, notably, the first time a President has used the word transgender during a State of the Union address.

For those looking for deeper insight into some of the issues Obama spoke about, we’ve created a State of the Union reading list, and highlighted a few specific titles below:

Will we accept an economy where only a few of us do spectacularly well? Or will we commit ourselves to an economy that generates rising incomes and chances for everyone who makes the effort? 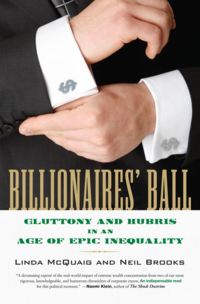 Billionaires’ Ball: Gluttony and Hubris in an Age of Epic Inequality
by Linda McQuaig and Neil Brooks

Between 1980 and 2008, the incomes of the bottom 90 percent of Americans grew by a meager 1 percent compared to a whopping 403 percent for the top .01 percent. We tend to regard these large fortunes as proof of a meritocracy, yet there is no evidence that members of today’s super-rich are any more talented or hardworking than were the elite of a generation ago. Via vivid profiles of billionaires—ranging from philanthropic capitalist Bill Gates and the infamous Koch brothers to brazen private equity baron Stephen Schwarzman—Billionaires’ Ball debunks the notion that they “deserve” their grand fortunes, when such wealth is really a by-product of a legal and economic system that’s become deeply flawed and is now threatening the quality of life and very functioning of our democracy. 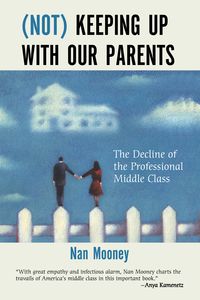 (Not) Keeping Up with Our Parents: The Decline of the Professional Middle Class
by Nan Mooney

The first book to exclusively target the struggles of the professional middle class-educated individuals who purposely choose humanistic, intellectual, or creative pursuits, Nan Mooney’s (Not) Keeping Up with Our Parents is a simultaneously sobering and proactive work that captures a diversity of voices.

Drawing on more than a hundred interviews with people all across America, Mooney explores how stagnant wages, debt, and escalating costs for tuition, health care, and home ownership are jeopardizing today’s educated middle class. Despite this difficult reality, Mooney offers concrete ideas on how individuals and society can arrest this downward spiral.

By the end of this decade, two in three job openings will require some higher education. Two in three. And yet, we still live in a country where too many bright, striving Americans are priced out of the education they need. It’s not fair to them, and it’s not smart for our future. 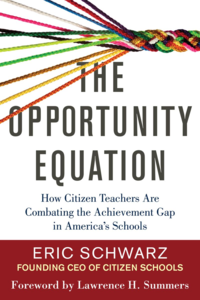 The Opportunity Equation: How Citizen Teachers Are Combating the Achievement Gap in America's Schools
by Eric Schwarz

Parental wealth now predicts adult success more than at any point in the last hundred years. And yet as debates about education rage on, and wealth-based achievement gaps grow, too many people fix the blame on one of two convenient scapegoats: poverty or our public schools. But in fact, low-income kids are learning more now than ever before. The real culprit for rising inequality, Eric Schwarz argues in The Opportunity Equation, is that wealthier kids are learning much, much more—mostly outside of school. In summer camps, robotics competitions, sessions with private tutors, and conversations around the dinner table, children from more affluent families build the skills and social networks that propel them to success.

In The Opportunity Equation, Schwarz tells the story of how he founded the pioneering Citizen Schools program to combat rising inequality by bringing these same opportunities to children who don’t have access to them. 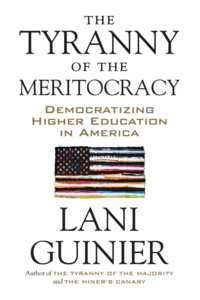 The Tyranny of the Meritocracy: Democratizing Higher Education in America
by Lani Guinier

Goaded on by a contemporary culture that establishes value through ranking and sorting, universities assess applicants using the vocabulary of private, highly individualized merit. As a result of private merit standards and ever-increasing tuitions, our colleges and universities increasingly are failing in their mission to provide educational opportunity and to prepare students for productive and engaged citizenship.

To reclaim higher education as a cornerstone of democracy, Guinier argues that institutions of higher learning must focus on admitting and educating a class of students who will be critical thinkers, active citizens, and publicly spirited leaders. Guinier presents a plan for considering “democratic merit,” a system that measures the success of higher education not by the personal qualities of the students who enter but by the work and service performed by the graduates who leave. Guinier argues for reformation, not only of the very premises of admissions practices but of the shape of higher education itself.

Yes, passions still fly on immigration, but surely we can all see something of ourselves in the striving young student, and agree that no one benefits when a hardworking mom is taken from her child, and that it’s possible to shape a law that upholds our tradition as a nation of laws and a nation of immigrants. 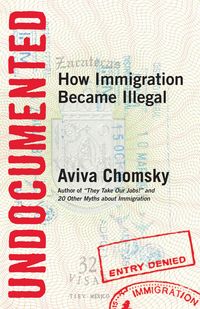 In this illuminating work, immigrant rights activist Aviva Chomsky shows how “illegality” and “undocumentedness” are concepts that were created to exclude and exploit. With a focus on US policy, she probes how people, especially Mexican and Central Americans, have been assigned this status—and to what ends.

Blending history with human drama, Chomsky explores what it means to be undocumented in a legal, social, economic, and historical context. The result is a powerful testament of the complex, contradictory, and ever-shifting nature of status in America. 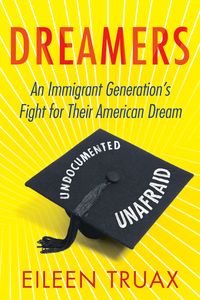 Dreamers: An Immigrant Generation's Fight for Their American Dream
by Eileen Truax

Of the roughly twelve million undocumented immigrants living in the United States, as many as two million came here as children. They grow up here, going to elementary, middle, and high school, and then the country they call home won’t (in most states) offer them financial aid for college, and they’re unable to be legally employed. In 2001, US senator Dick Durbin introduced the DREAM Act to Congress, an initiative that would allow these young people to become legal residents if they met certain requirements. More than a decade later, in the face of congressional inertia and furious opposition from some, the DREAM Act has yet to be passed. In recent years, this young generation of Dreamers has begun organizing, and with their rallying cry “Undocumented, unapologetic, and unafraid,” they are the newest face of the human rights movement. In Dreamers, Eileen Truax illuminates the stories of these young men and women, who are living proof of a complex and sometimes hidden political reality that calls into question what it truly means to be American. (Forthcoming March 2015)

The best scientists in the world are all telling us that our activities are changing the climate, and if we do not act forcefully, we’ll continue to see rising oceans, longer, hotter heat waves, dangerous droughts and floods, and massive disruptions that can trigger greater migration, conflict, and hunger around the globe. The Pentagon says that climate change poses immediate risks to our national security. We should act like it. 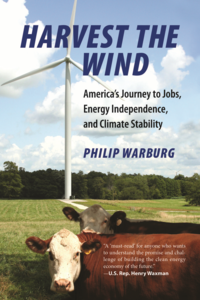 In Harvest the Wind, Philip Warburg tells the story of America’s energy future as it has not been told before. Cloud County is home to the Meridian Way Wind Farm, whose turbines are boosting farm incomes and bringing green jobs to a community that has watched its children flock to more exciting lives and less taxing jobs elsewhere. This remote corner of Kansas is the first stop on an odyssey that introduces readers to farmers, factory workers, biologists, andhigh-tech entrepreneurs--all players in a transformative industry that is fast taking hold across America and around the globe. Warburg describes America’s race to keep pace with competitors in China and Denmark, and looks closely at the health and environmental concerns that have aroused some angry wind-farm neighbors. He also describes what it will take to make wind energy a serious alternative to conventional fuels and nuclear power. Warburg draws from his work as a lawyer and policymaker on energy and environmental issues, and on his skills as a journalist to convey the human side of a story about bringing the American heartland back to life. 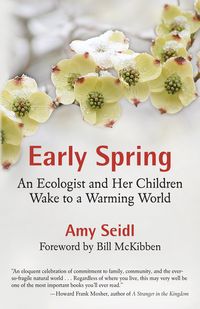 Early Spring: An Ecologist and Her Children Wake to a Warming World
by Amy Seidl

In Early Spring, ecologist and mother Amy Seidl examines climate change at a personal level through her own family’s walks in the woods, work in their garden, and observations of local wildlife in the quintessential America of small-town New England, deep in the Green Mountains of Vermont.

Seidl’s testimony, grounded in the science of ecology and evolutionary biology but written with beauty and emotion, helps us realize that a natural upheaval from climate change has already begun: spring flowers blossom before pollinators arrive, ponds no longer freeze, and animals begin migrations at unexpected times. Increasingly, the media report on melting ice caps and drowning polar bears, but Seidl brings the message of global warming much closer to home by considering how climate change has altered her local experience, and the traditions and lifestyles of her neighbors, from syrup producers to apple farmers.

President Obama delivered a fiery State of the Union earlier this week, immediately making headlines (and exploding the Twittersphere) for a now-famous ad-libbed line about winning both elections. Chatter about the unplanned quip, however, threatened to overshadow the more substantive parts of the President’s speech, in which he promised to tackle inequalities in income, education, and immigration as well as offering concrete measures for slowing climate change, benefiting veterans, closing tax loopholes, and the like. It was also, notably, the first time a President has used the word transgender during a State of the Union address.

For those looking for deeper insight into some of the issues Obama spoke about, we’ve created a State of the Union reading list, and highlighted a few specific titles below: