Today Beacon Press takes part in the international conversation highlighting stories of people with disabilities. In honor of the twenty-fifth anniversary of the ADA, we present two disability stories: one from Terry Galloway, the other from Suzanne Kamata. 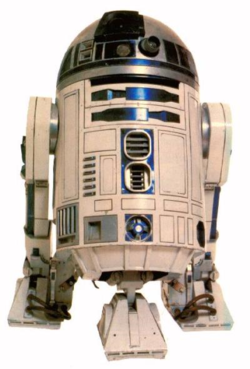 When I was deaf as a doornail, I suffered severe cell phone envy, which is far worse than penis envy because everyone’s got a cell phone.

Now I have a Bluetooth-enabled cochlear device that makes it seem as if the caller is speaking right inside my head.

It’s a little spooky because, growing up, I actually did hear voices speaking inside my head.

When I was nine, thank god, I was finally diagnosed as having—and I quote—“a chemical imbalance caused by the introduction of drugs to the fetal nervous system.” It was the aftereffects of those drugs that had set the nonexistent voices chattering and left my ears kaput.

(As an aside, my mother wasn’t a drug addict. When she was six months pregnant with me, she developed a kidney infection that had to be treated with mycine antibiotics that sadly had unfortunate effects on the fetus—i.e. me).

These last five years that I’ve been a cyborg I’ve loved every minute of it. The fake joint connecting my femur to my thigh lets me kick the shit out of a soccer ball again.

And the electrical wires snaking through my inner ears fool my brain into thinking I’m hearing.

And I am hearing. Just not the way most people do. Most brains hear via sound waves. Mine hears via electronic impulses that—until your brain settles down and gets used to it—make human speech sound like the electronic gibberish of R2D2.

One of my great pleasures in life now is to drop things—pans, silverware, heavy boots, hefty books, any old thing at hand that won’t shatter—just to hear the clatter, the clang, the ping, and the thud of it.

At night I love listening to the idiot frogs croaking their love songs and discontents because they sound like windshield wipers squealing against dry glass.

When a summer storm whips up and the winds get tropical, I stand out on our front porch and listen. When the wind bullies through the leaves like that, the trees do seem to be talking to you or just making a racket.

Even the humiliations of hearing again are worth it, like hearing myself pee for the first time or realizing that I’d been mistaken all those years I’d thought I’d been silently farting.

Am I conveying the joy of all of this? The playfulness I feel in hearing again? In having been so fundamentally changed? I hope so. 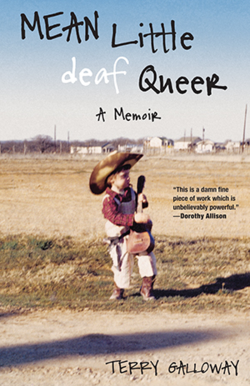 I think back to when I was a little girl decked out for the first time in the box hearing aid that fit between my budding boobs like a third one. I’d just started my periods and was fat as pig. I had a dork kid hairdo and coke bottle glasses. I remember staring at myself in the mirror and feeling any happy future crumbling away like the continental shelf.

I couldn’t dream that anything could get better.

Even as a young woman—with a trim little figure, contact lenses, behind-the-ear hearing aids—I couldn’t dream that anything had really changed. Nothing seemed to have changed the day I went in to be advised by my high school guidance counselor. I was a straight-A student and I’d gone in thinking he would advise me to apply for all those great universities he was urging my friends to attend. But when I opened the door he said instead, “Oh, you’re the one.” And handed me a brochure that read, errors and all: “Factory work make good job for deaf.”

All the negatives seemed to be the last word, seemed—like the fundamentals of my body, of my place in society as defined by that body—unchanging and unchangeable.

The same way my sweetie Donna and I couldn’t imagine that we’d ever be able to marry our fortunes together.

And yet here we are. Two women happily married. One of us a gleeful little cyborg.

The ADA and the World

I’m an American married to a Japanese citizen. We live in Japan with our teenaged twins, one of whom is multiply disabled. Our daughter, Lilia, is deaf and has cerebral palsy due to her extremely premature birth (at twenty-six weeks). She uses a wheelchair and communicates mostly via Japanese Sign Language and written Japanese. Although she doesn’t know English and has never lived in the United States, she and her brother have American passports. A couple of years ago, we visited Washington D.C. where they had a chance to learn more about their American heritage.

On our first morning in the city, we had a reservation for a tour of the Capitol building. After borrowing an audio-guide in Japanese for my husband, we took in the statues representing notable people from the history of various states in the Capitol Visitor Center. There was the golden-caped King Kamehameha I of Hawaii in bronze and North Dakota’s Sakakawea, the Shoshone woman who’d famously served as an interpreter for the explorers Lewis and Clark. 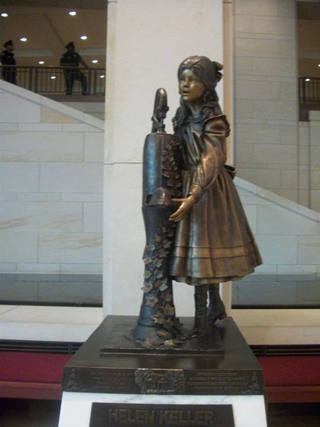 From across the room, Lilia beckoned to me.

“What?” I wagged my finger.

Although the label was in English, she’d recognized the figure of a girl standing by a water pump. Keller was from Alabama.

“Her reputation has suffered some because of her communist leanings,” a Visitors Center employee told me.

The Kinokuniya bookstore near our house had half a dozen biographies of Helen in stock at any given time. From these I’d learned that she’d made two trips to Japan. On the first, in 1937, she delivered a letter on behalf of President Roosevelt, reconfirming friendship between nations. On the second, in 1948, she visited Hiroshima and Nagasaki and spoke against the atomic bomb. She even acquired a dog from Japan—an Akita named Kamikaze-Go—after being inspired by the statue of the faithful Hachiko at Shibuya Station.

“Would you like an ASL interpreter for your daughter?” the employee asked.

“Oh, that would be great! But she only knows Japanese Sign Language…”

Although we often visited public spaces in Japan, no one had ever spontaneously offered interpretation to my daughter. Neither was sign language taught as a school subject as it is in the States.

I agreed that it was worth a try. She went to the front desk to inquire.

When the ASL interpreter, a middle-aged woman in a pantsuit, arrived, she introduced herself to Lilia via sign language. Lilia had no idea what she was communicating. In spite of what most people think, sign language is not universal. Signs vary even between English-speaking countries, and are often culturally specific. Many Japanese signs, for example, are based upon written ideograms.

“Thanks for trying,” I told the interpreter. “We’ll go it on our own.”

I handed Lilia the camera.

As the tour progressed, she took photos of the rotunda while I listened to our guide, collecting interesting facts to share with her later. I was surprised to learn, for example, that it was Abraham Lincoln who’d signed the charter for the first college for the deaf in the world, the National Deaf Mute College in Washington D.C., which is now called Gallaudet University.

I’d often heard the mothers at the School for the Deaf in our town in Shikoku fantasizing about sending their own children to Gallaudet one day to study. There is, as yet, no such university in Japan. 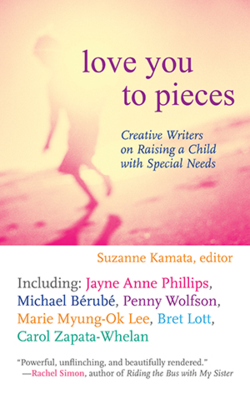 After our tour, my husband wanted to check out the food court at Penn Station, which had been recommended by a Japanese tourist guide. At the train station we found stairs leading to the first level where the restaurants were, but the elevator didn’t descend. “Maybe we can’t take the wheelchair down there,” I said with a sigh of resignation. Our family was all too accustomed to inaccessible spaces. The School for the Deaf that our daughter attended from kindergarten through junior high was three stories high, yet did not have an elevator.

A twenty-something man standing nearby overheard me. “Of course there’s a way to get down,” he piped up. “It’s the law!”

We eventually did find the elevator down a corridor a few yards away, and had our lunch in the basement. What lingers in my mind now is not the food we ate or even Penn Station itself, but the young man’s words: “It’s the law!”

Not so long ago, Americans in the U.S. with disabilities experienced the same struggles that my daughter has endured in Japan: the absence of ramps and elevators, difficulties in communication, and a lack of employment opportunities. Conditions are slowly improving in Japan, in part because Tokyo will host the Paralympics in 2020, but the standards for accessibility have largely been set by the United States and the Americans With Disabilities Act.

So thank you, Helen Keller for showing what is possible, and Abraham Lincoln for enabling Deaf education, and also Ted Kennedy and Justin Dart and Mary Lou Breslin and George H. W. Bush and all of the others who helped bring about the ADA. You are truly making the world a better, more accessible place.

Terry Galloway is the founder of the Actual Lives writing and performance programs; a founding member of Esther’s Follies, Austin, Texas’s legendary cabaret; and cofounder of the Mickee Faust Club in Tallahassee, Florida. She divides her time between Austin and Tallahassee. Follow her on Twitter at @TerryLGalloway.

Suzanne Kamata is fiction editor at the online magazine Literary Mama. Her essays, stories, and articles on parenting a disabled child—her daughter is deaf and has cerebral palsy—have appeared or will appear in Utne Reader; Brain, Child; Literary Mama: Reading for the Maternally Inclined; It's a Girl: Women Writers on Raising Daughters; and an anthology on new family configurations published by Riverhead in 2007. Her anthology The Broken Bridge: Fiction from Expatriates in Literary Japan was nominated for the Kiriyama Prize. Her work has been nominated five times for the Pushcart Prize, and her essay "The Sound and the Worry" was given a special mention in the latest Pushcart Prize anthology. Follow her on Twitter at @shikokusue.

Today Beacon Press takes part in the international conversation highlighting stories of people with disabilities. In honor of the twenty-fifth anniversary of the ADA, we present two disability stories: one from Terry Galloway, the other from Suzanne Kamata.

When I was deaf as a doornail, I suffered severe cell phone envy, which is far worse than penis envy because everyone’s got a cell phone.

Now I have a Bluetooth-enabled cochlear device that makes it seem as if the caller is speaking right inside my head.

It’s a little spooky because, growing up, I actually did hear voices speaking inside my head.

When I was nine, thank god, I was finally diagnosed as having—and I quote—“a chemical imbalance caused by the introduction of drugs to the fetal nervous system.” It was the aftereffects of those drugs that had set the nonexistent voices chattering and left my ears kaput.