An Appreciation of Ta-Nehisi Coates' Between the World and Me Last year my students—Chicago teachers and teachers-to-be, educators from a range of backgrounds and experiences and orientations—all read The Beautiful Struggle. I’d put Ta-Nehisi Coates’ memoir on the list of required readings because I thought it was a fitting and important educational book, a useful text for city teachers to explore and interrogate. Some students agreed; several did not. “What’s this got to do with teaching?”

I chose it because it moved me, frankly, and I thought it might move some of them as well. I chose it because in the details of this one life—the challenges and the obstacles, but especially the elements he assembled to build an architecture of survival—I saw human themes of love and beauty and the universal struggle to grow more fully into the light. I chose it because it took readers inside the life of one Black kid, this singular unruly spark of meaning-making energy negotiating and then mapping the territory between his home and the streets and the schools—necessary reading for city teachers I thought.

My students have all chosen to become teachers against a backdrop of corporate-driven school reform accompanied by unprecedented disrespect and hostility toward teachers and teaching. They know that teaching is devalued; they know they won’t earn either a lot of money or a fair share of respect; they’ve been told by family and friends that they could do much, much better. And still they come to teaching, most saying they want to make a difference in children’s lives. Some are motivated by memories of a wonderful teacher who’d reached and changed them, others by bitter experiences they hope to correct. They are mostly idealistic, and I admire them for that.

They bring to class a vague hope that they will do great things in spite of a system that they know to be corrupt and dysfunctional. But this knowledge is not yet deep enough, for they also accept—some with greater skepticism and some with hardly any doubts at all—the predatory system’s self-serving propaganda: test scores, achievement gaps, accountability, personal responsibility.

Into this contradiction steps Ta-Nehisi Coates with an assertion that shaped and marked the course: No matter what the professional talkers tell you, Coates wrote, I never met a black boy who wanted to fail. That simple observation—or was it an argument, a polemic, or an indictment?—led to hot debate on the evening we first opened the book, and those eighteen words were still roiling the seminar as the term came to an end.

Coates never lets up, and he returns again and again: Fuck what you have heard or what you have seen in your son. He may lie about homework and laugh when the teacher calls home. He may curse his teacher, propose arson for the whole public system. But inside is the same sense that was in me. None of us ever want to fail. None of us want to be unworthy, to not measure up.

Ta-Nehisi Coates’ new book, Between the World and Me, takes us deeper into life in schools, and especially what the experience means to its captives. I was a curious boy, Coates writes, but the schools were not concerned with curiosity. They were concerned with compliance.

That nails it: the obsessions that characterize American classrooms today—especially urban classrooms and schools attended by the poor, recent immigrants from impoverished countries, First Nations peoples, and the descendants of formerly enslaved people—are simple: the goal is obedience and conformity, the watchword, control. These schools are characterized by passivity and fatalism and infused with anti-intellectualism, dishonesty, and irrelevance. They turn on the little technologies of constraint, the elaborate schemes for managing the fearsome, potentially unruly mob, the knotted system of rules, the exhaustive machinery of schedules and clocks and surveillance, the laborious programs of regulating, indoctrinating, inspecting and punishing, disciplining, censuring, correcting, counting, appraising, assessing and judging, testing and grading. The corporate reformers offer no relief, and simply create charter or alternative schools that enact this whole agenda on steroids. They are not concerned with curiosity or imagination, initiative or courage because their purpose is elsewhere: everyone more or less submissively accepting their proper place in the hierarchy of winners and losers.

One night I opened seminar by telling the class that less than two miles from where we were meeting almost ten thousand Jewish women were housed in cages. It was an electrifying and terrifying image, and the class rose up, some convinced I was joking (though I wasn’t smiling) others that I was lying, all insisting that it couldn’t be true. I eventually relented—you’re right, I said, it’s not true. The truth is that ten thousand poor, mostly very young Black and Latino men are living in those cages. Everything calmed down; the normal world returned.

And we returned to Coates: the streets and the schools [were] arms of the same beast. One enjoyed the official power of the state [but] fear and violence were the weaponry of both. 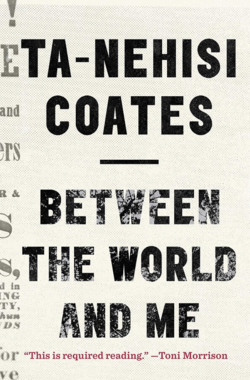 We had worked earlier to name the system, a system built on theft and lies and plundering Black bodies, Coates said. It was surely a predatory system, a racist system, and we looked hard at that word: racism. In one common context it meant ignorance and prejudice, the off-hand comments of Cliven Bundy or Donald Sterling, but there was more: there was the system itself, the plunder, the laws and structures, the schools. Donald Sterling’s filthy mind and mouth is one thing; that he became rich as a swindling slum-lord is something else.

“I’m no Donald Sterling,” people say, meaning I don’t utter the hateful words. But Coates won’t let anyone off the hook: the people who believe themselves to be white are obsessed with the politics of personal exoneration. Their privileges are earned—they are good and true folks all—or come from thin air; their comfortable lives as normal as noon coming around every 24 hours. James Baldwin decades ago accused his country and his countrymen of a monstrous crime against humanity, and added a further dimension to the indictment: it is not permissible that the authors of devastation should also be innocent. It is the innocence which constitutes the crime.

In 2008 a group in the Arizona legislature passed a law stating that schools whose curriculum and teaching “encourage dissent” from “American values” risked losing their state funding. American history is bursting with stories of dissent from the first revolutionaries onward: Abolitionists, Suffragettes, anarchists and labor pioneers, civil rights and Black Power warriors, peace and environmental activists, feminists, heroes and sheroes and queeroes, Wounded Knee, Occupy, Black Lives Matter! Wherever you look and whatever period you examine, dissent is as American as cherry pie, an apple-core American value and the very engine of hope or possibility—except to the lawmakers of Arizona.

A history teacher in a Southside Chicago school was teaching a standard lesson on the legendary 1954 Supreme Court case, Brown v. Board of Education. Brown reversed Plessy v. Ferguson and ended racial segregation in US schools, and the lesson was pointedly directed toward illustrating our great upward path as a nation. A student who had appeared to be paying no attention at all spoke up suddenly, challenging the teacher: “So you’re saying this class here is against the law? We’re breaking the law here? Can I call the cops?” Everyone cracked up, but the disruptive student was highlighting the obvious: here was a segregated classroom in a segregated school in a country that had outlawed school segregation decades ago.

There’s a genre of jokes that all end with the same punch-line: in one version, a man comes unannounced and unexpectedly upon his partner in the intimate embrace of another, and explodes in accusation. The accused looks up indignantly and says: “Who are you going to believe? Me, or your own lying eyes?” Kids get it viscerally: schools are asking them to ignore their immediate experiences and their direct interpretations—their own lying eyes. Who you going to believe?

Schools chug along on the rails of indoctrination and propaganda: everywhere you look and in every direction lies the hype of the curriculum and the disingenuous spin about young people. Students are routinely subjected to an alphabet soup of sticky, inaccurate labels, mistrusted and controlled, and defined as lacking the essential qualities that make one fully human. On a daily basis and as part of the normal routine, schools engage in the toxic habit of labelling students by their presumed deficits, and officially endorse failure—especially for children of the least powerful—in the name of responsibility and objectivity and consequences.

And everywhere you look and in spite of it all, youth are making their wobbly ways toward enlightenment and liberation, the twin pillars of an education of purpose. From Youth Speaks in Oakland to the Baltimore Algebra Project and the Chicago Freedom School, they are having their say and forging their unique pathways. And right next to them are wondrous teachers in countless spaces and places organizing small insurgencies and underground railroads, bursts of purpose and power growing through the cracks in the concrete. These are teachers whose faith in the young calls them to dive into the contradictions, to find ways through the mechanisms of control, to tell the truth when it must be told, and to take the side of the child.

Between the World and Me will be required reading for those teachers, and it will be on my syllabus in the Fall. Get ready.

William Ayers was Distinguished Professor of Education and Senior University Scholar at the University of Illinois at Chicago. He is the founder of the Small Schools Workshop and the Center for Youth and Society, and the author of many books including Teaching Toward Freedom, A Kind and Just Parent, Fugitive Days, and Public Enemy. Follow him on Twitter at @WilliamAyers.

An Appreciation of Ta-Nehisi Coates' Between the World and Me

Last year my students—Chicago teachers and teachers-to-be, educators from a range of backgrounds and experiences and orientations—all read The Beautiful Struggle. I’d put Ta-Nehisi Coates’ memoir on the list of required readings because I thought it was a fitting and important educational book, a useful text for city teachers to explore and interrogate. Some students agreed; several did not. “What’s this got to do with teaching?”

I chose it because it moved me, frankly, and I thought it might move some of them as well. I chose it because in the details of this one life—the challenges and the obstacles, but especially the elements he assembled to build an architecture of survival—I saw human themes of love and beauty and the universal struggle to grow more fully into the light. I chose it because it took readers inside the life of one Black kid, this singular unruly spark of meaning-making energy negotiating and then mapping the territory between his home and the streets and the schools—necessary reading for city teachers I thought.