Home About Beacon Press
Teaching the ABCs of Faith Traditions in an Age of Intolerance
Elegy for Rabbi Harold White, Interfaith Families Pioneer 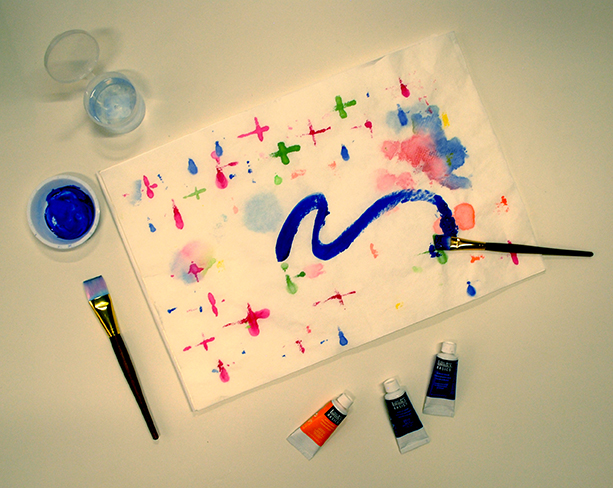 Working in the creative department at a small non-profit book publisher, we are constantly brainstorming new ideas of how to get our books noticed while not breaking the bank. Perhaps surprisingly, our limitations are sometimes what help elevate our designs to a higher standard. Our department is constantly brainstorming new ways to communicate our message through a combination of digital and physical media. I have had to rely on my abilities to illustrate, draw text, sculpt, paint, photograph, and collage on covers. My favorite covers have always resulted from some sort of experimentation with media and imagery. 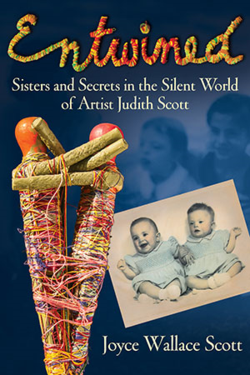 The memoir Entwined by Joyce Wallace Scott revolves around the author’s relationship with her twin sister, Judith Scott, who was a world-renowned fiber artist. The story is heart-wrenching and deeply personal, so I knew that I wanted the cover to reflect those qualities in the design.

We were lucky enough to receive some great photos from the author’s childhood along with Judith’s artwork. I knew these photos would work wonderfully for the cover but knew the cover needed another element to further the design.

The fiber art of Judith Scott is vibrant, complex, and tactile. I felt like the title also needed a tactile and “entwined” treatment. I started with hand drawn text, trying to use lines to create movement and a sense of connection. I thought I was getting closer with the hand drawn text, but didn’t feel like I was quite there. This is when I thought of using some of my own embroidery thread to create the word “entwined” and mimic the texture and colors of the artwork by Judith Scott.

The 3D “entwined” was a lot of fun to create. First, I took one of my handwritten titles and blew it up in Photoshop, printed it on our large format printer and backed with thin cardboard. I then cut out the cardboard letters and wrapped the letters with several colors of embroidery thread until the letters were covered. The final step was photographing the letters and tweaking them slightly in Photoshop. Note the color shift on “twin” within Entwined.

I love experimenting with text in general, but am particularly proud of how the title for Entwined evolved. Some of our other covers that have hand-created text include Rescuing Jesus by Deborah Jian Lee and The Drone Eats with Me by Atef Abu Saif. 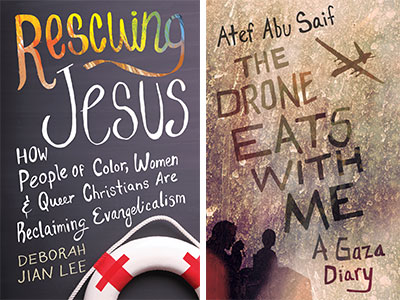 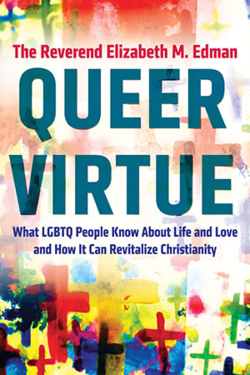 Queer Virtue by the Reverend Elizabeth M. Edman provided another set of interesting design challenges. The book called for a mostly text cover with some sort of imagery that was both Christian and queer without being too specific. Initially, I played with some imagery of rosary beads before the team here at Beacon decided that direction would be too specific to Catholicism.

Most of the comparable titles we discussed while brainstorming the Queer Virtue cover had abstract art on the cover, which I thought would work nicely. The abstract imagery on the cover needed to be colorful and eye-catching.

While brainstorming art techniques for the cover, I remembered an accidental technique I created back in college using layers of paint and Sumi-E Painting Sketch Paper. The Sumi-E paper is generally used for india ink calligraphy and line drawing but can also work nicely for layering colors and playing with translucency.

I experimented a lot with this cover. Painting on the Sumi-E paper with watered down acrylic paints, I was able to create layers of colorful paper that I collaged on top of each other. I began with more abstract colors and eventually started painting crosses to signify Christianity.

Once I had my pieces of art ready, I booked a conference room for a photo shoot. There I secured the art pieces on a window, turned off the conference room lights, and photographed the art with light from the hallway shining through the window and artwork. This lighting effect gave the art the vibrancy of a stained glass window. 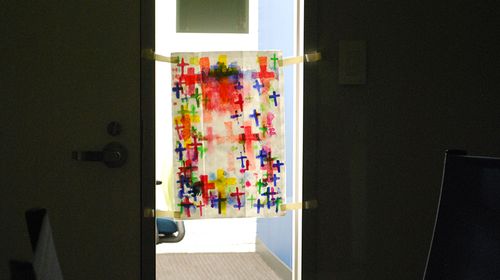 Some of our other titles that have Beacon-created art include, Putting God Second by Rabbi Donniel Hartman, Being Both by Susan Katz-Miller, and Tweet Land of Liberty by Elinor Lipman. 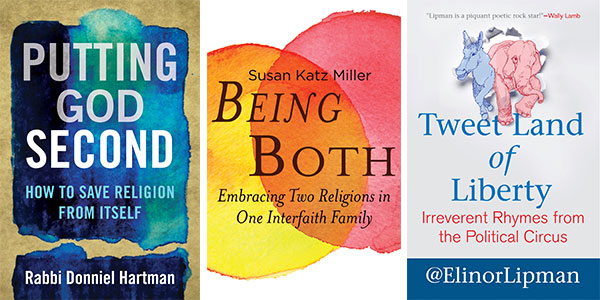 The cover of For White Folks who Teach in the Hood…and the Rest of Ya’ll Too by Christopher Emdin focuses on sneaker culture and illustrates the divide between some teachers in urban areas and their students. This cover concept was inspired by a specific story in the book where a teacher’s lack of understanding of her students is illustrated by her attitude towards their shoes. Visually, I thought this “shoe divide” would be a fun concept to play with.

Surprisingly, it was very difficult to find images that would work with this concept. Sure, I found images of sneakers but they were often dirty, worn out, or outdated. Christopher emphasized to us how important it was for the sneakers to be clean and well kept. After many hours of research, only finding photos of worn out and dirty shoes, it was time to think of a new approach.

This is when I decided to recruit some very generous colleagues who took time from their busy schedules to become foot models for a day. My colleagues brought in their best sneakers, I put together a last minute green screen, and we had a photo shoot. The colors, textures, and variety in the sneakers were better than I could have imagined, thanks to the help of fellow Beacon staff. 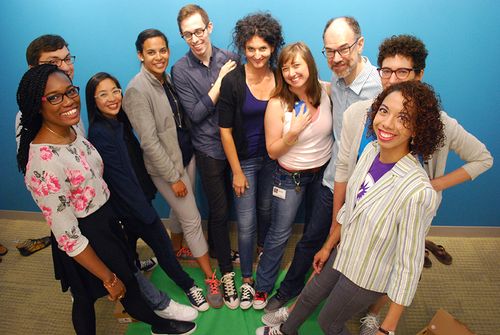 When I can’t find the correct imagery online, it’s great to be able to photograph my own covers. Another cover we recently photographed in house includes Faith Ed. by Linda K. Wertheimer. 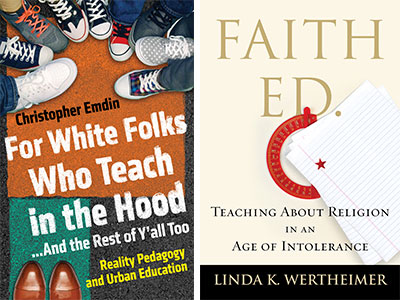 Throughout my time at Beacon Press, I have learned that creating my own images and text for covers is sometimes the best solution. I feel lucky to have designed covers for a wide range of topics. Each Beacon title presented a unique challenge to help elevate the book from initial idea to an eye-catching book worth picking up.

Gabi designed her first book cover at the age of six for her self-published book following a three-eyed alien family living on Mars. Ever since then she has immersed herself in the world of art and design. Gabi joined Beacon Press in 2011 after graduating from the Rhode Island School of Design. She is now the visual designer for an apparel start up in San Francisco. Follow her on Twitter at @gabi_studio.

Working in the creative department at a small non-profit book publisher, we are constantly brainstorming new ideas of how to get our books noticed while not breaking the bank. Perhaps surprisingly, our limitations are sometimes what help elevate our designs to a higher standard. Our department is constantly brainstorming new ways to communicate our message through a combination of digital and physical media. I have had to rely on my abilities to illustrate, draw text, sculpt, paint, photograph, and collage on covers. My favorite covers have always resulted from some sort of experimentation with media and imagery.