Home About Beacon Press
Striking Down the Nostalgia for Mammy: Black Women and Labor Activism
Tales of the Unexpected

Today marks the tenth anniversary of the Danziger Bridge shootings. Ronnie Greene’s Shots on the Bridge was released on the same day the 5th U.S. Circuit Court of Appeals reaffirmed an order granting the officers a new trial based on misconduct by prosecutors that judges said tainted the officers’ trial back in 2011. Ten years after the shots on the bridge, the four surviving victims are still waiting for legal resolution. This excerpt from Greene’s book takes us back to that fateful day in 2005 when the officers appeared on the bridge for an unrelated distress call. In Greene’s vivid prose, the scene reads like something out of a movie. 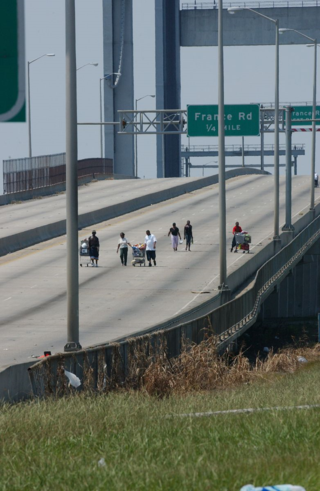 At the Crystal Palace, rage and fear suddenly mix like a bomb. Over the police radio, the 108 call registers. “Officer’s life in danger! Shots being fired!”

Officers sprint to a behemoth Budget rental truck commandeered after the storm, pile in, and race to the Danziger Bridge, the scene of the reported shooting. They grip police issued Glocks and their own personal weaponry: AK-47s, pump-action shotguns, an M4 high-powered rifle. The truck driver, Michael Hunter, has his thirty-inch assault rifle at the ready. Kenneth Bowen sits beside him in the passenger seat, and nine other officers scramble to the cargo area in back, holding steady as the truck rumbles forth. The back doors swing open, allowing the officers in back to see the hurricane-ravaged buildings they pass, but not what’s ahead. The officers barely speak, the truck’s gears grinding over pavement as it speeds the 3.3 miles separating the Palace from the bridge, busting through intersections where lights don’t work and spinning past Lucky’s Lounge, Jack’s Motel, and Dollar Store.

Steering with his right hand, the ex-marine leans out the window and fires a handgun with his left toward a pack of people he glimpses ahead, gathered at the foot of the bridge. The truck screeches to a halt, sending some in back tumbling over, and officers pour out. They say nothing. One, Anthony Villavaso II, rips nine shots from his AK-47. Pop, pop, pop, pop, pop, pop, pop, pop, pop. Officer Faulcon hits the ground, pumps his shotgun, then fires. He pumps again, then fires. He pumps a third time, and fires. And then a fourth pump, and fire. Police aim for backs, arms, necks, legs, feet, heads, and stomachs of two groups of people now diving over a concrete railing or scattering atop the bridge. One officer aims his pistol at the back of a slight figure sprinting away from the bridge, and pulls the trigger twice. Another points his rifle toward two men trying to race up and over the bridge for cover, and fires. The cacophony is so deafening the truck’s driver has to flap his arms, using a command he learned in the marines. “Cease fire!”

When the shooting stops, seventeen-year-old James Brissette Jr. is dead, bullets riddling his nearly six-foot, 130-pound body from the heel of his foot to the top of his head. Susan Bartholomew is trying to crawl on the pavement, her right arm dangling by a thread. Her daughter’s stomach is shredded by a bullet. Her husband’s head is pierced by shrapnel. Her nephew Jose is shot in the neck, jaw, stomach, elbow, and hand. A paramedic arriving soon after says not to bother with him; the teen is too far gone. “Don’t give up on me,” Jose Holmes Jr. pleads. Ronald Madison is slumped over the pavement, the back of his white shirt turned red, with seven gunshot wounds in his back. As Madison wheezes his final breaths, federal authorities will later say, Hunter watches former supervisor Bowen storm to Madison, yell, “Is this one of them?” and stomp on his back, leaving a boot print upon the slight figure sprawled in pools of blood.

Like every one of the victims, he is black, and unarmed.

In just moments, before police gather a single piece of evidence or question a single potential witness, with blood and bodies splayed around them, the NOPD officers and brass standing atop the Danziger Bridge will decide that the people they just fired upon, two lying dead and four maimed, are criminals. A well-regarded white police lieutenant, his square jaw the visage of a tough cop, arrives at the bridge moments after the gunfire quells and takes in the scene. Lieutenant Michael Lohman sees no guns by the dead teen and wounded family on one side of the bridge. He sees no gun by the forty-year-old slumped over on the other side of the expanse. The cop’s cop makes a choice. “I knew this was a bullshit story, but I went along with it,” he will later admit. So did his colleagues, the men who shot at the people on the bridge and the supervisors who were supposed to ferret out the truth. In the coming days and months, police will plant a phony gun, invent witnesses, craft fictional reports, and launch a public relations campaign portraying the officers as heroes infused with bravery amid the horrors wrought by a hurricane. Behind the scenes, a racial divide is exposed within the ranks. When a group of white sergeants and lieutenant begin putting their tale on paper, they initially report that only the black officers struck the victims with bullets atop the Danziger Bridge, separating the white officers from the bloodshed. Another fiction.

For a decade the families of the victims will press for truth, pierce the police façade, and uncover the lies buried with their kin. Justice for these families will not come swiftly or kindly after the shots on the bridge.

Ronnie Greene is an investigative journalist for the Associated Press who teaches graduate writing at Johns Hopkins University. Before joining AP, he edited a 2014 Pulitzer Prize–winning investigation for the Center for Public Integrity. Greene spent much of his career at the Miami Herald, and he is author of Night Fire: Big Oil, Poison Air, and Margie Richard’s Fight to Save Her Town. Shots on the Bridge is his second book.

Today marks the tenth anniversary of the Danziger Bridge shootings. Ronnie Greene’s Shots on the Bridge was released on the same day the 5th U.S. Circuit Court of Appeals reaffirmed an order granting the officers a new trial based on misconduct by prosecutors that judges said tainted the officers’ trial back in 2011. Ten years after the shots on the bridge, the four surviving victims are still waiting for legal resolution. This excerpt from Greene’s book takes us back to that fateful day in 2005 when the officers appeared on the bridge for an unrelated distress call. In Greene’s vivid prose, the scene reads like something out of a movie.