Home About Beacon Press
Siempre Luchando: Mothers and Their Children Under Fire in Detention Centers
Mixed Media in Book Design 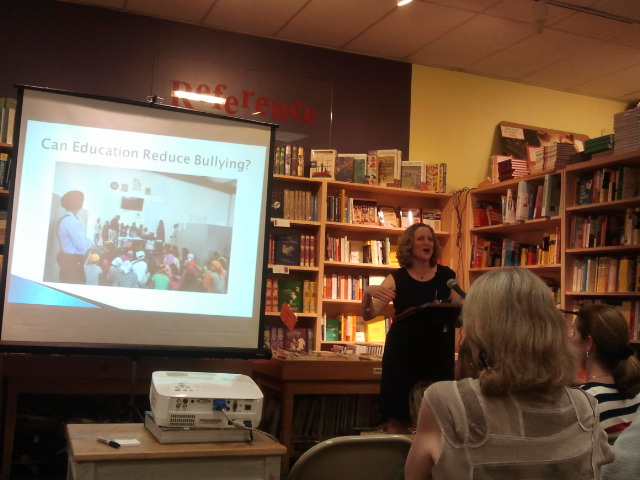 Linda K. Wertheimer had a fabulous book launch at Porter Square Books in Cambridge, Massachusetts last month. In her presentation, she talked with us about the classrooms she visited throughout the US to write Faith Ed. The ones in Wellesley, Massachusetts and Modesto, California stood out. Teachers in Wellesley spend half the school year teaching the world’s religions to sixth graders. High school students in Modesto take a world religions class in order to graduate. You can watch her full presentation here to hear more about her travels and the current state of fostering religious literacy in today’s youth. Here are some highlight questions from the Q&A session that followed.

Do any of the classes talk about people who don’t believe in religion?

Yes, they do. Do they talk about that a lot? No. I remember seeing an example in Modesto of a case about a girl who was atheist, who objected to the prayer banner in her high school. I sat at the beginning of the world’s religion class in Modesto, and as a part of that, they do define what atheism is and what agnosticism is. And in Wellesley, too, they’ve talked about that. In the first-grade classes that I went to, I don’t know if they got into that as much.

I think that is sort of the next frontier. And given that an increasing amount of Americans are identifying as ‘nones’—people who don’t believe in any religion—I think it’s something schools are going to need to grapple with. How can we include that more when we’re doing these classes about religion? Is secular humanism a religion? These are questions that, particularly at the high-school level, you could talk about.

In Texas, Christianity is still kept up front and center in many of the schools. Have these schools been able to be objective and teach about many religious without putting a value on it?

The teachers that I’ve seen are, for the most part, doing that. (I didn’t see every teacher in the country.) In an op-ed that I wrote, there’s an example of a teacher in Waterloo, Iowa who hung a Jesus sign above her classroom. There are still violations of separation of church and state, and they’ll always happen. The people who are teaching about religion, for the most part, are trying to keep their own beliefs out of it. An interesting thing that I found, though, is that there doesn’t seem to be a uniform policy on how to deal with it. Some teachers, for example, are very open about their beliefs. Some teachers pride themselves on never saying what they are, and then they make a game of it and have teachers guess what they are at the end, because they really don’t want to show any bias.

This issue comes up big time in the “How Young Is Too Young?” chapter of my book. Those teachers, unlike middle-school teachers and high-school teachers, don’t really take a lot of classes about religion in college. A lot of them were thrown into this and they don’t get any training on how to teach about religion. Wichita, Kansas, for example, is a part of the Bible belt, so there are teachers who still want to celebrate Christmas in the classroom and still want to do celebration versus education and the principals are saying, “No, you can’t do that.” I think we are so much better than we were in the 1970s, when the Church Lady came to my classroom, but we still have a ways to go. 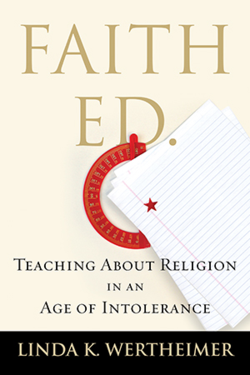 Are the children who believe their faith is the only true faith respected in these classes?

Teachers do not out anyone. Unless that student self-identifies themselves, no one has any idea of knowing that they feel that way. At the middle-school and high-school level, the teachers are pretty good about coaching on how you talk about religion without offending each other. I’ve also noticed teachers stepping in if they think a conversation is going in a bad direction. But a lot of students keep that to themselves. They don’t necessarily reveal how religious they are. It may have been in Modesto where there were some students who said it wasn’t cool to be too religious, so they don’t wear it on their sleeve. It depends on where they are, too. Things vary widely by community.

Did you get a sense of how this type of education is growing? Is this something you see as becoming more standard in the future?

One of the main reasons why I wrote the book is because I don’t think it’s growing enough. I interviewed a number of education researchers who’ve studied this much longer than I have. One of them described it to me as a free-for-all movement. You have Tony Blair—I don’t think I even mention him in the book—with the Face to Faith Foundation, these virtual meetups with kids. It’s a great program, but it’s not a curriculum. It’s sort of an extra. And then you have Modest, CA, and Modesto has been trying for years. Modesto’s thought was: Other people will replicate us. And it was only last year that the state legislature passed a resolution saying this is a great model. But I don’t think there’s any rush to replicate it.

The big point in the book is that we need to do more. We need to have a conversation about this, because there are some really wonderful examples out there. There’s not enough of it. There’s more of a need now to do more. We’re certainly doing more now than we did in the 70s, in the 80s. A lot of these things I talk about only came about in the late 90s and 2000s. So in that respect, yes, there is more now than we had in the past. But it’s still kind of scattershot. There’s no one at the education department levels, states or national, saying we really need to address this. I will add, though, that in the late 90s and early 2000s, as part of state standards, most states said: “When we are teaching about world history and geography, we need to teach about the world’s religions.” But that’s not the same thing as what I really saw in Wellesley and Modesto.

Linda K. Wertheimer is an award-winning education writer and essayist. She was previously the education editor of the Boston Globe and a reporter at the Dallas Morning News and Orlando Sentinel. Her work has appeared in numerous publications, including Writer, the Atlantic online, Tiferet, Moment, and the Boston Globe Magazine. A graduate of Northwestern’s Medill School of Journalism, she lives in Lexington, Massachusetts. Follow her on Twitter at @Lindakwert.

Linda K. Wertheimer had a fabulous book launch at Porter Square Books in Cambridge, Massachusetts last month. In her presentation, she talked with us about the classrooms she visited throughout the US to write Faith Ed. The ones in Wellesley, Massachusetts and Modesto, California stood out. Teachers in Wellesley spend half the school year teaching the world’s religions to sixth graders. High school students in Modesto take a world religions class in order to graduate. You can watch her full presentation here to hear more about her travels and the current state of fostering religious literacy in today’s youth. Here are some highlight questions from the Q&A session that followed.