Surfing and Indigeneity in the United States 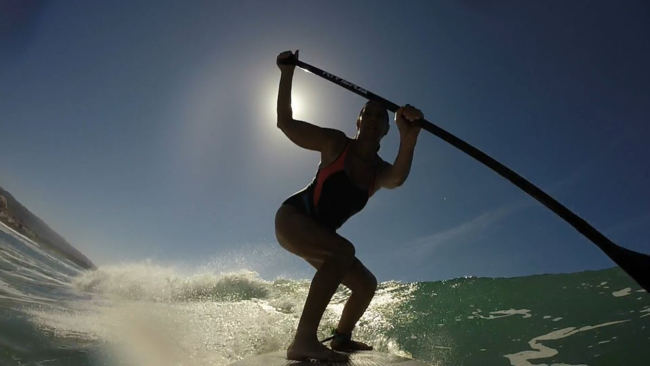 At first glance, using the terms surfing and indigeneity (as in “Indigenous”) in the same sentence may seem like a non-sequitur, something that doesn’t connect or make sense. Yes, it makes sense in the context of Hawaii given that the modern sport of surfing as we know it emerges out of Native Hawaiian culture. But what does surfing have to do with American Indians? Quite a bit as it turns out, based on research and writing I’ve been doing for several years now.

There is almost nothing that can be written about with regard to American culture that can’t be linked in one way or another to Native Americans, especially if seen through the lens of settler colonialism. Simply stated, the historical processes of settler colonialism create the conditions of possibility for everything in the sociopolitical arenas of the U.S. to exist, even something as seemingly insignificant as the sport of surfing and the culture that surrounds it.

I was recently a featured speaker at the second annual Institute for Women Surfers. IWS “is a grassroots educational initiative in the Public Humanities that brings together women surfers, activists, artists, business owners, and educators, to create spaces of peer teaching, learning, and mutual aid.” IWS is part of a larger movement within surf culture that seeks to understand the broader sociopolitical implications of surf culture in the U.S. and the world more broadly. The movement has even found its way into academia in recent years and is generally referred to as critical surf studies.

My work in the areas of Native American studies and surf culture is a natural outgrowth of my American Indian identity (Colville Confederated Tribes but born and raised in Los Angeles) and the fact that I am a female surfer. Intersecting the two seemingly disparate arenas began when I was a graduate student and wrote a Master’s thesis that examined the role of an American Indian community in a campaign to preserve the world-famous surf break known as Trestles, in San Clemente, California. Since then, as a journalist I have written numerous articles about surfing history and indigeneity (one of which garnered a journalism award from the Native American Journalists Association in 2015). Surfing and indigeneity is also a topic of a future book project. 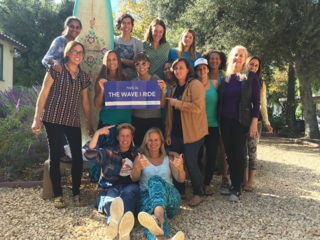 Institute for Women Surfers, November 8, 2015. Gilio-Whitaker is holding up the sign on the left side.

In my presentation at IWS—titled “UnErasing the Native in Surfing and Sustainability”—I gave a brief lesson on settler colonialism and indigenous erasure in Southern California, and recounted the history of the Save Trestles campaign. But the most powerful aspect of the presentation was a workshop I created that was designed to reveal the ways surf culture enacts the structures that we think about as settler colonialism and infuses the subculture with narratives of domination, privilege, and entitlement.

All of the Institute participants were women surfers (at least half of them are women of color) with high levels of social consciousness and education, and all of them understand the basic tenets of feminism, heteronormative patriarchy, and critical race perspectives. So it wasn’t too much of a stretch for them to think within even bigger frameworks of colonial histories and grasp how colonial narratives have resulted in pervasive stereotypes and myths about Native American people, and more importantly how the discursive erasure of Native people from beach landscapes enables the existence of surf culture.

The workshop brought into conversation several seemingly unrelated topics: American origin narratives, sustainability, Indians, localism, and surf travel. By identifying the three most pervasive “facts” of each topic certain themes emerged. It was eye-opening, for example, for them to see how paradigms of conquest and entitlement are woven into narratives of surf travel. Or how attitudes of domination, superiority, privilege, and exceptionalism fuel the violence of localism in neighborhood surf breaks.

In addition to the two and a half days of serious discussion, we also had the chance to share the joy of surfing together, which is, after all, why we surf to begin with. Surfers know the power of surfing to transform lives. Surfing has also, on the other hand, had profoundly negative impacts on cultures throughout the world. But it is conversations like these that are helping to make surfing and surf culture a site for social good and ideally, transformation at the collective level.

Dina Gilio-Whitaker (Colville Confederated Tribes) is an independent writer and researcher in Indigenous studies, having earned a bachelor’s degree in Native American Studies and a master’s degree in American Studies from the University of New Mexico, and also holds the position of research associate and associate scholar at the Center for World Indigenous Studies. Her work focuses on issues related to Indigenous nationalism, self-determination, and environmental justice, and more recently the emerging field of critical surf studies. She is a co-author (with Roxanne Dunbar-Ortiz) of the forthcoming book from Beacon Press, ‘All the Real Indians Died Off’ and 20 Other Myths about Native Americans. An award-winning journalist, she is a frequent contributor to Indian Country Today Media Network and Native Peoples Magazine.

Posted at 03:33 PM in All the Real Indians Died Off, American Society, Dina Gilio-Whitaker, Feminism, Gender, and Sexuality, Race and Ethnicity in America | Permalink | Comments (0)

Surfing and Indigeneity in the United States

At first glance, using the terms surfing and indigeneity (as in “Indigenous”) in the same sentence may seem like a non-sequitur, something that doesn’t connect or make sense. Yes, it makes sense in the context of Hawaii given that the modern sport of surfing as we know it emerges out of Native Hawaiian culture. But what does surfing have to do with American Indians? Quite a bit as it turns out, based on research and writing I’ve been doing for several years now.