Home About Beacon Press
What the Friedrichs Case Was Really About
Before and After Sandra Bland: Centering Black Women’s Experiences with Police Violence 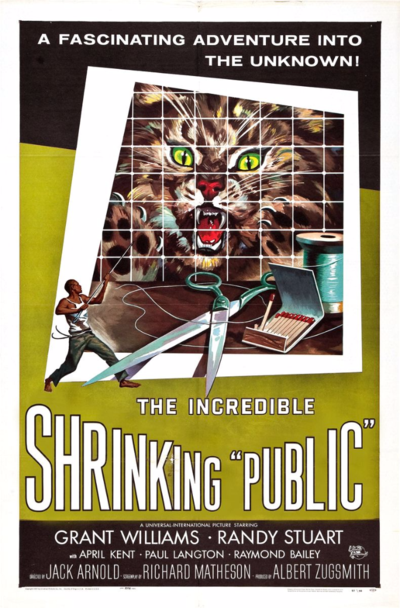 I admit it. I love pulp fiction, old school sci-fi, B-movies, and the dreadful dilemmas their protagonists face. From a safe viewing/reading distance, that is. When it’s happening to somebody else who doesn’t really exist.

The story follows likeable Scott Carey who, while on a yacht off the California coast, encounters a strange miasma. It touches him, but his wife, Louise, below deck as it passes, is not affected. In time, he notices that he’s losing weight and even becoming smaller. His clothing increasingly is too loose, too long.

At first, Louise and his doctor dismiss his growing alarm. The proof, however, is in the x-rays. Talk about lousy luck. Scott is shrinking, but that miasma—a radioactive mist, it turns out—is just one of his problems. He’s also been exposed to a large dose of insecticide, and the combination one-two punch is playing havoc with his entire molecular structure.

The more he shrinks, the worse life gets. He can’t keep his job, he can’t drive, he snaps at Louise; the size of furniture is a problem. Before you know it, he’s just inches tall, lives in a dollhouse, and his own cat is trying to kill him. And that’s before he ends up in the basement where the the ratio of spider to human size is terrifying.

When you’re that tiny, rendered that insignificant, nobody hears you scream.

It’s that way in real life, too.

Matheson’s Shrinking Man is an apt metaphor for the current moment in American politics and economic life. The lives and well-being of countless individuals, families, households, and communities are shrinking; the situation is particularly dire for those who already bear the brunt of structural racism, gender violence, and economic violence. The very concept of the Public Good is shrinking, and without intervention, it will vanish into oblivion.

The Public Good is shorthand, here, for an array of publicly held civic, economic, and ecological goods, and resources necessary to sustain a decent and fulfilling life without hardship. They include public education, public libraries, health care and social supports necessary to participate in civic life, disability accommodations and economic supports, affordable housing, healthy and sustainably produced food, and good jobs with decent wages and working conditions.

Other elements include public transit, safe and adequate utilities infrastructure, and ready access to communications technologies. It includes clean air and water, ecological and geological integrity regarding land use, and commitment to public spaces, parks and other federal lands, and wild places.

Almost every element of the Public Good is in now in some stage of erasure or proposed diminution. If it is not being actually destroyed or dismantled, it is being transferred from public stewardship to profit-producing, “market-based” substitutes that have no meaningful accountability to the public. In some cases, public cuts merely shift money to bolster already bloated budgets for militarism, policing, and “corrections.”

We face formidable challenges, certainly. But to suggest, as many politicians and business leaders do, that these shifts are inevitable and wholly irreversible in a global economy is to limit public imagination and possibilities for collective human agency.

Revenge of the “Deserving Rich”

Since the 1970s, the geopolitical landscape has been increasingly reshaped not only by the right, but also by neoliberalism, which draws support from many Democrats who often characterize themselves as centrists or moderates. Neoliberals may well be liberal (to varying degrees) on some matters of rights and recognition—LGBT inclusion, for example, and women’s reproductive choice. But as always: follow the money.

Neoliberal policies promote financial austerity for the many, cutbacks in and privatization of once-public services and resources, deregulation of public and private institutions, unregulated markets, lower taxes for the wealthy and corporations, and the unimpeded global movement of money and resources. This produces a massive upward distribution of power, resources, influence, income, and wealth. “Market-based solutions” are the engine of progress.

Austerity is required, we are told, because we have been irresponsible spendthrifts, addicted to “free stuff” and luxuries we can’t afford and don’t deserve (food, health care, education, housing, Social Security, Medicare, Medicaid, Americans with Disabilities Act accommodations, retirement pensions, and the like). In return for draconian cuts in public services and accountability, we can select our own futures from an ever-expanding array of consumer choices—or at least the ones we can afford on dwindling incomes.

This is a confidence game enacted on a massive scale. Writer and activist Yasmin Nair describes it this way:

…neoliberalism engages in a classic bait and switch: the choice is not a choice but a demand. You have no choice but to choose. In education, for instance, neoliberalism first decimates public schools, then installs charter schools as the only alternatives, then convinces parents in those decimated neighbourhoods that choosing charters is a right. You have no choice but to choose, and the choices are always tilted in favour of the entity that most profits from your “choice.”

Neoliberalism is the fiscal embodiment of “We had to destroy the village in order to save it.” It creates a manufactured crisis in order to provide a disingenuous solution. As journalist and activist Maya Schenwar points out, the real issue is how to establish a different set of public priorities and mobilize the civic will to sustain them.

Simplistic notions of guilt and innocence play a major role in discouraging people from accepting greater responsibility for the mess we’re in. So does neoliberalism’s central message: “You’re on your own. Good luck. Don’t write.” In a sense, this reinforces the erasure of the public itself. Everyone’s an individual; there is no “we” beyond identity groups.

It’s tempting to blame it all on the evil machinations of a few, but the Incredible Shrinking Public Good doesn’t just result from the actions of the villainous them. We and some of our favorite political, civic, and religious leaders are also complicit, by intention, tacit acceptance, or denial. But what if we were to decide that whether or not we bear any individual responsibility for creating the original problem, we nonetheless are willing to accept collectively responsible for solving it?

What if we decided to openly reject existing right-wing and neoliberal terms of discourse and debate, freeing ourselves from the constraints they place on our ability to imagine and strategize about new ways forward?

Richard Matheson’s story again proves instructive. Pushed to the limits of survival and unable to change what is happening to him, the Shrinking Man moves through abject terror into a new sense of his own significance and agency. Scott Carey finally grasps that his existence is meaningful; his life has always mattered. He suddenly realizes that he is part of something greater than himself. However minuscule he becomes, he will not erase himself.

The Shrinking Man begins to see the world, indeed the universe, in an entirely new way. On the brink of despair, he does not capitulate. However long or short the remainder of his life may be, he will not live it as a victim.

Collectively, we can do the same. And, unlike the Shrinking Man, ours need not be a solitary journey.

Imagine increasing the numbers of people who insist on different priorities. Imagine recognizing our individual and collective significance and agency.

Imagine working on specific issues in ways that also frame them within a larger vision of the Public Good. Imagine supporting one another across issues and communities in giving voice to robust new public commitments.

Imagine that, in this way, a new kind of alchemy is realized: the Public Good is no longer shrinking.

To the contrary. It is expanding.

Kay Whitlock is a writer and activist who has been involved with racial, gender, queer, and economic justice movements since 1968. She is coauthor of Considering Hate: Violence, Goodness, and Justice in American Culture and Politics with Michael Bronski, the award-winning Queer (In)Justice: The Criminalization of LGBT People in the United States with Joey L. Mogul and Andrea J. Ritchie, and cofounder and contributing editor for the weekly Criminal Injustice series at CriticalMassProgress.com. She lives in Missoula, Montana. Follow her on Twitter at @KayJWhitlock.

I admit it. I love pulp fiction, old school sci-fi, B-movies, and the dreadful dilemmas their protagonists face. From a safe viewing/reading distance, that is. When it’s happening to somebody else who doesn’t really exist.

The story follows likeable Scott Carey who, while on a yacht off the California coast, encounters a strange miasma. It touches him, but his wife, Louise, below deck as it passes, is not affected. In time, he notices that he’s losing weight and even becoming smaller. His clothing increasingly is too loose, too long.