By Donald Collins | Transgender Day of Remembrance (TDOR), observed on November 20th, was started by writer and LGBTQ pioneer Gwendolyn Ann Smith in 1998, after the death of Rita Hester. Hester was a black trans woman, living and working in the Allston neighborhood of Boston. She was found brutally stabbed in her apartment two days before her thirty-fifth birthday, and died on the way to the hospital. Her killer(s) were never caught. Read more →

By Eileen Truax | “Numbers are not looking well.” This was the welcome phrase that I got just a minute after I arrived to the Election Night Watch Party organized by a group of academics in Downtown Los Angeles. Electoral results were falling state by state, and the evidence started appearing before our eyes: Donald Trump, a man who verbally attacked Mexicans, immigrants, Muslims, journalists, women; the one who promised to build a wall in the border and to deport eleven million undocumented immigrants, was about to become President Elect. Read more →

On November 3, 2016, more than 500 clergy from many faith traditions gathered at Standing Rock in support of the Sioux Nation’s protest of the Dakota Access Pipeline. As part of the day of witness, Unitarian Universalist Association (UUA) President Rev. Peter Morales was one of seven denominational leaders who read statements repudiating the 1493 Doctrine of Discovery, a papal bull which offered the rationale for the colonization of the Americas and other countries by European Christian powers. By virtue of the Doctrine, Christians were given the legal right to take, colonize, settle, and extract resources from land belonging to those who were not Christian. The statement Morales read, adopted by the UUA General Assembly, called for Unitarian Universalists to learn about the doctrine and its ongoing impacts, not only on indigenous peoples, but on the political, legal, economic, and cultural systems in the United States, in local communities, and in our congregations. Read more →

Posted at 10:58 AM in All the Real Indians Died Off, American Society, An Indigenous Peoples’ History of the United States, Dina Gilio-Whitaker, History, Politics and Current Events, Roxanne Dunbar-Ortiz | Permalink | Comments (0)

I don’t know how to talk to my parents these days. Mami didn’t vote for Trump, but when I told her my outrage the day after the election, she said, “The man hasn’t even taken office yet. Let him take office.” I initially took her defense to mean that like my father, she had voted for Cheetoh, since she usually follows Papi’s lead. Read more →

Posted at 12:33 PM in A Cup of Water Under My Bed, American Society, Biography and Memoir, Daisy Hernández, Feminism, Gender, and Sexuality, Literature and the Arts, Now More Than Ever, Politics and Current Events, Queer Perspectives | Permalink | Comments (0)

It’s much harder to admit to playing in one’s own dark gardens of fear. Read more →

Posted at 01:01 PM in American Society, Considering Hate, Kay Whitlock, Literature and the Arts, Now More Than Ever | Permalink | Comments (0)

Early Wednesday morning, after running a controversial campaign that was even endorsed by the KKK, Donald J. Trump thanked his supporters for victory and promised to be a president for all Americans. A shock to almost every pollster and political pundit, his victory has been heralded as an unprecedented political upheaval. But the reactionary wave that swept across America this past Tuesday is not an anomaly in our history. It is, instead, an all too familiar pattern in the long struggle for American reconstruction. Read more →

Deep, authentic relationships with people we’ve been raised to see as “other” are key to understanding and reversing the impacts of racism and other forms of intolerance and inequity, and the misuse of power, and privilege. For the two of us, there is solace in knowing that someone shares our beliefs and commitment to social justice. We have built a friendship over the years that helps sustain us. We can talk with and lean on each other in times of madness and sadness, as we did on election night and surely in days to come. Read more →

Posted at 11:32 AM in Activism, American Society, Gather at the Table, Now More Than Ever, Politics and Current Events, Race and Ethnicity in America, Sharon Leslie Morgan, Tom DeWolf | Permalink | Comments (0)

In honor of the word “Awareness” in Transgender Awareness Week, I urge parents in conflict with their trans teen or college student to try their hand at penning an authentic personal essay about how you feel about what’s going on. Pick a specific topic—such as “name change”—and then ask your child to pen his/her/it/they own essay as well. Read more →

Posted at 11:12 AM in At the Broken Places, Biography and Memoir, Mary Collins, Queer Perspectives | Permalink | Comments (0)

Already an avid reader, TV watcher, and moviegoer, I fell easily into the gravitational pull of the Fearful Darkness through story. Sure, it was scary—but also a huge relief. Tales from the astonishing imaginations of Shelley, Wells, Stoker, Poe, Conrad, Conan Doyle, Bradbury, and Jackson, and movies like The Bad Seed and Invasion of the Body Snatchers provided emotional recompense for my fears without actually exposing me to danger. But more than that, hinting at intricate, multilayered understandings of reality, these stories produced fantastical images and symbols that struck a nerve, even if I didn’t fully understand them. I know now that it was never terror I yearned for so much as truth, no matter how slant it was served up. Read more →

It should be a shock that those who enthusiastically claim the mantle of Christianity would reject peace as part of a knee-jerk hatred of LGBTQ people. The degree to which this is an affront to Christian mission cannot be overstated. Yet this is fully and completely the “fruit of the spirit” of queerphobic proclamation. It gestures powerfully toward the theological and ethical vacuousness of such teachings and goes a long way toward explaining the crisis in credibility that plagues the contemporary church. Read more →

A Q&A with Mary Frances Berry | Donald Trump is emphasizing the possibility of voter fraud because if he loses he may want to challenge the election. The most obvious way to do that is to charge fraud. The conventional wisdom that there is little or no voter fraud is not quite accurate. While there is little in-person fraud that can be prevented with ID laws, the more pervasive fraud involves misuse of ballots and other kinds of vote-buying. This is what I call suppression of voter choice on the cheap. Studies and news accounts usually examine only the lack of a large number of prosecutions. The problem is that in most cases of vote buying, local prosecutors refuse to prosecute mainly, I believe, because buying votes is common, and indeed, they themselves—as well as local judges—may have bought votes to get elected. In a close count of electoral votes, this type of fraud in one state could make a difference. Read more →

I’ve had a connection to Beacon since college—one of my professors assigned Kindred for class! One of my final courses at Emerson College was a publicity class and I had to interview someone for a paper. I interviewed Beacon author Linda K. Wertheimer, author of Faith Ed and an instructor at GrubStreet, where I was working at the time. Soon after, a position opened up in the publicity department and I quickly applied. Getting to meet one of our authors and to speak with her directly was a really great way for me to learn more about Beacon before interviewing for a position I was really interested in. Read more →

There was only the slight shivery sense of...something else. Read more →

A Q&A with Adrienne Berard | I found the Lums’ case completely by accident. I was visiting the archives at Delta State University, researching my own family history in Mississippi, and happened upon a meeting of members from the Mississippi Delta Chinese Heritage Museum. The museum was just an idea at the time. The thought was that the archives would serve as a repository for the history of Chinese immigration in the Mississippi Delta. Read more → 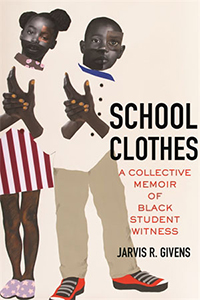