Lessons for Organizing: From the Depression to Amazon and Beyond

Lessons for Organizing: From the Depression to Amazon and Beyond

A Q&A with Jonathan Rosenblum | That’s a really good question, Matt. To the examples you gave, I would also add the fight to eliminate student debt. The Joe Biden administration is resuming mandatory debt payments for millions of workers in this country, which is going to be economically devastating. The Biden administration has also ended the eviction moratorium protecting people from eviction, millions and millions of working class people are now in jeopardy of losing their homes. Read more →

A Q&A with Jonathan Rosenblum | I’m really excited to be in this discussion with Canadian comrades about what’s going on here in the States and the prospects for organizing in the period ahead. I actually started out many decades ago as a rank-and-file union member in the newspaper industry, as a member of the International Typographical Union, which now I think is part of the Teamsters. Read more →

Starbucks Workers Need a National Day of Protest and Solidarity

Starbucks Workers Need a National Day of Protest and Solidarity

By Jonathan Rosenblum | It’s time for an all-labor national day of action to defend Starbucks workers. The Starbucks baristas, REI retail workers, Amazon warehouse workers, striking Warrior Met mineworkers and concrete truck drivers, along with other workers bravely organizing and fighting back, are at the forefront of resisting unbridled corporate greed in this new Gilded Age. But they won’t succeed if the fights are limited by region or industry. Read more →

Kshama Sawant: “We Won Because We Did Not Back Down”

Kshama Sawant: “We Won Because We Did Not Back Down”

Big Business Goes Up Against Democracy in Seattle

Big Business Goes Up Against Democracy in Seattle

Resisting Amazon Is Not Futile

Resisting Amazon Is Not Futile

By Jonathan Rosenblum | It seems eons ago, the youth-led climate strike of September 20, 2019 that brought four million people onto the streets worldwide. I was on the sidewalk outside Seattle City Hall, watching thousands of school-skippers march by. And then behind the teens came waves of exuberant people, no more than a decade or two older, their homemade signs held aloft: tech workers, including hundreds of Amazon workers who had stepped out of their comfortable cubicles and palatial glass towers to join the global walkout. Read more →

Lessons from the Amazon Tax Victory in Seattle

Lessons from the Amazon Tax Victory in Seattle

By Jonathan Rosenblum | Pressed by a relentless working class movement, the Seattle City Council on July 6 adopted a first-time-ever tax on Amazon and other big businesses that will bring in at least $214 million a year to fund affordable housing, Green New Deal projects, and union jobs. The win was a stunning turn of events: just two years earlier, Amazon, the Chamber of Commerce, the corporate-backed mayor, and several business-oriented labor leaders forced the city council to rescind a newly adopted tax on big business of only $47 million a year. Read more →

Our Labor Council’s Expulsion of Police Was Long Overdue

Our Labor Council’s Expulsion of Police Was Long Overdue

By Jonathan Rosenblum | Twenty years ago, in the middle of historic mass protests against the World Trade Organization, police chased hundreds of peaceful protesters out of downtown, north on First Avenue and surrounded them just half a block beyond Seattle’s iconic Labor Temple, preparing for mass arrests. It was December 1, 1999. As the police roundup unfolded, a group of us meeting inside the Labor Temple spilled out into the street. Ron Judd, the head of the King County Labor Council, whom I worked for at the time, was aghast to see the protesters essentially held at gunpoint. Read more →

Posted at 02:49 PM in American Society, Beyond $15, Jonathan Rosenblum, Politics and Current Events, Race and Ethnicity in America | Permalink | Comments (0)

By Jonathan Rosenblum | May 1 is here, which means rents and mortgages are due, and tens of millions of Americans will be unable to pay. Officially, thirty million people are newly unemployed. But the real number is higher, as government statistics fail to account for the 1.5 million-plus app-based drivers, other gig economy workers, independent contractors, and workers in the informal economy who have suddenly found themselves without work or income. Read more →

Amazon Is on the Attack Against Kshama Sawant

Amazon Is on the Attack Against Kshama Sawant

By Jonathan Rosenblum | If you want a preview of how corporate America intends to play in the 2020 elections, look no farther than what’s happening in Seattle’s municipal elections right now. Amazon just dumped $1.45 million into the local Chamber of Commerce political action committee, a record political buy aimed at radically remaking city government to suit the desires of the behemoth that now dominates the region’s economy. Read more →

Workers, Not Candidate Pledges, Will Always Be the Salvation of the Labor Movement

Workers, Not Candidate Pledges, Will Always Be the Salvation of the Labor Movement

By Jonathan Rosenblum | With the seemingly endless marathon of presidential electioneering approaching full stride, we now get to experience that quadrennial ritual of Democratic establishment candidates queuing up to pledge how they are going to save the labor movement by raising wages and making it easier for workers to organize into unions. Read more →

Posted at 11:34 AM in Activism, American Society, Beyond $15, Jonathan Rosenblum, Now More Than Ever, Politics and Current Events | Permalink | Comments (0)

A Q&A with Jonathan Rosenblum: I was tremendously heartened in the first days of the Trump administration in January to see thousands of people come out to airports around the US to protest the president’s travel ban. People mobilized because of what was at stake. It was not just the status of foreign travellers, but our core values as a society. In the echoing halls of airport terminals from coast to coast, a spirit of resistance and humanity came alive. Read more →

Posted at 01:04 PM in Activism, American Society, Beyond $15, Jonathan Rosenblum, Now More Than Ever, Politics and Current Events | Permalink | Comments (0)

A Q&A with Jonathan Rosenblum: In my experience bargaining union contracts and negotiating with politicians, I’ve found that it’s easy to overestimate the importance of what happens at the bargaining table. When I’ve led union negotiations, I’ve emphasized to bargaining team members that what we win in the end depends ninety percent on what we do outside of bargaining, and only ten percent on what takes place inside the room. Read more →

Posted at 01:29 PM in Activism, American Society, Beyond $15, Jonathan Rosenblum, Now More Than Ever, Politics and Current Events | Permalink | Comments (0)

Happy publication day to labor organizer Jonathan Rosenblum and Beyond $15: Immigrant Workers, Faith Activists, and the Revival of the Labor Movement! As recently as 2013, the call for a $15/hour minimum wage became a resounding rally cry against growing income inequality in the US. In Beyond $15, Rosenblum captures the inside story of the first successful fight for a $15 minimum wage. Just outside Seattle, an unlikely alliance of Sea-Tac Airport workers, union and community activists, and clergy staged face-to-face confrontations with corporate leaders, uniting a diverse, largely immigrant workforce in a struggle over power between airport workers and business and political elites. The workforce was made up of employees from Somalia, Ethiopia, Ukraine, Mexico, the Philippines, Iran, Iraq, India and other countries who joined forces with Christian and Muslim leaders. Rosenblum was director of the Sea-Tac campaign for the Services Employees International Union. Read more →

When I first heard the good news on February 3 that U.S. District Court Judge James L. Robart had slapped a restraining order on Trump’s travel ban, I texted a labor attorney friend: “Goodness—Judge Robart! Am I obliged to like him now?” You see, while millions of people are applauding Judge Robart for upholding the Constitution and blocking xenophobia, some of us have had a very different experience in his Seattle courtroom. Back in 2012, SeaTac Airport workers were hauled before him by attorneys for Alaska Airlines and the Port of Seattle. By the time they left Robart’s court, they had been stripped of basic workplace rights. Read more →

Posted at 02:52 PM in Activism, American Society, Beyond $15, Jonathan Rosenblum, Now More Than Ever, Politics and Current Events | Permalink | Comments (0)

The salvation of unions, and more generally, of the US working class, resides not in struggling to fix a broken national Democratic Party that repeatedly has betrayed workers, but in joining with allies to fight the coming Trump onslaught—and then to go beyond that to define a bold, unapologetic vision of society and economy, one that inspires millions of workers to engage and take action. This fight isn’t about blue states vs. red states, urban vs. rural, immigrant vs. native-born—all false frames that are intentionally deployed to divide and weaken working people—but about the 99 percent against the billionaire class and their political allies. It’s a fight about power and our societal values. Read more →

Posted at 03:46 PM in Activism, American Society, Beyond $15, Jonathan Rosenblum, Now More Than Ever, Politics and Current Events | Permalink | Comments (0) 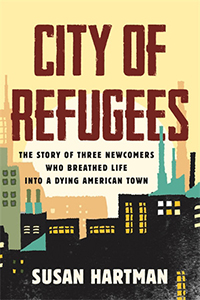