By Helene Atwan | Like most of us living in the US, I was sickened by this weekend’s news of shootings in El Paso and Dayton. Coming into work, feeling so stricken by these events, I was heartened by the fact that I could turn to a group of colleagues and immediately begin talking about what kind of resources we could offer in the wake of these senseless tragedies. I feel, as I often do, heartened to be working in an environment where it is our job to try to create these resources. Read more →

These Three States Took Banning Assault Weapons into Their Own Hands

These Three States Took Banning Assault Weapons into Their Own Hands

By Dennis A. Henigan | Gun control forces also have an impressive list of victories in the states. Since 1989, they have succeeded in passing Child Access Prevention (CAP) laws in eighteen states. These laws hold gun owners criminally responsible for leaving guns accessible to children. During that same period, the NRA also suffered key legislative defeats in New Jersey (legislation requiring that guns be “childproofed”), Maryland (legislation requiring internal locks on guns and limiting handgun sales to one per month), and Illinois (legislation requiring background checks for private sales at gun shows), while Colorado and Oregon (two states traditionally unfriendly to gun control) extended background checks to private sales at gun shows, both by voter referendum. Read more →

In the wake of the nationwide “March For Our Lives” events across the country this Saturday, Beacon Press is pleased to announce that all profits from this year’s print and ebook sales of two of our titles: “Guns Don’t Kill People, People Kill People” And Other Myths about Guns and Gun Control and Bullets into Bells: Poets and Citizens Respond to Gun Violence will be donated to both the Brady Campaign to Prevent Gun Violence and the Peace Center of Connecticut, Inc. Read more →

A List of Resources on Gun Control, Sexual Assault, and Healthcare in America

A List of Resources on Gun Control, Sexual Assault, and Healthcare in America

In light of the latest issues concerning gun control, sexual assault, and healthcare in America, we’re offering a list of resources for you to look through. The Las Vegas shooting that killed fifty-nine people and injured more than five hundred has us talking about gun control again. Even though, just a couple of weeks later, the media seem to have moved on to other topics, we need to keep the conversation going. Read more →

What Does The NRA Want? (And What To Do About It)

What Does The NRA Want? (And What To Do About It)

The National Rifle Association spent more than $30 million to elect Donald Trump President. Particularly with Republicans in control of both the Senate and the House, and a vacancy on the Supreme Court, the gun lobby will expect an impressive return on its investment. What will it want? Following the massacre of first graders at the Sandy Hook Elementary School, NRA Executive Vice President Wayne LaPierre infamously said that the lesson to be learned was: “The only thing that stops a bad guy with a gun is a good guy with a gun.” That phrase perfectly captures a core premise of Trumpism: that the nation is neatly divided into “good guys” (who have been forgotten by the elites controlling our government) and “bad guys” (Muslims, undocumented immigrants and “the others” who have been allowed to threaten the safety and well-being of the “good guys”). Read more →

Throughout this election cycle, we’ve seen the rise of the radical right reminiscent of the pull of ultraconservative organizations from the past; increasing calls to prevent new immigrants from entering our country; increased calls to improve gun control legislation; a resurging wave of religious intolerance against Muslim Americans; and nationwide protests imploring racial justice and economic progress. These issues and others that have made headlines in the news have become focal points in this year’s presidential debates. To help inform the conversation about these topics, we’re recommending a list of titles from our catalogue. Read more →

What Trump Vs. Clinton Means For Gun Control

What Trump Vs. Clinton Means For Gun Control

For the first time since 2000, the Presidential election promises to be pivotal for the politics of gun control. Both for supporters of stronger gun laws, and for “gun rights” partisans, the stakes could not be higher. It was not long ago that the political death of gun control was accepted as an incontestible truth by pundits of every ideological stripe. For the Democratic Party, although much was made of the alleged impact of the gun issue on the Gingrich takeover of the House of Representatives in 1994, the real turning point was the 2000 Presidential election. Read more →

The suggestion of politically-motivated violence against public officials is terrifying on its face, but it is certainly nothing new. Indeed, Trump’s comments are a specific application of the “insurrectionist” view of Second Amendment rights that has long been a core tenet of the ideology of the National Rifle Association and the far right. According to that view, the overriding purpose of the Second Amendment is to guarantee the populace the arms it may need to resist government tyranny. Read more →

Busting the Myths About Guns and US Gun Policy

Busting the Myths About Guns and US Gun Policy

A Q&A with Dennis A. Henigan: Certainly the horror of the December 2012 Sandy Hook Elementary School shooting, in which twenty first graders and six adults were struck down, has been a key turning point in the national gun debate. The loss of those innocent young children shocked the conscience of the nation. Prior to Sandy Hook, the conventional wisdom in the Democratic Party was that advocacy of gun control was simply not worth the political risk, although this thinking was based on an exaggeration of the NRA’s actual influence over election results. Read more →

When associate publisher Tom Hallock first suggested that Beacon publish a myth-busting book about gun control, we knew we had to move quickly. The urgency of this issue put the new book on a sped-up schedule. While discussing the idea with other staff members, it seemed everyone could rattle off countless gun “myths” that pop up time and again in conversations about the epidemic of gun violence in the US. I set about researching books covering gun policy and came across Dennis Henigan’s Lethal Logic. Read more →

I am sitting here, in my only orange shirt, in observation of National Gun Violence Awareness Day, and my thoughts turn to the New York Times’ remarkable recent study of 358 shootings last year in which four or more people were killed or wounded. As the Times noted, these were not the high-profile mass shootings in unlikely places like schools, churches and movie theatres that capture national attention, but rather “a pencil sketch of everyday America at its most violent.” The Times’ reporters penetrated beyond the body count to describe the circumstances of these shootings, in which 462 died and over 1300 were injured. The scenarios were varied, but the terrifying descriptions point to a conclusion common to all: if no guns were available, violence may have ensued, but countless lives would have been saved and serious injuries avoided. Read more → 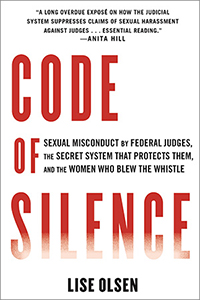 Now on Sale: Code of Silence