A BIG LAUNCH FOR “ONE RIGHTEOUS MAN” BY ARTHUR BROWNE 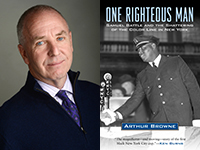 And keep an eye and an ear out for more. Sam Roberts writes about the book in his Sunday "Book Shelf" column in the New York Times on July 12th,  the author will be on WNYC’s Leonard Lopate Show the week of July 20th, and will soon appear on C-Span’s BookTV.