On June 7th, which marked the 100th anniversary of the birth of legendary literary figure Gwendolyn Brooks, Beacon Press published the biography, A Surprised Queenhood in the New Black Sun: The Life & Legacy of Gwendolyn Brooks by award-winning poet and novelist Angela Jackson. The book has received strong media coverage including featured excerpts and write-ups in Poetry, Poets & Writers, Essence, and LitHub. Jackson, along with Brooks’s daughter, Nora Brooks Blakely, were interviewed for NPR’s Morning Edition. Brooks's home town of Chicago supported the book with coverage in Chicago Magazine, on Windy City Live (Chicago-ABC 7), and on Midday News (Chicago-WGN).

In an interview with The Associated Press, Jackson said, “Gwendolyn Brooks was a truth teller. That is the most significant thing about her. The other thing is her accurate and honest depiction of black people and black lives. So much in America is marshaled against the realization that black people are human beings and Gwendolyn Brooks captured our humanity and lifted it up.” This piece was widely picked up by many outlets including the New York Times and the Washington Post. 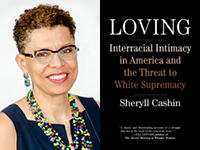 June 12th was Loving Day, and this year it marked the 50th anniversary of the 1967 United States Supreme Court decision, Loving v. Virginia, which finally struck down the remaining anti-miscegenation laws in America. Front and center in the media attention around this important date was Sheryll Cashin’s new book, Loving: Interracial Intimacy in America and the Threat to White Supremacy.

Some of the highlights from the publicity campaign include an interview on NPR’s Fresh Air, an adapted excerpt in the New York Times' Sunday Review section, and an appearance on the PBS NewsHour. Additional excerpts appeared at LitHub, AlterNet, and Salon.com. Cashin spoke on the Joe Madison Show, was interviewed for the program The Young Turks,  and appeared on Wisconsin Public Radio’s The Joy Cardin Show and Dallas Public Radio's  Think.