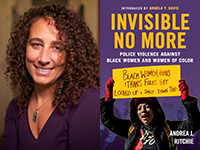 This past August Beacon released police misconduct attorney Andrea J. Ritchie’s Invisible No More, a timely examination of the ways Black women, Indigenous women, and other women of color are uniquely affected by racial profiling, police brutality, and immigration enforcement.  BITCH magazine writes, “Invisible No More will change the world.”

The book’s launch kicked off with an op-ed in the New York Times Sunday Review, followed by featured excerpts in The Guardian, ColorLines, HuffPost Women, The Advocate, LitHub,  Long Reads, and Salon. Ritchie has been interviewed on national radio programs, including The Takeaway/PRI and the Tom Joyner Morning Show, and on The Leonard Lopate Show/WNYC and the Morning Shift/WBEZ.  Q&As with her have run in  The Atlantic.com, BITCH, YES! Magazine, VICE, VIBE, and Ravishly.com.  Keep an eye out for upcoming coverage in Teen Vogue, Mother Jones, The Nation, and Curve.