LEARNING TO #RESIST WITH THE FEARLESS BENJAMIN LAY 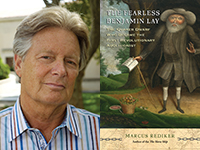 Earlier this fall Beacon had the pleasure of publishing a little known history, The Fearless Benjamin Lay: The Quaker Dwarf Who Became the First Revolutionary Abolitionist, by acclaimed historian Marcus Rediker. The book couldn't have come at a more opportune time. In a year when many traditional historic heroes have been literally and figuratively removed from their pedestals, Rediker introduced readers to a true hero; a man who fought fiercely for our democratic ideals and who deserves a prominent place in the larger drama of American history.

The media campaign kicked off with an opinion piece in the “Sunday Review” section of the  New York Times, followed by a review in Harper’s Magazine, excerpts in Smithsonian, Salon, and LitHub, a Q&A in The American Prospect, and a lengthy profile of the author in Pacific Standard. Reviews and feature interviews have also run in The Philadelphia Inquirer, the Pittsburgh Post-Gazette, Friends Journal, Atlas Obsura, and numerous other print, online, and broadcast outlets.