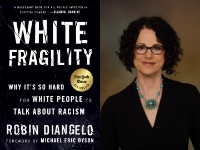 Beacon Press has a bestseller on their hands! After 10 weeks on the New York Times paperback bestseller list, White Fragility, by Robin DiAngelo, has climbed all the way to #5.

The campaign launched with a Q&A from USA Today, a lengthy review online at The New Yorker, and an interview on NPR’s Morning Edition. One topic from the book that received a lot of attention was the role of white women in systemic racism, and pieces from Elle and Harper’s Bazaar explored that issue in detail. An adapted excerpt that ran in Medium looked at issues of white fragility in the workplace, an op-ed with NBC.com's Think discussed racial illiteracy in white people, while a Q&A with Slate focused on why progressives find it so hard to confront their own contributions to racism in America. The book has also received extensive coverage in other outlets, including Weekend Edition, Pacific Standard, Sojourners, Washington Post, Vox, the Call Your Girlfriend podcast, MPR News , and The Record on KUOW Seattle.  PBS’s Amanpour & Company aired over the weekend and forthcoming interviews with Refinery29's online program Strong Opinions Loosely Held, The Big Think, and NBC.com are scheduled to air in the next few weeks, with even more to come.